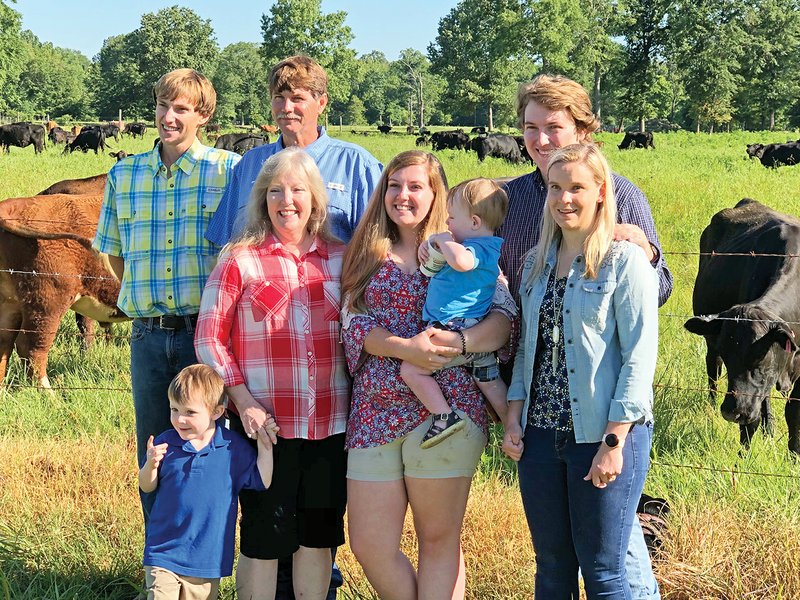 The Brecklings of Benton were recently selected as the 2019 Saline County Farm Family of the Year. In the front row, from left, are grandson Cillian Bradley, 4; Renee; Kaylee, holding her nephew, Alaric, 1; and Meghan. In the back row, from left, are Logan, Jim and Jeremy. ( Sam Pierce)

BENTON — Before Renee Breckling married Jim Breckling, she had only driven a tractor on her aunt and uncle’s farm.

“I drove it a little, but not nearly as much as I do now,” she said.

Renee and Jim met through some friends and have been married 32 years. They have four children, two grandchildren and one grand-puppy.

Her husband’s family has been farming for

55 years, and the farm has grown from its original 40 acres to operating 280 acres. The majority of the operation is Zoysia sod, which takes up 70 acres.

The Brecklings were recently named the 2019 Saline County Farm Family of the Year.

“It is an honor to know they think we are good enough to be Farm Family of the Year,” Renee said. “Yes, it was a surprise. We had no idea that we were even in the running for it.”

The farm started when Jim’s dad, Julius Breckling, saw the need for sod in Little Rock, when he was the parks and recreation director for the state.

“They had lived in Hot Springs and had done plants and stuff over there, but they just saw the need for this sod,” Renee said. “[Jim], his dad and brother started it.”

The farm is between Benton and Haskell, along the banks of the Saline River. Renee said being next to the Saline River provides a better-quality sod because of the nutrients deposited by the river.

“We live right up on the Saline River, and there is a little creek right there, and it has flooded and has washed so much, and this year it has been worse, but it does deposit nutrients into the ground, which helps,” she said.

The family currently has 120 acres for pasture. She said they got back into the cattle business because their kids wanted to do it. The family has an estimated 70 cows and three bulls. She said they haven’t sold any meat, but they have sold some of the calves.

The Brecklings also own Simple Sod LLC, a company that installs sod for home lawns and does some commercial work. The family also has Breckling Auctions Inc., run primarily by the couple’s youngest son, Logan Breckling. The auction business buys and sells farm equipment and other heavy equipment.

Renee said one of the goals for the farm is to expand its acreage and grow the best turf variety for the future.

“One of the main challenges of sod farming is not knowing how much you will sell year to year,” Renee said. “With our main consumers being homeowners, it can be very unpredictable.”

Logan graduated from Arkansas State University in Jonesboro with a degree in plant science and agriculture business in spring 2018.

“He’s come back home to improve and grow the farm,” Renee said.

Logan was also instrumental in adding one of the newest releases from the University of Georgia, TifTuf Bermuda grass. Renee said it is drought-tolerant turf for home lawns and sports fields.

She said some people come to the farm to purchase sod, and the family also sells directly to builders. She said customers can also make purchases directly through Simple Sod’s new website, but the success of the business has been mostly a result of word-of-mouth recommendations from customers.

“We plant rye grass for spring grazing and use rotational grazing,” Renee said. “This gives the grass some time to grow. We added the new TifTuf Bermuda variety for its drought tolerance.”

She said it uses 38 percent less water than other Bermuda-sod varieties. She said this will save countless gallons of city water used to water home lawns.

“It is a long process because it takes three years for the grass to grow back,” she said.

Kaylee Breckling, the family’s youngest child and only daughter, is a sophomore at Southern Arkansas University in Magnolia. She is studying agriculture business, with plans to come back home to farm and work in the auction company.

Thomas Breckling, the couple’s oldest son, graduated from the University of Central Arkansas in Conway in 2008 with a bachelor’s degree in political science, and from Florida Agricultural and Mechanical University Law School in Florida in 2011 with a Doctor of Jurisprudence degree.

Thomas works as compliance and regulatory adherence manager for Bank of America and is married to Emily, and they have two sons, Cillian Bradley, 4, and Alaric, 1.

Jeremy Breckling graduated from the University of Arkansas at Little Rock in 2015 with a construction-management degree and is project manager at Baldwin & Shell. He and his wife, Meghan, have a puppy, Bruce.

“We put out a good product for a good price,” Renee said, “and I think that’s been the key to our success.”