Arkansas ties for No. 1 in sales-tax ranking; rounding takes total levies to 9.47% 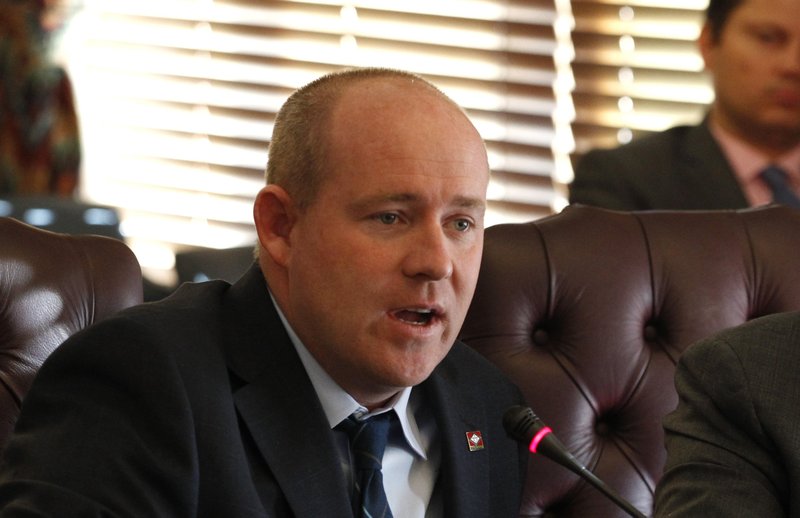 Rep. Jeff Wardlaw, R-Hermitage, is shown at the State Capitol in Little Rock in this file photo.

A consumer buying items around Tennessee and Arkansas won't notice much difference in the overall sales taxes paid.

Thanks to rounding, Arkansas and Tennessee have the highest combined state and local sales-tax rates among the 50 states, according to the Washington-based Tax Foundation.

"Technically, AR is still #2, if we go out to the third digit, so it's the same as in the past," the foundation's vice president of federal and special projects Nicole Kaeding said in an email last week to the Arkansas Democrat-Gazette. "It's just if we round that you're now tied for #1."

Without rounding, Arkansas' combined sales tax is 9.465%, while Tennessee's is 9.469%, said Garrett Watson, the foundation's director of special projects.

The nonprofit foundation describes itself as the nation's leading independent tax-policy research organization that has monitored fiscal policy at federal, state and local levels since 1937, according to its website.

Taxes for highways led to a big jump in Arkansas' sales-tax ranking in 2013.

In mid-2013, the state sales-tax rate rose from 6% to 6.5%. In the previous election year, Arkansas voters approved a constitutional amendment to increase the sales tax by a half-percentage point for 10 years to raise more money for highways and roads.

In the 2020 general election, Arkansas' voters will have a chance to permanently extend that sales tax for highways. The extension is in a constitutional amendment proposed by the Legislature in this year's regular session.

Rep. Jeff Wardlaw, R-Hermitage, who sponsored the 2020 amendment proposal, said in an interview last week that he is concerned about the sales-tax ranking's potential effect on the proposal.

"But I also think, though, that we are just continuing [the half-point increase] and I think that is going to make it easier for the voters [to approve it] because it is not a new tax," he said. "It is a continuation of a tax they have been paying for the last 10 years."

A year ago, Arkansas' combined sales-tax rate ranked third in the nation at 9.42%, Watson said.

"Arkansas jumped into second place in July due to a number of annexations, where cities were absorbed into neighboring localities with higher sales taxes," the foundation reported in its latest report.

"Annexations included Centerton, Pea Ridge and other small cities. The city of Hampton created a new local rate of 0.5 percent," according to the foundation.

According to the Tax Foundation, Louisiana has the third-highest average combined state and local sales-tax rate at 9.45%, while Washington has the fourth-highest at 9.21% and Alabama is fifth at 9.16%.

Local sales taxes are collected in 38 states, according to the foundation.

The foundation said it uses quarterly tax information at the state, county and city levels by ZIP code published by the Sales Tax Clearinghouse and weighs these numbers according to 2010 census population figures to give a sense of the prevalence of sales-tax rates in a particular state.

"Sales taxes are just one part of an overall tax structure and should be considered in context," the foundation's report said. "For example, Tennessee has high sales taxes, but no wage income taxes, where Oregon has no sales tax, but high income taxes.

"While many factors influence business location and investment decisions, sales taxes are something within policymakers' control that can have immediate impacts," according to the foundation.

In addition, the foundation said its report ranks states based on tax rates and does not account for differences in tax bases such as defining what is taxable and what is not taxable. For example, most states exempt groceries from the sales tax, other states tax groceries at a limited rate and still other states tax groceries at the same rate as all other products, according to the foundation.

Walter Anger, the state's revenue commissioner and a deputy director of the state Department of Finance and Administration, said 323 Arkansas cities and 74 Arkansas counties have enacted local sales and use taxes.

Anger said it is unclear whether the Tax Foundation factored into its calculation the caps on local sales and use taxes or the rebates available to taxpayers. It's also unknown if the foundation considered the reduced rate on groceries.

But Janelle Cammenga, a foundation policy analyst, said, "The Tax Foundation's semi-annual sales tax report is designed to compare general sales tax rates among states. As such, it doesn't include reduced rates on selected items."

Asked about the foundation's findings, Gov. Asa Hutchinson said Friday that "the Legislative Tax Reform and Relief Task Force discussed this issue at length throughout 2018.

"One of the debates centered around capping state and local sales tax at a certain amount, the latter of which fluctuates from county to county. While that item was not addressed during the most recent legislative session, I'm certain that conversation will continue as lead up to the next meeting of the General Assembly," the Republican governor said in a written statement.

"Meanwhile, it is important to note that in January of this year, we implemented the final cut to the sales tax on groceries. This reduced the sales tax revenue by over $60 million. This milestone means the state has decreased the sales tax burden for all Arkansans," Hutchinson said.

Under a law enacted in 2013 and signed by then-Gov. Mike Beebe, a Democrat, the grocery sales tax was reduced from 1.5% to .125%, effective Jan. 1 of this year using savings from the state ending its desegregation payments to three Pulaski County school districts.

Senate President Pro Tempore Jim Hendren, R-Sulphur Springs, who served as a co-chairman of the Legislature's tax overhaul task force in 2017 and 2018, said Arkansas has some of the highest sales-tax rates and very low property taxes compared with other states and both are difficult to fix. Property taxes are collected by counties.

Overhauling the state's property taxes would require voter approval of a constitutional amendment, he said.

The draft legislation wasn't politically viable in this year's session and could have jeopardized approval of other task force recommendations in the regular session, he said.

According to the Tax Foundation's latest report, Arkansas' statewide sales-tax rate of 6.5% ranks ninth in the nation and the average local rate of 2.97% ranks eighth.

Asked about counties' opposition to capping local tax rates, Chris Villines, executive director of the Association of Arkansas Counties, said that "all sales taxes are voted on by the county citizens, and many times these are for a specific purpose with a sunset.

"We have long advocated for local control and the ability for a county's citizenry to make the decisions that best suit them and their county's needs," he said in a written statement. "Also, many of our general sales taxes are shared with cities on a population pro-rata basis, which means taxes labeled 'County General Sales Taxes' may have a majority of money going to municipalities.

"Our property taxes are capped and unlike many states there are no provisions in the law for local income taxes ... meaning sales taxes are often the only means for counties to raise money to meet needs," he said.

As for cities' opposing a cap on their sales taxes, Mark Hayes, executive director of the Arkansas Municipal League, said in a text message to the Democrat-Gazette that "local electors make these decisions" and "municipal citizens determine what their public service needs are and whether and how much they are willing to pay to make those services a reality."

In addition, "the volume of sales tax exemptions in Arkansas is substantial," Hayes wrote in his text message. "Those exemptions limit revenues collected at ALL levels of government. If those exemptions were limited or removed, I feel certain we'd see rates drop."

Hendren said Arkansas' tax code puts a disproportionate share of taxes on low-income people largely because of its sales taxes.

"I think it is a discussion will continue to happen about how do we bring about fairness to low and middle-income taxpayers in Arkansas," Hendren said.

Rep. Joe Jett, R-Success, who is chairman of the House Revenue and Taxation Committee, said in an interview last week that "we can control 4.5% of the 6.5%" of the state's sales-tax rate.

"It is time to really take a look at this 6.5% [state sales-tax rate] to prune it back some" in a fiscally responsible manner, Jett said.

Rep. Jack Ladyman, R-Jonesboro, won the Legislative Council's approval last month for referring his study about the feasibility of reducing the sales tax from 6.5% to 6% to the House Revenue and Taxation Committee.

The study also will review the cost to state tax revenue and "the possible means of offsetting a reduction in state revenue through savings, income growth and other means," according to Ladyman's study.

Ladyman said in an interview last week that he supported putting on next year's ballot the proposed constitutional amendment to make permanent the half-percentage-point sales tax for highways and roads because "I think our roads are in bad shape [and] we do need to do something quickly.

"I thought ... we can go ahead and do this and maybe in the interim we came come up with enough funds [of about $280 million] through efficiencies and whatever and reduce the general sales tax by a half cent," he said. "I think it is a possibility."

Print Headline: State ties for No. 1 in sales-tax ranking