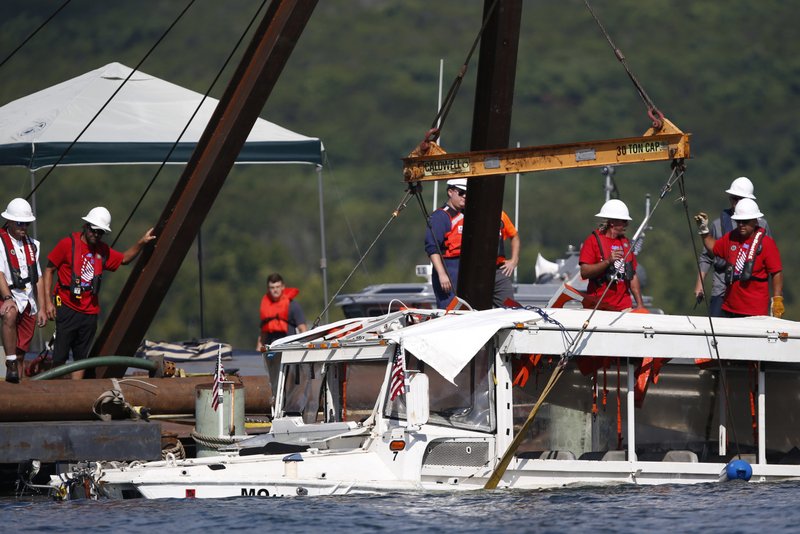 FILE - In this July 23, 2018, file photo, a duck boat that sank in Table Rock Lake in Branson, Mo., is raised after it went down the evening of July 19 after a thunderstorm generated near-hurricane strength winds, killing 17 people. A year after a duck boat sank and killed 17 people in a Missouri lake, the future of the tourist attraction remains a topic of debate. (Nathan Papes/The Springfield News-Leader via AP, File)

One year after 17 people died when a boat sank on a Missouri lake near Branson, the question of whether the boats should return to the lake remains a topic of debate.

Former Branson Mayor Karen Best had to inform the families that their loved ones had died when the boat sank during a storm on July 19, 2018, on Table Rock Lake. She said she will never forget the cries and screaming of the families and boat-sinking survivors.

"I don't know that they need to come back to this community," Best said of the duck boats.

The amphibious vehicles operated on land and water, were a popular attraction in Branson for nearly 50 years. They are not operating this year, and Ripley Entertainment, which owns Branson Ride The Ducks, has not said whether they will return, The Kansas City Star reported.

Current Branson Mayor Edd Akers, who was elected in April, said it's possible the duck boats will return if they are altered and have better safety features.

"They're still operating in other parts of the country," he said. "They are still successful in different areas. You know, if they are meant to come back and are supposed to come back, I think it could."

Akers acknowledged that the boats are a sensitive topic because of the tragedy.

Thirty-one people were aboard when the duck boat entered the lake. The storm came up suddenly, and the waves swamped the boat before it could make it back to shore. Fourteen people survived.

The Smiths' lawsuit notes the "deadly history" of duck boats.

"At least 39 people have died in Duck Boat accidents since 1999," according to the suit, which cited a 1999 duck boat sinking on Lake Hamilton near Hot Springs that killed 13 people.

According to the Smiths' suit, the duck boat captain was instructed to alter the normal route and give the "waterborne portion" of the tour first.

Passengers began to board at 6:29 p.m., and a severe thunderstorm warning was issued 3 minutes later, according to the suit.

"However, defendants proceeded with boarding and the duck boat tour began anyway," according to the suit. "The duck boat entered the waters of Table Rock Lake at 6:55 p.m., more than 20 minutes after the severe thunderstorm warning was announced."

Shortly after entering the water, the waves began to "whitecap," and the winds increased in velocity, according to the suit.

"The captain ordered the plastic side curtains lowered over the windows on the duck boat at 7 p.m.," according to the court document. "This decision later prevented passengers' escape through the windows of the duck boat."

On July 11, the Smiths and Ripley Entertainment filed a joint application for approval of a confidential wrongful-death settlement. It hadn't been approved by a federal judge as of Saturday.

"Defendant has denied, does deny and continues to deny all liability whatsoever for the death of the decedents and the alleged injury to Loren E. Smith, a minor," according to the application.

The agreement stated that the confidential sum would be a settlement in full for "any and all claims" the Smiths may have now or in the future against Ripley Entertainment and other "released parties," including Branson Duck Vehicles LLC.

Some witnesses aboard the Showboat Branson Belle and first responders who tried to save people from the duck boat have struggled with emotional and psychological scars left from the tragedy.

"I have good friends who were on the showboat, either working there or saw the tragedy take place," Akers said. "Start talking to them and their eyes water because they saw things that they don't like to remember."

Stone County Sheriff Doug Rader recalled "utter chaos" at the scene and being told that 31 people were aboard the boat but not being able to see many survivors.

"In almost 30 years of law enforcement, that was probably one of the most traumatic events I have been involved in," he said. "I had a deputy on there [the Belle] who jumped in and helped save people and dragged the deceased out of the water. He'll forever be affected by that. The emotional impact it made on everyone in this area, that tragedy will never be forgotten."

Tia Coleman of Indianapolis lost her husband, three children and five other relatives in the sinking. She said in a statement Tuesday that she draws energy from the memory of her family as she continues her fight to ban "dangerous, death trap duck boats like the one that killed my family and the others."

Interviews with tourists visiting Branson recently found that they were divided on whether the duck boats should return. Some said the attraction should open again because the sinking was a freak accident caused by a storm that came up too quickly or because of bad judgment by the operators. Others said they would never consider riding the boats, even if they were altered.

Court filings by Ripley Entertainment this month show that 19 of 33 others who have filed claims against the company have settled their cases. Three duck boat employees, including the captain, Kenneth Scott McKee, 52, face criminal prosecution.

Akers said that once all the lawsuits are settled, he will propose that the city create a memorial to the duck boat victims.

"I want a peaceful, reverent place," the mayor said, "close to the lake where families of those lost family members, or those who were affected by the tragedy, could come and pay their respects. That would, to me, be the ideal way to honor those folks."

U.S. Sen. Roy Blunt of Missouri says everyone affected by the duck boat tragedy "deserves answers," and he is urging federal agencies to wrap up their investigations.

The Republican senator released a statement Friday marking the one-year anniversary of the duck boat sinking. He says the U.S. Coast Guard and National Transportation Safety Board have had "more than enough time" to finish investigating and issue recommendations and new safety measures.