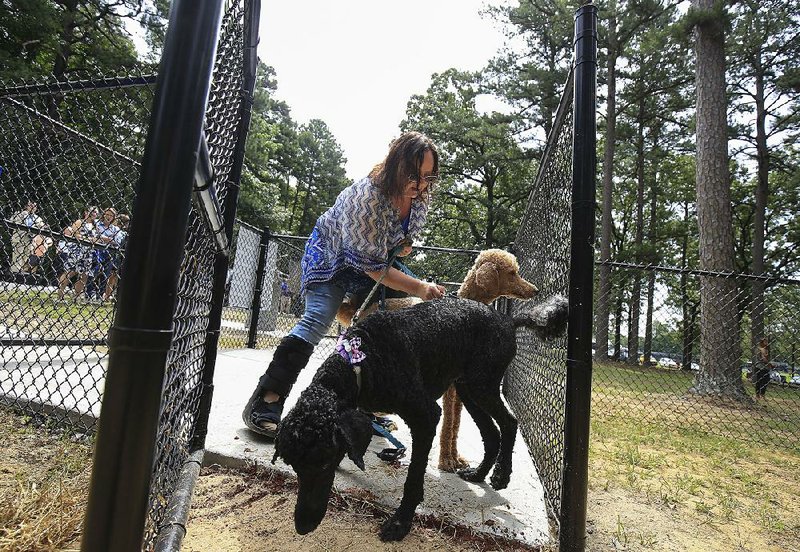 Candace Barron unleashes her poodles, Remington (front) and Demi, on Monday as she enters the new dog park at North Little Rock’s Burns Park. More photos are available at arkansasonline.com/723dogpark/

Several North Little Rock canines and their owners celebrated the dog days of summer Monday morning at the opening of the city's new off-the-leash dog park in Burns Park.

The former city dog park on Tournament Drive in Burns Park closed after Arkansas River flooding in late May and early June, followed by rainstorms that downed trees at the old dog park. The former dog park, in a low-lying area close to the riverfront, was prone to river flooding and kept wet from any rainfall.

Nyx, a 2-year-old flat-coated retriever, was the first dog to bound inside the new park's area for large dogs. Two fenced sections are divided for dogs weighing less than and more than 30 pounds. Nyx's owner, Adriane Stramel of North Little Rock, said she liked the tree-lined park's shade and dry ground, unlike the usual wetness of the former dog park.

"Only when I had time to give her a bath afterward," Stramel said of how often she would take 60-pound Nyx to the old dog park. "This will be a whole lot better. It always had a mud hole, and she always found the mud hole."

Nearby, Phoebe, a 3-year-old, 30-pound hound mix, was sniffing out the new area as owner Elizabeth Huggins of North Little Rock watched.

"We went almost every day, especially in the summertime," Huggins said of how often she would take Phoebe to the former dog park, even when the ground was usually wet. "We would come home and she'd have to have a bath almost every day. This will be better. But she enjoyed playing in the mud."

City Parks and Recreation Director Terry Hartwick thanked city workers for finding a new location and getting the dog park ready in less than a month's time. Hartwick announced June 28 that he wouldn't reopen the severely damaged, former dog park.

[Video not showing up above? Click here to watch » https://www.youtube.com/watch?v=PxrTUW5GOeI

"What we like about it is the shade and it being close to restrooms," Hartwick said of the 1½-acre site. "There are two parking lots, and we put in handicapped parking [in front]. I think this will be used more than the other one."

Smith presented Hartwick with a mayor's proclamation to recognize the new dog park and its name. Barks and Rec won out over four other finalists chosen from almost 700 entries, Parks Special Projects Director Jeff Caplinger said. Barks and Rec received 38% of the vote, and won by about 40 votes over runner-up Bark Park, he said.

Other finalists, in order of finish, were Paws in the Park, Barkland and Paws Playground.

Smith joked that he might want to issue a special order to recognize Hartwick's effort in creating the new dog park so quickly, calling the area Terry 'Barkwick' Park.

"When you get a dog park as pretty as this, I'm surprised we didn't have it originally, because it's the perfect place," Smith said. 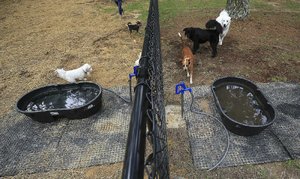