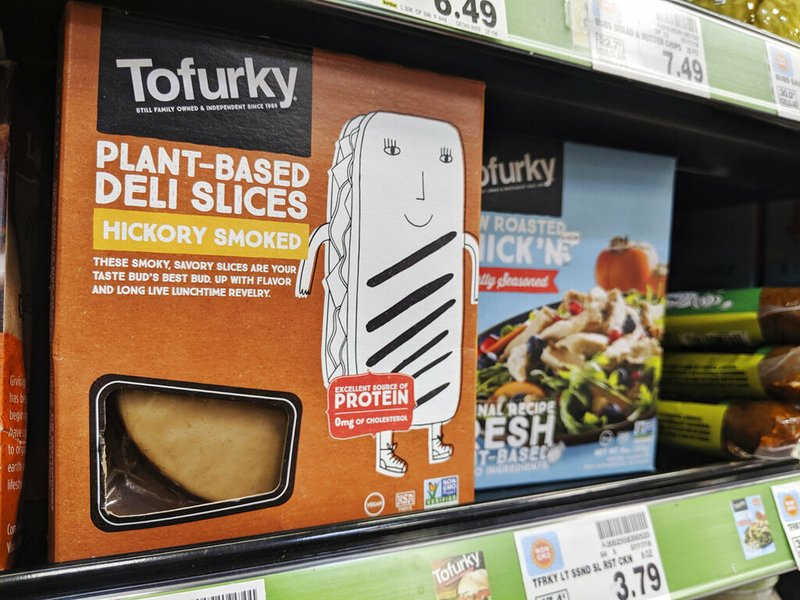 Tofurky brand plant-based "deli slices" are sold at a Little Rock grocery store in this Monday, July 22, 2019 photo. The ACLU and other other rights organizations filed a lawsuit in federal court on Tofurky's behalf claiming an Arkansas law that will ban the use of "meat" in the labeling of its products violates free speech rights. (AP Photo/Hannah Grabenstein)

A maker of "smoked ham style" tofu slices is challenging an Arkansas labeling law that would impose fines on meatless products with a reference to meat on the package label.

Legislation that passed earlier this year and takes effect this week made it possible for the state to fine companies up to $1,000 per package for labeling their plant-based or cell-based products as "beef," "pork," "poultry" and other meaty terms.

In response to the state's soon-to-be-enacted law, a group of nonprofit advocacy groups sued the state in federal court in Arkansas on behalf of the company Tofurky, arguing that the act violates federal free speech and due process clauses in order to shore up the state's meat and rice industries.

Under Act 501, Tofurky's "plant-based jumbo hot dogs" and "smoked ham style plant-based deli slices" could not be sold in the state without being subject to a fine, the company said in the lawsuit. The act also prohibits the selling of products labeled as "almond milk" and "cauliflower rice," but not "riced cauliflower," for not containing any actual dairy or rice.

The Arkansas law is similar to other "truth in labeling" laws recently passed in Missouri, Mississippi, Louisiana, South Dakota and other states. While agriculture interests view these laws as protection for farmers and the general public, critics like Tofurky claim they are the result of directives from special-interest donors.

"When consumers choose plant-based foods, it is not because they are confused or misled, it is because they are savvy and educated about the health and environmental consequences of eating animal products," said Jaime Athos, chief executive officer of Tofurky, in prepared remarks.

"What's really going on here is that the state of Arkansas is seeking to limit access to healthier, more sustainable food choices for its constituents, and it is doing so to benefit the animal agriculture industry," Athos continued.

Farmers and members of the state's rice and cattle associations spoke in favor of the measure when it was debated before the House Agriculture Committee earlier this year. At the time, they said they did not want companies to piggyback on the name of products such as rice, meat and poultry with their imitation products.

"We view it as a labeling clarification," said Travis Justice, chief economist of the Arkansas Farm Bureau. "Not to confuse nonmeat items with actual meat items."

Justice said it goes back to the issue of dairy and nondairy milks. The Food and Drug Administration has allowed products such as almond and soy beverages to be sold as milk, even though the agency defines milk as a beverage that comes from a cow. He said this, in part, has led to the drop in sales of traditional milk.

"We're trying to prevent some of the connotations that they've gone through, with the meat industry," Justice said.

Turtle Island Foods SPC -- doing business as the Tofurky Company -- sued Nikhil Soman, in his official capacity as the director of the Arkansas Bureau of Standards. The nonprofit advocacy groups, including the American Civil Liberties Union, Animal Legal Defense Fund, Good Food Institute and ACLU of Arkansas, filed the complaint on behalf of Tofurky.

Act 501, sponsored by Rep. David Hillman, R-Almyra, was signed into law in March and becomes effective Wednesday. Hillman did not immediately return a message seeking comment on Monday.

Arkansas was the sixth state to pass similar legislation and the only one to include rice.

The case Tofurky v. Soman is 4:19-cv-514. It was filed in the U.S. District Court for the Eastern District of Arkansas, Western Division.