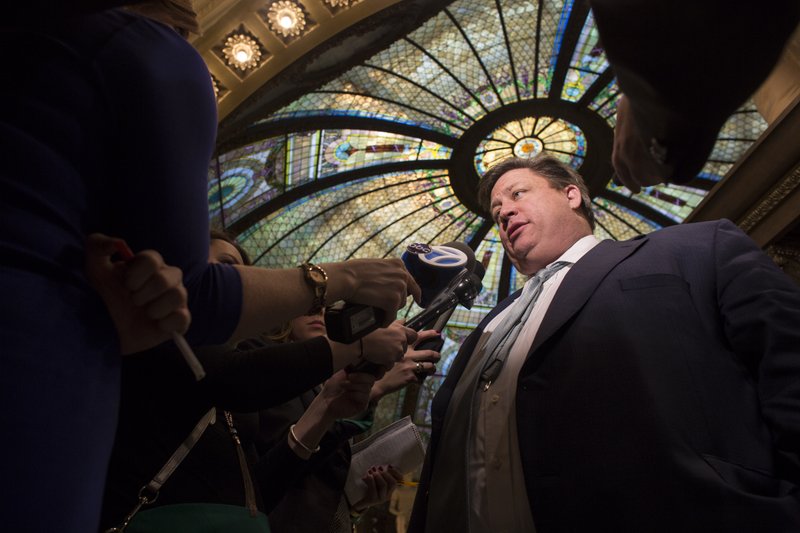 FILE — Attorney Bill James is shown in this 2016 file photo.

A North Little Rock detective ignored evidence that pointed to a man known only as "KD" as a potential killer and pressured a key witness into falsely implicating a teenager in a January 2018 homicide, the 18-year-old defendant's lawyer told a Pulaski County jury Tuesday.

Killed by bullets from two guns, McGuire was dead on a couch with a pool of blood at his feet when police arrived, his own gun drawn but never fired.

Once Gibbons had Thompson in his sights, the investigator never looked further, even after one of the murder weapons was found in the home of another man, James told the seven men and five women of the jury.

"There's no [physical] evidence Shaquan was even there, let alone that he did anything," James said. "Nobody cares what is true. [Gibbons] didn't care. He thinks it's Shaquan. He'd decided it's him."

Thompson and co-defendant Typaris Rome Johnson, 20, are being tried separately. They were arrested about six weeks after McGuire was killed.

The victim had been visiting the apartment of a female friend and her children to smoke marijuana. The woman, Courtney Hunt, 26, initially denied that Thompson was ever there, telling police that Johnson and a young man named KD had been at her home when the shooting started.

But pressed by Gibbons, Hunt changed her story and replaced KD with Thompson, James said.

That change came when the detective suggested that the mother of five might lose custody of her children if she didn't cooperate with police, the attorney said.

"It sounds like a threat to me," James told jurors. "Would someone lie to protect their kids ... to keep their kids from being taken away from them?"

On the witness stand, Hunt snapped back when James asked if the detective had threatened her, insisting that she was telling the truth that Thompson -- not someone named KD -- was with Johnson when McGuire was killed.

"[Gibbons] didn't threaten me. That man did not threaten me," she testified. "He was just letting me know the truth matters."

When James described KD as a "make-believe person," Hunt said KD is real, he just wasn't at her home when McGuire was killed.

"Are you just putting people randomly in a shooting?" James responded. "Do you dislike KD?"

Hunt told jurors that she'd been talking to the detective just after a man had been killed in her living room and was still rattled.

"I was in emotional distress," she said. "I've never been in that situation before. It was overwhelming to me. I was just scared."

"Every time you mention KD, that was a lie?" James asked.

"I guess it is. He wasn't there," Hunt responded.

Hunt and James sparred continuously during the attorney's 50 minutes of cross-examination Tuesday. She is to return to the witness stand when proceedings before Circuit Judge Leon Johnson resume at 9:30 a.m. today.

Sometimes muttering to herself when she didn't like James' questions, Hunt punctuated her testimony with deep sighs, crossed arms, head shakes and eye rolls.

She told the attorney that she remembered little of what she told police, responding to James' questions at least two dozen times by saying "I don't recall" or some variation.

"I can remember what happened in my apartment and that's it," Hunt testified.

Gibbons will get to tell his version of events when prosecutors Erin Driver and Jennings Morgan call him to the witness stand, likely today.

With no witnesses to the actual shooting, Morgan outlined a circumstantial case against Thompson, telling jurors that Hunt witnessed the defendants arguing with McGuire moments before he was killed.

Two children in the apartment, before hearing shots, saw Thompson get a pistol from the bedroom, then enter the living room where McGuire was killed, he said.

Hunt, fearing for the safety of her children who were in the bedroom, left the living room to go to them when Johnson pulled out his pistol to confront McGuire, angry because the older man had accused him of hogging the marijuana cigar, known as a "blunt," being shared among the four, the prosecutor said.

Hunt was in the bedroom with seven children, two of whom she was baby-sitting, when the sound of gunfire in the next room led them to flee out of a back bedroom to safety, Morgan told jurors.