Sun wins 200, then gets cold shoulder 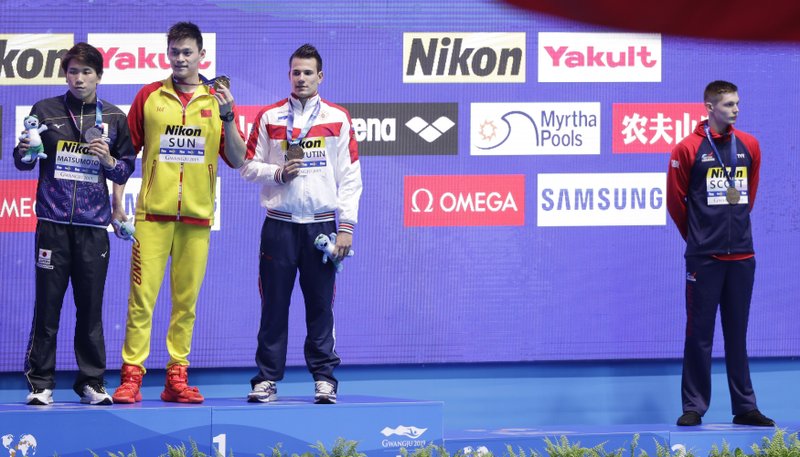 GWANGJU, South Korea -- Sun Yang was in the middle of controversy at the world swimming championships again. Only this time, it wasn't his doing.

The Chinese star with a history of doping still got shunned on the medals podium.

Sun won the 200-meter freestyle on Tuesday night after Danas Rapsys of Lithuania finished first and got disqualified for an apparent false start.

Sun touched second, but was elevated after Rapsys had already celebrated in the pool.

Sun appeared surprised, clasping his hands to his face, but quickly sat on the lane rope and raised both arms in the air as a mix of cheers and boos rang out.

On the podium, Scott wanted no part of sharing the moment with Sun.

Scott kept his hands clasped behind his back and refused to shake Sun's hand, standing off on his own while the other medalists joined Sun to pose for photographers.

Sun, who served a three-month doping ban in 2014, is being allowed by FINA to compete in Gwangju ahead of a Court for Arbitration in Sport hearing in September that threatens Sun's career.

After Sun won the 400 free, silver medalist Mack Horton of Australia refused to step on the podium or acknowledge Sun during the medals ceremony. FINA, swimming's governing body, sent warning letters to Swimming Australia and Horton for his actions.

"FINA has currently done more to reprimand Mack Horton than they have done to reprimand Sun Yang," said American Lilly King, who won the women's 100 breaststroke.

Sun has been accused of smashing vials of his blood with a hammer during a clash last year with testers, and faces a lifetime ban if found guilty.

"He does quite a good job of making sure everyone continues to know about it," Scott said, referring to Sun's pending doping case. "So I guess that's all I've got to say about that."

Sun spread his arms apart and looked at Scott as the Brit turned to come off the podium.

Sun and the other two medalists stopped for photographers on the pool deck, but Scott kept on walking.

"The athletes are starting to stand up for themselves and stand up for what they believe in, so I commend them," King said. "That's incredibly brave."

There were more boos -- and cheers from Chinese fans -- in the crowd at Nambu University Municipal Aquatics Center.

"The most important thing as a sports person is you have a right to a voice," Peaty said. "Duncan shared his voice and so did the crowd, so it's completely fair."

Sun, the current Olympic champion in the 200 free, earned his third straight medal in the event at worlds and second gold in a row.

In contrast to their run-in at the Rio Olympics, King and Russia's Yulia Efimova kept all the drama in the pool in the 100 breaststroke.

They were neck-and-neck down the stretch before King got her hand on the wall first, touching in 1:04.93.

Efimova was second in 1:05.49. Martina Carraro of Italy took bronze.

King and Efimova clasped hands over the lane rope. Later, Efimova clapped as King took the top spot on the podium and they embraced and kissed after the ceremony.

Earlier Tuesday, the American star withdrew from the final because of unspecified illness. Ledecky also dropped out of the 200 freestyle heats.

Olympic and defending world champion Ryan Murphy was upset in the men's 100 backstroke.

Evgeny Rylov of Russia took silver and Mitch Larkin of Australia got bronze.

Murphy, who was under his own world-record pace at the turn, faded to fourth. Fellow American Matt Grevers was fifth.

Kathleen Baker of the U.S., the world record holder, tied for sixth after being tied for the lead at the turn. 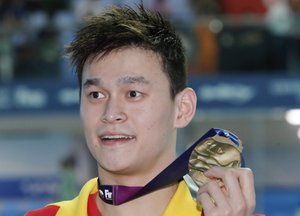