Tech YouTuber has Ultimate side gig 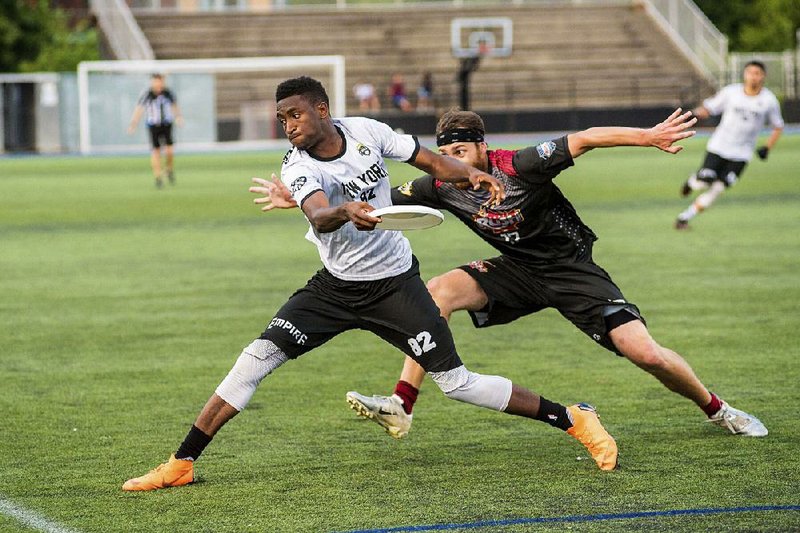 Brownlee, who plays for the New York Empire in the American Ultimate Disc League, is a tech YouTuber. His channel has 8.9 million subscribers, and he makes hundreds of thousands of dollars a year reviewing products and interviewing tech giants like Bill Gates and Elon Musk. His videos average almost 1 million views per day.

In his YouTube bio, Brownlee refers to himself as a geek, tech head and internet personality -- but not an athlete. He rarely mentions the sport -- usually referred to as just Ultimate -- in his videos, but he blocks off ample time for his athletic pursuits. His double life is clearly delineated on his calendar, which he keeps down to the hour, months in advance. YouTube on weekdays. Ultimate on the weekends.

"A lot of the companies I work with, they're not returning my calls or emails on weekends," Brownlee told The Associated Press after a recent playoff victory for New York. "So weekends are weekends for Ultimate."

His YouTube career has allowed him to meet fans around the world. And when he's on the field, his day job is the reason he gets recognized.

At a game in Washington, an opponent, Joe Richards, lined up to guard him. Before play restarted, Richards leaned over to say something.

"I started playing Ultimate because of you," Richards said.

Brownlee said he's accustomed to that sort of interaction. He feels a responsibility to use his celebrity to promote Ultimate -- a game similar to football that uses a plastic disc instead of an oblong ball.

"We're not really doing it for the salary," he said. "This is a promotional thing for the sport."

So far, however, the league hasn't done much to leverage Brownlee's fame.

"I'm not going to say it hasn't been a thought," team owner Barbara Stevens said. "He is a professional player for the New York Empire. That is my requirement for him: to show up at games ready to play Ultimate. I know people think I'm crazy, but I'm not going to change my philosophy."

Brownlee's extreme long-shot goal would be to play in the Olympics. The International Olympic Committee has recognized Ultimate, but the sport didn't make the shortlist for inclusion in the 2024 Games in Paris, leaving 2028 in Los Angeles as the next possibility.

"That's the dream for the sport," Brownlee said. "Just to share the airtime with all the other sports so that it gets the respect that it deserves."

Brownlee's start in Ultimate was as matter-of-fact as his launch on YouTube -- he just signed up. The sport originated in 1968 at his high school, Columbia High School in Maplewood, New Jersey, and he joined the team with only a Frisbee camp under his belt.

While at that same high school, he frequented YouTube for product reviews, but he found the content unsatisfying and realized there was a deficiency in the market. In 2009, at age 15 and with no formal training, he posted his first video, under the username MKBHD.

"Proudest moment on YouTube," he said of the milestone. "It's kind of mind-blowing. I couldn't imagine that many people listening to what you say."

His celebrity has also brought him into contact with mainstream athletes. Kobe Bryant interviewed Brownlee in 2015 for the then-Lakers star's shoe launch. Even then, Brownlee tried to work Ultimate into the conversation.

Brownlee's teammates don't quite know what to make of his off-the-field stardom.

"We're all flabbergasted by the success he's been having right now," Empire player Conor Kline said. "Marques is a great guy. Despite having a great on-camera personality, he's a little more timid in real life than you might expect from him. But I think over the years, he's really opened up. He's got a heart of gold. He's a competitor."