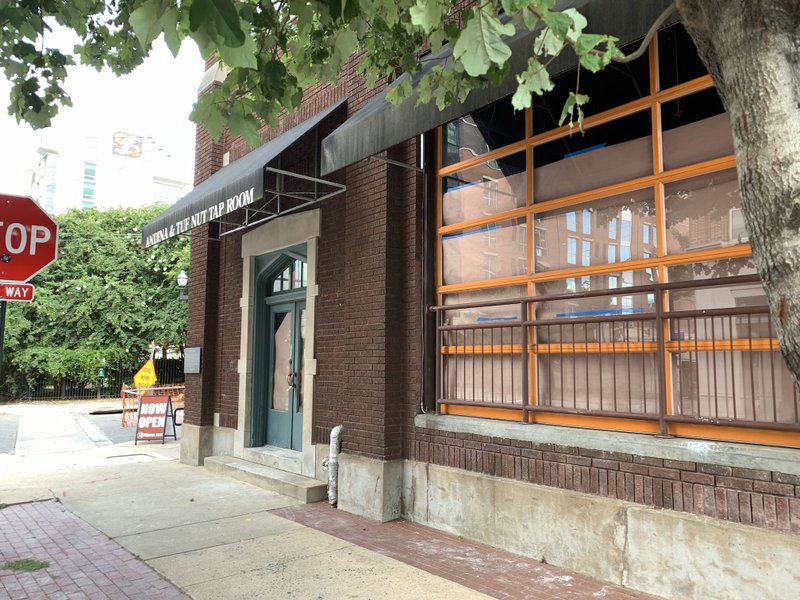 Homer's North? It's a possibility, or possibly more possible than that. Earlier this week, our Jake Sandlin reported that David Connell, son of Homer's late founder and namesake Homer Connell, approached North Little Rock Mayor Joe Smith via letter stating that he is "very excited and motivated" about the possibility of obtaining a term lease to place a Homer's in the new fixed-base-operations building at the North Little Rock Municipal Airport, 8200 Remount Road. Smith in turn put a proposal to the City Council, which Monday night approved a $4.5 million revenue bond for a new terminal building, a corporate aircraft hangar, a restaurant and expanded parking. Smith and airport director Clay Rogers said they hadn't planned on putting in a restaurant but changed their minds after receiving Connell's letter. "We weren't going to do a restaurant until we had a commitment from a reputable, successful restaurateur," Smith said. "We got that with Homer's. We needed a restaurant to make that place a destination." Homer Connell, who opened the original restaurant at 2001 E. Roosevelt Road in 1986 and Homer's West at 9700 N. Rodney Parham Road in 2012, died in 2016. Timeline for the airport reconstruction and the restaurant is not yet fixed.

Dickey's Barbecue Pit franchisee Lonnie Shere says his target is now Aug. 15 to open an outlet of the Dallas-based chain/franchise operation — serving what is primarily a Texas-style barbecue menu — in the former Starbucks, 9401 N. Rodney Parham Road, Little Rock. The restaurant will have inside seating, a drive-through and "an awesome patio" on which Shere says he's planning to put a 1941 Chevy pickup from which he has removed the bed and into which he has put a table. Shere's experience, as we have reported, has been with Sonic Drive-Ins; this is his first Dickey's franchise. Tentative hours will be 11 a.m.-9 or 10 p.m. daily. The phone number is (501) 223-3425. He'll also run a catering operation out of the site and has plans to open another Dickey's near the confluence between North Little Rock and Sherwood. There was briefly a Dickey's, now defunct, at 13503 Crystal Hill Road, North Little Rock, on the edge of Maumelle; the website, dickeys.com/location, shows central Arkansas outlets at 3213 Main St., Bryant, and 407 S. Main St., Searcy, and Northwest Arkansas locations in Rogers, Lowell and Fayetteville (including three at Razorback Stadium and two at Bud Walton Arena).

Sam Henson, co-owner of HEA Street Eatz and Catering, 6015 Chenonceau Blvd., Suite 180, Little Rock, next door to NYPD Pizza, said Tuesday that final inspections are in progress and that he's expecting to open on time Monday. Hours will be 6 a.m.-7 p.m. Monday-Saturday. The phone number is (501) 673-4006.

We don't know yet what's going in there, but there's brown paper over the windows of the former Andina Cafe and Coffee Roastery and Tuf-Nut Tap Room, 423 E. Third St., Little Rock, and one of our eagle-eyed readers reports the interior has been gutted. Owner Nita Westbrook shut the place down at the end of 2018.

Meanwhile, after several years, the brown paper has come off the windows of the retail space across the street at 402 E. Third St., which was supposed first to be the site of the resurrection of The Shack and which restaurateur Tim Chappell subsequently declared would become another, less prestigious barbecue place that never quite came to fruition. Construction is taking place inside — it looks like a wall is in progress separating the two sides of the storefront, and there's a "space for lease" sign on the left side. 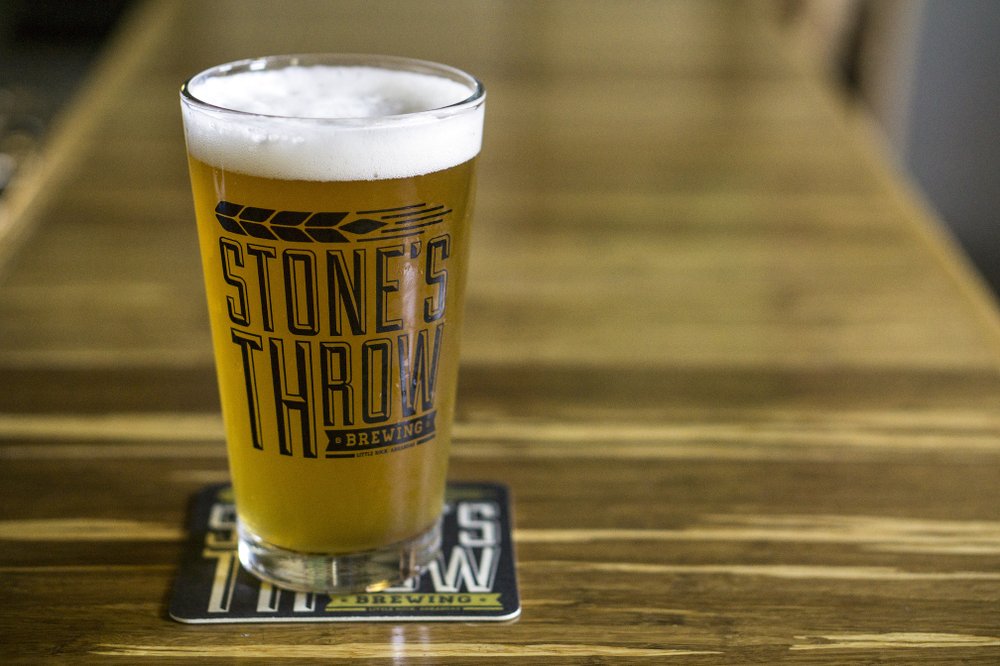 Stone's Throw Brewing is marking the sixth anniversary of the pouring of its first pint in 2013 with its annual "Block on Rock Birthday Bash" festival, 4-10 p.m. Saturday. Food trucks, music and "community engagement opportunities" will set up in the two blocks of Rock Street adjacent to the original location, 402 E. Ninth St., Little Rock. The 700 and 800 blocks of Rock Street, north of the brewery, will be closed off; you'll be able to enter at the intersections of Rock and Seventh, Eighth and Ninth streets. Stephanie Smittle takes the stage at 5 p.m., followed by N'Finiti at 6:30 and the Big Dam Horns at 7 — on the main stage. Fassler Hall, 311 E. Capitol Ave., which is sponsoring the entertainment, will also host the official Block on Rock After Party.

On the lawn of the Pike-Fletcher-Terry Mansion, between Seventh and Eighth streets on Rock, will be a giant biergarten, a marketplace featuring area artists, businesses and community groups and the Central Arkansas Kubb offering lessons on how to play the game of Kubb, aka "Viking Chess." First Lutheran Church, Eighth and Rock streets at the center of the festival, will offer a cooling station and game room, and you can get a free tour of the 1888 church.

Stone's Throw is collaborating with other area breweries — Flyway Brewing, Rebel Kettle Brewing, Buffalo Brewing and Diamond Bear Brewing — to create "unique offerings for the festival, including IPAs, beer made with local blueberries picked by the brewers and even hard seltzer waters. Stone's Throw will also release a special festival beer, Block on Rock Blonde, at the event." Oh, and Stone's Throw Stifft Station, 3015 W. Markham St., will be closed this weekend to let the brewpub chieftains concentrate on the downtown celebration.

Admission is $5, free for children 10 and younger accompanied by an adult. Guests are welcome to take portable chairs and refillable water bottles, but otherwise no outside food or drink is allowed. A portion of all revenue benefits Preserve Arkansas; the 2018 event raised more than $6,000 for the group. Visit stonesthrowbeer.com.

We mentioned last week that Damon Helton, co-owner of Benton's Olde Crow General Store, also occupies much of the space at Benton's Main St. Station, 301 N. Main St. (at Conway Street). One of our eagle-eyed colleagues called our attention to another Main St. Station tenant who, according MySaline.com, is moving: Just Ice Cream, which opened in April, is headed for a bigger space at 115 N. Market St., previously the home of Silver Linings, Twigs and Leave It to Liz. Keep track of the plans of owners Jonathan and Tia Wind's plans via Facebook and Instagram.

And speaking of frozen dairy products, You Scream Holdings LLC, central Arkansas franchisee for Dairy Queen, will open a location in "late fall" in the former Western Sizzlin Express, 43 S. Broadview St., Greenbrier. It will be You Scream's biggest store so far, topping its other six locations — in Sherwood, Little Rock, Cabot, Saline County, Hot Springs and Monticello — by almost 1,000 square feet. In that extra space, it will have a seating area with chairs and couches "for the local community to congregate and those traveling will have a comfortable place to stop."

Artwork by Maumelle painter Dennis McCann and a five-course dinner and wine pairings from executive chef Casey Copeland combine for the monthly Art & Wine Dinner, 7 p.m. Sunday at The Avenue, inside The Waters hotel, 340 Central Ave., Hot Springs. The meal opens with an "herbed croissant Danish with brie and savory apple" and ends with "chocolate cake with blackberry mousse and vanilla bean ganache." In between: a smoked meatball and roasted pork belly. Cost is $80 per person. Call (501) 625-3850 or visit theavenuehs.com. The exhibition will remain on display in the restaurant through August.

And Austin-based taco chain Torchy's Tacos opens its first Arkansas restaurant Aug. 7 in Fayetteville — to be specific, 1541 Martin Luther King Jr. Blvd., near the University of Arkansas. A grand opening party 5-8 p.m. Aug. 5 will feature free tacos, the chain's green chile queso, beverages and giveaways. Aug. 7 opening-day customers can enter a raffle for free tacos for a year. Hours are 10 a.m.-10 p.m. Monday-Thursday, 8 a.m.-11 p.m. Friday-Saturday, 8 a.m.-10 p.m. Sunday. The Fayetteville restaurant will be Torchy's Tacos' 65th location in the United States — the rest are in Texas, Colorado and Oklahoma — but the first to serve weekend brunch, 8 a.m.-2 p.m. Friday-Sunday. The phone number is (479) 502-9143; check out the menu and other information at torchystacos.com. Oh, and a Rogers location, at 5000 W. Pauline Whitaker Parkway, south of the Walmart Arkansas Music Pavilion, is on the slate for what the chain says is "late 2019"; the Northwest Arkansas Democrat-Gazette reported last month that should be by November.