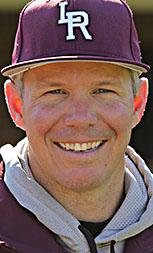 The University of Arkansas at Little Rock announced Wednesday it had agreed to a contract extension with baseball Coach Chris Curry through the 2023 season.

Curry recently finished his fifth season as the Trojans' coach, posting a 120-151 record. His teams have won 26 or more games in three of those seasons, including each of the past two, and UALR's 29 victories in 2019 were its most since the 2010 season.

"Coach Curry has done an outstanding job revitalizing our baseball program and taking our level of play to new heights," Athletic Director Chasse Conque said in a news release. "During his time, his ball clubs have given us memorable moments on the field and numerous accolades, including record success in the classroom."

Curry has led the Trojans to six victories over top-25 opponents, including three in 2019. UALR defeated ninth-ranked Arkansas 17-7 in Fayetteville, followed by 8-5 and 14-0 victories over 24th-ranked Coastal Carolina two weeks later at Gary Hogan Field.

The Trojans have qualified for the Sun Belt Conference tournament in each of the past four seasons, and under Curry, seven UALR players have been chosen in the Major League Baseball Draft.

"I'm grateful to Chasse Conque and Chancellor Andrew Rogerson for believing in what we're building here and their commitment to support our program long-term," Curry said in the news release. "The key to any successful organization is the caliber of people in it, and our coaches and players are the best. We're very excited to be here and continue building a championship program."