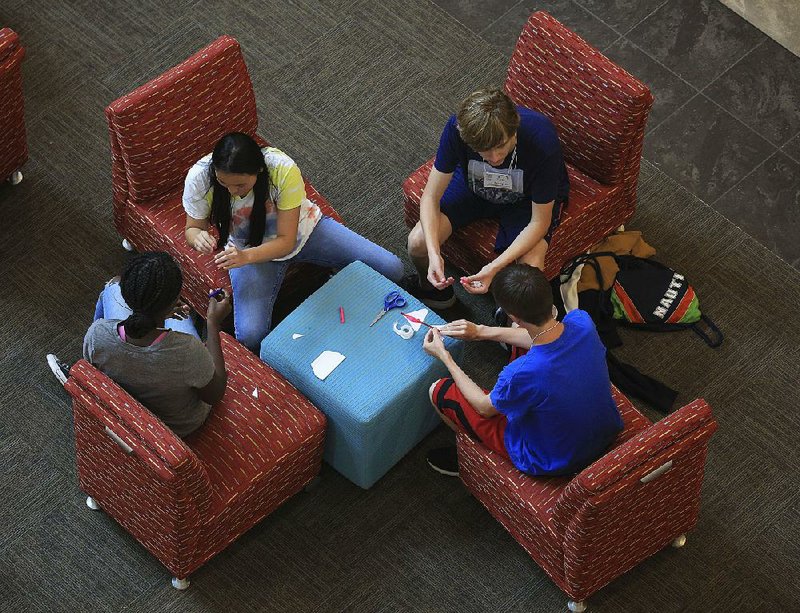 Pink flamingos, Barbie dolls, multicolored dried beans and vinegar are just some of the materials used this summer to prepare and excite high school students for the challenging Advanced Placement courses they will take when school starts next month.

A series of Super Saturday events featuring similar hands-on learning activities is planned for this fall in Helena-West Helena.

Advanced Placement courses, produced by the national College Board organization, enable students to cover college-level material while still in high school. The students can earn college credit for those challenging courses by scoring a 3 or higher on a 1-to-5 scale on year-end exams -- thereby reducing college tuition costs for the students and their families.

The goal of the Arkansas Advanced Initiative for Math and Science is to help as many students in member districts as possible achieve the 3-to-5 scores on the tests using the boot camps and teacher training. The initiative started a decade ago with a multimillion-dollar grant from the Exxon-Mobil foundation. The initiative is now funded with state aid and grants.

About 240 students have participated in the three summer boot camps meant to give students a head start in their coming classes. Almost 100 of those are participating this week in the 8:30 a.m. to 3 p.m., tuition-free boot camp courses in biology, chemistry, calculus and language arts at UALR.

[Video not showing up above? Click here to watch »https://www.youtube.com/watch?v=6u7fyHUmkWY]

One student activity was Barbie bungee jumping -- using calculations and rubber bands to give Barbie dolls the most thrilling jump possible from a door frame while still keeping the doll intact.

A language arts exercise -- similar to what could appear on an Advanced Placement test down the line -- called for analyzing or breaking down into all of its parts to determine its meaning a scholarly essay on 1950s American culture. The essay centered on the mid-20th century popularity of pink plastic flamingos.

Then there was the "Snack Cake Smack-down" that required the analysis of two brands of store-bought snack cakes.

"They have to create an argument with evidence about which product is better," said Susan Skinkle, director of English for the math and science initiative. "They take the boxes and really analyze the box information. They were smashing and feeling the cream to see which cream in the cakes was the creamiest. And they tested the taste and the appearance. It's the kind of analysis students do on a real AP exam test but that would be on a more serious subject. We teach the same skills but in a fun way."

Other activities at this week's boot camp included determining the sugar content in various carbonated soft drinks, using the chemical process of titration -- along with distilled water and sodium hydroxide -- to measure the acid in vinegar; and modifying acrylic straws with tape, index cards and modeling clay to create aerodynamic missiles able to hit distant small targets.

As for those multicolored beans that were scattered on the ground outside the campus's College of Business?

Students equipped with tweezers and plastic knives, forks, spoons and straws were instructed to use their tools to pick up as many beans -- units of energy -- as they could within two minutes. They then counted their beans to identify the most successful tool or pairing of tools to pick up the food source.

The tools were meant to mimic the beaks of birds and the mutations in the birds' beaks, with the best beaks generating the most success in finding food.

"I'm dying here," Junior Acosta, a student at Bauxite High, said as he struggled to use a knife to pick up beans to fill his plastic cup.

"Kids want to learn," said Lynn Harrison-Bullard, president of Arkansas Advanced Initiative for Math and Science, which has it headquarters at the Little Rock campus but serves member schools statewide. "We just present it in a way that they can master it, that they can handle it. They are on so many different levels, but the intellectual stimulation pulls them in. Then they figure out how to use that knowledge on their own."

Rhonda Riggin, program manager for the initiative's annual boot camps, said the curriculum for the camps is meant to give students something for their "tool belt" when they start their Advanced Placement course.

"When we came up with the curriculum for boot camp we thought about 'what we would like like kids to know the first day, what would we like them to know when they get to our class' -- just something in their tool belt," Riggin said.

One of the benefits of the boot camps for students is that teachers "are master teachers," and the best in their fields, Riggin said. Most are Advanced Placement exam readers, meaning they grade the Advanced Placement exams in the subjects in which they teach. They know the skills and knowledge that are needed for test success and can convey that to the boot camp students.

Darrin Gainer, a chemistry teacher at Greenbrier High School, is a five-year boot camp veteran teacher. The others are Kim Sanders from Booneville High, who taught the language arts course; Steve Matchell, who recently retired from Siloam Springs High, and Aimee Brinkley from Fort Smith Northside High, who both taught biology; and Brian Leonard from Lake Hamilton High, who taught the calculus class.

Gainer said he and his students who come from across central Arkansas do about four different chemistry lab experiments per day.

"I love working with these kids," Gainer said. "They are not having to be here like in regular school. They are coming on their own, so they are sponges. They love this stuff, and their enthusiasm rubs off on me."

Cade Smiley, who will be a junior at Conway High, is taking the chemistry class this week and will be taking four Advanced Placement courses, including chemistry, this school year.

"I've learned a lot and got some good refreshers," said Smiley about the boot camp. He wants to eventually go into a mathematics field, such as statistics.

Xamaria Collins, who will be a senior at Little Rock's Parkview Magnet High, is attending this week's boot camp for the second year in row. Last year she took the language arts class. This year she is taking the calculus class.

"I really enjoyed it last year," she said, "and I learned even more this second year."

She will be taking Advanced Placement courses in calculus, chemistry and literature this year.