City bans, then OKs recording at termination appeal for ex-officer 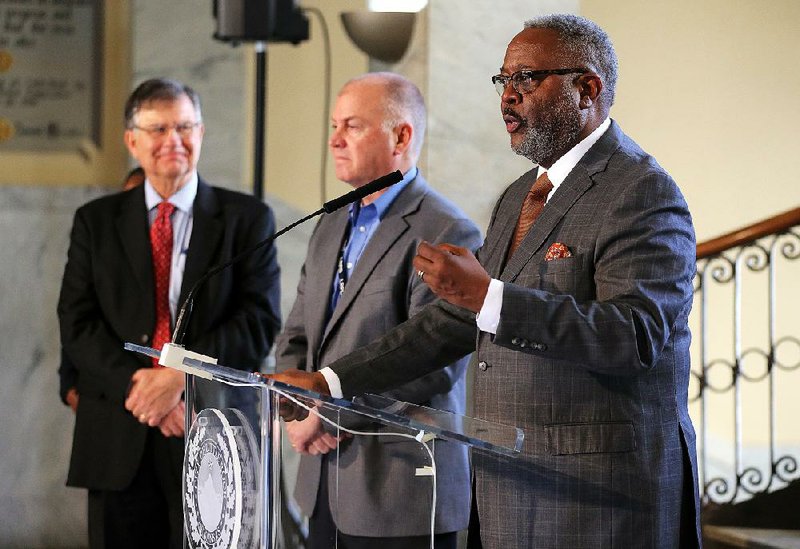 Little Rock officials, including City Attorney Tom Carpenter, fielded criticism about the recently adopted rule even before the start of an 8 a.m. termination appeal for former police officer Charles Starks, who was fired after a fatal on-duty shooting.

Shortly after the hearing began, the commission either blocked or ejected photographers and videographers from the hearing chamber, prompting at least one television station to prepare a lawsuit challenging the legality of the action.

Just before 3 p.m., Carpenter walked into the Starks hearing and, with little explanation, recommended the Civil Service Commission pull back its new regulation.

"We recommend at this juncture [that] the ban be withdrawn by the commission," Carpenter said.

Photo, video and audio recording devices were back at work within minutes in the city's crowded board meeting room.

Nick Genty, news director at KATV-TV, said his station's attorney had drafted an injunction to file in Pulaski County Circuit Court on Thursday afternoon that asked a judge to decide whether the commission's regulation was legal.

Genty spoke while waiting at City Hall for a final decision from the city attorney.

"This is a commission meeting, not a court of law. It's an open meeting. We should be able to document it," Genty said.

Genty planned not to file legal action if the city withdrew the rule.

Carpenter could not be reached for comment despite phone calls from the Arkansas Democrat-Gazette.

City spokesman Lamor Williams said the Civil Service Commission's new rule, adopted two days before the Starks hearing's start, was based on "Administrative Rule No. 6 of the Arkansas Supreme Court on the broadcasting of trials."

City officials had said earlier that the new rule was needed because undercover police officers might testify and be photographed, or that potential witnesses might see testimony from earlier witnesses. They said they adopted the rule under the premise that the commission was operating as a quasi-judicial body.

Steinbuch and others argued that the city's quasi-judicial claim "didn't apply. The Civil Service Commission is part of the city's executive branch and is wholly subject to the state FOIA," he said.

At the start of Thursday's hearing, attorneys for Starks and the city objected to the presence of recording devices and, under the new regulation, the commission ordered them removed.

At least five camera and recording crews were ejected or not permitted to enter the crowded meeting.

As Starks' appeal hearing continued into afternoon, the city "was on notice that various television stations were about to seek an injunction as to whether the rule violated FOIA," Williams said in a statement.

Carpenter recommended to the Civil Service Commission "that the rule be set aside" and said "that the city would not defend it at this time," according to Williams' statement.

Representatives of the Arkansas Press Association also spoke to city officials about their concerns about the anti-recording device rule and whether it violated the state's open meetings laws. They weren't sure Thursday whether the city would reconsider the regulation in the future.

But Williams said late Thursday that the commission's new rule to ban recording equipment "is dead."

Steinbuch and other public-meeting activists also raised questions on Thursday about another potential violation of the state Freedom of Information Act at Little Rock City Hall.

The city's security system, Lobbyguard, required everyone entering the building, including those attending the Starks hearing, to present identification, sign in and be photographed. Each attendee was given a sticker badge.

The Freedom of Information Act textbook Steinbuch co-wrote quotes attorney general opinions saying that anyone wishing to attend a public meeting "may not be compelled to verbally identify himself or to produce identification as a condition of attendance."

"Nor may persons attending be photographed or required to sign in for identification purposes."

Williams said late Thursday that he wasn't aware of complaints about the sign-in process and that the city would have to research the law regarding it.

When Little Rock adopted the visitor check-in system two years ago, a June 2017 Arkansas Democrat-Gazette article said the "security staff has been instructed to halt the badge system prior to the [city] board meetings since many visitors will be entering at the same time."