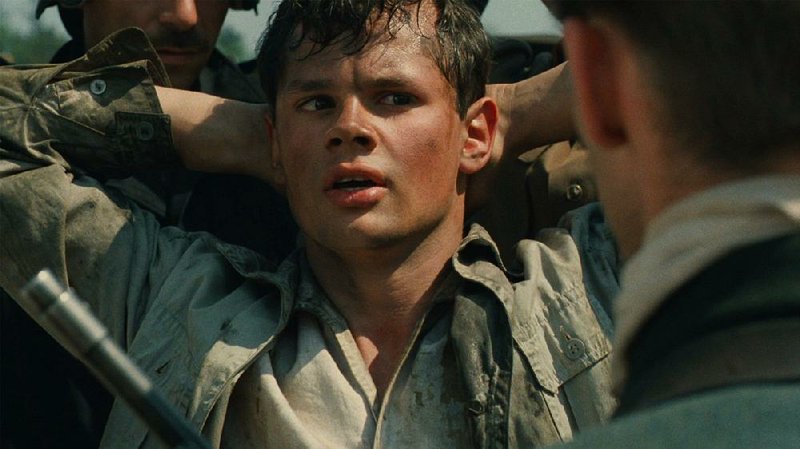 In 1991, I had the second worst date of my life (I don't want to talk about the worst): A young woman and I met to see Europa Europa at Little Rock's now defunct Market Street Cinema. She identified herself with a name that wasn't her own and painfully grabbed my arm when I slurped my Diet Coke too loudly. Worse, she abruptly left the movie when there was still a half hour to go.

Oh, did I mention she moonlighted as a clown for children's parties? No, her name wasn't Pennywise. (I don't want to talk about the worst date.)

My nephew later teased me about her being "the one," but what has stayed with me from that encounter was the movie itself. If I've approached my comments about the film from a personal angle, it's because the movie affected me in a unique way. Needless to say, I was overjoyed when I found out the Criterion Collection has released a new Blu-ray edition of the film. It comes with a thoughtful video essay from Annette Insdorf and a gorgeous 2K transfer.

For those who haven't seen it before, Europa Europa is based on the true story of how a German Jewish teenager named Solomon "Sally" Perel (Marco Hofschneider) survived the Holocaust. In a twist of fate that makes a typical episode of The Twilight Zone seem mundane, Perel fled Germany and Poland for the Soviet Union. When Nazi soldiers captured him, he told them he was an ethnic German and wound up attending an elite Hitler Youth school.

Perel maintained the deception until the end of World War II and now lives in Tel Aviv.

Europa Europa still startles me 30 years later because it was the first movie from the Good War, other than Das Boot, I had seen where the Germans were not monolithic monsters. Pretending to be Josef Peters, Perel discovers Nazis who are kind and generous but whose love would turn to homicidal animosity if they discovered his identity. Their conditional affection is as scary as the atrocities they would also commit.

If you wonder why the movie affected me the way it did, you might have a clue from my anglicized surname.

Several of my ancestors emigrated to America to escape religious prejudice. I took comfort in the fact that I was descended from Germans who didn't have the blood of innocents on their hands. My Dunkard forbearers never even went to war. Unlike the Amish, my practicing relatives drive cars and have refrigerators, but they can't watch movies with me.

Europa Europa ended my complacency, and I'm eternally grateful. The Germans in that movie help explain why human beings still kill each other needlessly.

Since the mid-'90s, I've been corresponding with the film's Polish writer-director Agnieszka Holland. When I recently asked her how she came up with the film's unique conception of the Third Reich, she replied though FaceTime in France, "It's not that Germans are bad because they are German. It's circumstances, the weakness of the people, the need to feel some kind of hope beyond reason to believe that you are stronger and better than other people at things. There are a lot of circumstances that make people open and susceptible to this kind of behavior. It's not only Germans.

"We've seen seen recently in Rwanda with Tutsis and Hutus. We can see also many other situations with wars and hate and ideology, which demeans people and let them believe they have the right to take the freedom and the life of others. It's not especially Germans. The people have inside of themselves two poles, which in normal circumstances, are not very visible. There are extreme generosity and courage and extreme hate and evil."

Much of the discomfort of watching Europa Europa comes from the fact that many of the Germans whom Perel deals with are so blinded by their ideology that they ignore glaringly obvious facts. One Nazi party official tells Perel that the drubbing the Third Reich is receiving from Soviet troops is merely a prelude to German victory. In class, Perel's teachers demonstrate how to spot a Jew, oblivious to his own presence. As a result, the absurdity in Europa Europa sometimes leads to high, if unsettling, comedy.

"I felt that it needed this lighter tone to make [the] journey more personal, somehow. When you are laughing at something, you feel you are part of something. It breaks down the distance," Holland explains.

"It was a very interesting and paradoxical story. I saw also the elements of the grotesque and humorous. When I [was] approaching the writing of the script, I was looking for the right form. It has to be the philosophical tale of the 18th century like Candide by Voltaire, for example. I've been writing it in this direction. It's deeply tragic, but it has the elements of paradox and the grotesque."

The movie depicts Perel almost falling for the toxic vision of Nazism, but Perel's own body prevented him from embracing the ideology that had duped his classmates and their parents. Because of one small but undeniable difference, Perel in the movie and in real life constantly worried about inadvertently giving himself away.

"It's terrible how people are able to believe the bulls*** only because they believe it makes them gods," she says. "Solomon Perel ... was very close to believing it ... . He wanted to be one of them. He really felt this kind of emotion based on very fake ideology."

One factor that might have helped make Perel's story easier to follow was Holland's choice of whom to portray him. German actor Hofschneider landed the role even though his older brother Rene was considered for it. Both brothers play siblings in the movie.

"He was a teenager himself. He was in the last class of his high school. He was very young, which made this character more touching and believable," Holland recalls. "(Perel) was a very lonely teenager who went through very difficult experiences and choices, and he needed to belong. It is somehow the story of someone who cannot belong and at the same time is belonging and has this inner fight with his identity."

Having a film in the Criterion Collection is a badge of honor for any filmmaker. The extras include recollections by Holland and Hofschneider and a moving recent interview with Perel, himself, who is 94. The company specializes in classic and arthouse movies, but Holland's unconventional narrative, and her chameleonic hero debuted to a mixed reception when Europa Europa opened in Germany nearly 30 years ago.

As expected, director Leni Riefenstahl, who made Nazi propaganda film Triumph of the Will, condemned it, but so did other Germans who found the movie anti-Semitic despite the fact that one of the film's producers Artur Brauner, who died on July 7 at 100, was a Jew and that Holland is a daughter of a Jew who lost his entire family in the Holocaust.

"Only some Germans didn't like it. I don't know why they found it anti-Semitic, but all the Jews I met -- and I met thousands and thousands of people because we did screenings with Q&A all over the world, they loved it. It's still one of the favorite films of the type," she says.

The German Export Film Union refused to submit Europa Europa as a nominee for Best Foreign Language Film for the Academy Awards, which resulted in an angry open letter from German filmmakers like Das Boot and In the Line of Fire director Wolfgang Petersen who thought Holland's movie was worthy of consideration. Holland ended up receiving an Oscar nomination for her script.

Needless to say, the controversy attracted curious cinephiles like me and my unfortunate date to Europa Europa and the woman who made it. She has had a long career directing American television shows like The Wire, Tremeand House of Cards. She also helmed the 1993 adaptation of The Secret Garden and has two more films scheduled to open soon. Mr. Jones is a bio-pic of Welsh journalist Gareth Jones, who revealed how Ukraine starved under Stalin's agricultural policies, while Charlatan is a Czech language film that she's editing.

When asked if the initial rejection might have helped her, Holland carefully answers, "I don't know. The movie woke up in people some curiosity about the subject and the period and who I am and why I told the story in this way. It's better to have a movie that asks questions and not one that just nicely tells a story have people have heard already."