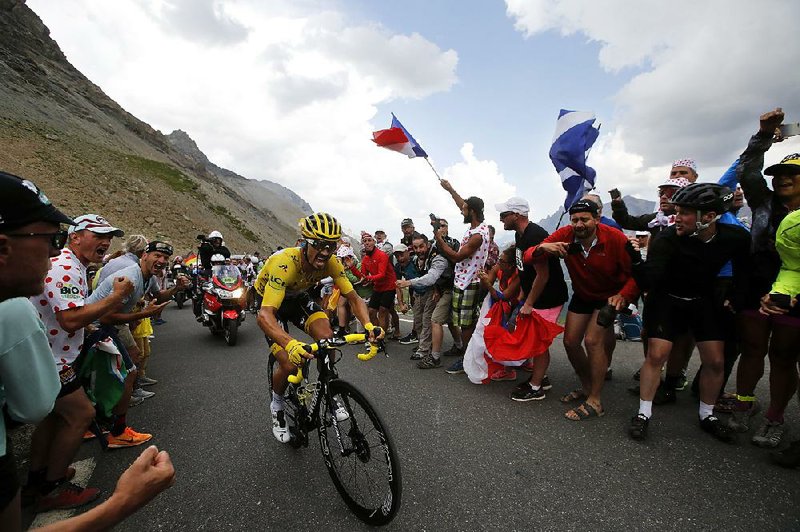 France’s Julian Alaphilippe, the overall leader of the Tour de France, climbs the Galiber pass during Wednesday’s 18th stage as cheering fans crowd the roadway. Alaphilippe made daring run over the 11-mile descent after the climb to maintain his lead.

SAINT-MICHEL-DE-MAURIENNE, France -- With the Alps spread like giant teeth in front of him and rivals speeding away, seeking to steal the precious yellow jersey from his shoulders, Julian Alaphilippe switched off the part of the brain that stops normal people from taking death-defying risks.

The French rider is no normal person.

And downward he plunged, flying through hairpin bends on tires barely wider than his thumb. The lunar-like landscape of giant slopes of barren scree became a blur as he hit top speeds of around 55 mph.

"It was a day of folly," Alaphilippe said.

"I unplugged my brain and I was on the limit on each bend," he said. "I did a crazy descent, where I took risks. I wanted to save my jersey."

With one big Alpine stage completed and just two more to go, Alaphilippe is still in yellow and one step closer to delivering a first Tour de France title since 1985 to his country, crossing fingers, toes and everything else that he makes it through the mountains to Paris on Sunday still in the lead.

"We're all dreaming of that. Even I'm starting to imagine it," he said.

Continuing to contribute more than anyone to making this the most exciting Tour in decades, the French rider recovered from a mini-wilt on a lung-burning ascent to 8,668 feet above sea level on the Galibier pass and then rode like a fury downhill on the other side as if his jersey depended on it.

With a decisive, well-placed attack on the slopes of the Galibier -- the last of three climbs to above 6,500 feet on Stage 18 -- Colombian rider Egan Bernal got away from Alaphilippe and ate into his lead.

A slow descent or, worse, a fall from Alaphilippe on the treacherous bends could have seen Bernal do even greater damage to his lead or perhaps erase it entirely.

But Alaphilippe is like a dog with a bone when it comes to that iconic shirt. He has now worn it for 13 stages at this Tour, the most by any French rider at a single edition since Bernard Hinault held it for 17 days in winning the race for a fifth time in 1985.

The upside for rivals trying to wrench it from his jaws is that the last two Alpine stages to the ski stations of Tignes and Val Thorens both finish with punishing ascents, meaning there'll be no downhill for Alaphilippe to recover on, as he did Thursday, if he again cracks going uphill.

Bernal and others are banking on it.

Bernal's reward for speeding away from Alaphilippe on the grind to the top of the Galibier was a jump from fifth to second in the overall standings. Having started the day 2 minutes, 2 seconds behind Alaphilippe, Bernal is now just 90 seconds behind him, breathing down his neck and making an already thrilling Tour only more uncertain in its outcome after more than 1,850 miles of racing through Belgium and France.

"It's very good for the morale. But Julian demonstrated once again that he is very strong," Bernal said. "Everything is possible. I'm in the mix but to win the Tour is difficult."

Bernal's Ineos teammate, defending champion Geraint Thomas, tried to make it a one-two punch on the Galibier by also attacking on the last hairpins leading to the top, lined by thick, cheering crowds.

But Thomas couldn't make his offensive stick. Alaphilippe caught him again on the downhill to the finish. Thomas is still 1:35 behind Alaphilippe, as he was at the start of Stage 18, but slipped back to third overall behind Bernal.

"We wanted it to be hard but the pace wasn't there," he said. "The call was made for Egan to go and hopefully that would kick it off a bit, but it didn't. That's when I went as well, just to test. But at least Egan gained some time on everyone else."

Colombian rider Nairo Quintana won his first stage of this Tour, and third of his career, flying away from everyone on the Galibier and putting some color back into what so far had been an underwhelming Tour for the former two-time runner-up. Quintana vaulted from 12th overall to seventh, now 3:54 behind Alaphilippe.

With Quintana and Spanish riders Mikel Landa and Alejandro Valverde, Movistar now has three riders in the top 10, a possible launching pad for the team to launch more offensives.

"If we find a favorable ground over the next two days, we will keep attacking," Quintana said.

With attacking opportunities running out for rivals, Alaphilippe knew he'd be in for a torrid time.

"It was a big mouthful," Alaphilippe said. "I had imagined the worst."

But he continues to confound even his own expectations.

Although his lead has shrunk, with the duo of Bernal and Thomas applying pressure from both sides, Alaphilippe continues to make converts to what is now a legion of hopeful believers with each step closer to the Champs-Elysees.

"No matter where I finish in Paris, this Tour will have left a mark on French people," he said. "And I'll have learned a lot about myself."