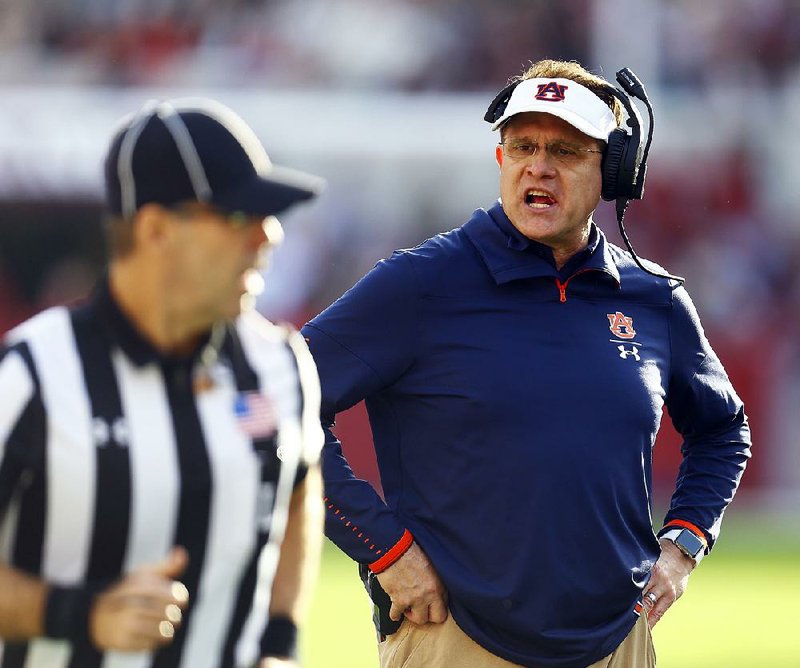 Auburn Coach Gus Malzahn said he is expected to produce better results with the Tigers than last season’s 8-5 record, despite winning two SEC West titles and playing for the national title in 2013. “I’ve got a job that expects to win championships, and I expect to win championships,” he said.

HOOVER, Ala. -- Auburn's Gus Malzahn is the only active SEC coach to beat Alabama's Nick Saban, and he's done it twice in six tries.

Malzahn also has led the Tigers to two SEC West titles and the conference's overall championship in 2013, when Florida State edged Auburn 34-31 for the national title.

SEC TITLE SCENARIO Malzahn is on the hottest seat in the SEC, but the Tigers have the talent and experience up front on the defensive and offensive lines to be title contenders. The key will be whether a play-making quarterback — freshmen Joey Gatewood and Bo Nix are competing for the starting job — emerges to lead the offense.

The Tigers have played in six consecutive bowls under Malzahn, including a 63-14 pounding of Purdue in the Music City Bowl last season.

Yet Malzahn seemingly again will go into this season coaching for his job at Auburn after last season's 8-5 mark that gave him a 53-27 record with the Tigers.

Malzahn survived and led Auburn to a 10-4 record in 2017, including back-to-back victories over Georgia and Alabama that earned him a contract extension to seven years and $49 million amid speculation the University of Arkansas was pursuing him for its coaching vacancy.

Steven Leath, who as Auburn's president rewarded Malzahn with that contract, resigned under pressure June 21. That move increased speculation about Malzahn's job security.

But Malzahn, who grew up in Fort Smith and won Arkansas state championships as a high school coach at Shiloh Christian and Springdale, spoke confidently about his team at SEC media days last week.

"In the years that we win championships, it's good. The years we don't, it's hot seat this, hot seat that. I think out of the six years, four had been this same rodeo. It's just part of the job description."

Malzahn, the University of Arkansas' offensive coordinator in 2006 when the Razorbacks won the SEC West and Arkansas State University's coach in 2012 when the Red Wolves won the Sun Belt Conference title, said pressure goes along with being Auburn's coach.

"Some places eight wins, they celebrate. That's just not part of Auburn," he said. "We expect to win championships and we've done that. We're going to have more championships in the future here, too."

Auburn was picked to finish fourth in the West -- behind Alabama, LSU and Texas A&M -- in voting by reporters at SEC media days, but Malzahn said the Tigers are championship contenders.

"When I look at the team that we have this year, there's some of the same characteristics that those championship teams had, and that's what's exciting for me," Malzahn said. "Now, you've got to win close games. You've got to make plays when the games are on. You've got to stay healthy.

"But we've got a chance. Not every team in the league can say that."

Auburn has 11 seniors projected to start, and Malzahn said eight could have left after last season for the NFL.

"I really think that's where the core heartbeat of our team is, with those guys," Malzahn said. "They're very hungry. I feel like they've got something to prove."

Malzahn said Brown's decision helped persuade others who considered leaving early for the NFL to return.

"After the bowl game, talking it over, we decided, 'Let's go back and do it the right way,' " Brown said. "Last year we had a mediocre season. That's not how we do things.

"My main motivation was for us to do something special. Being able to compete for championships, that's why you play college football."

Wanogho said he was raised to finish what he started.

"The NFL is going to be there next year," Wanogho said. "So I want to enjoy this season at Auburn with my brothers one last time."

"I believe we have a chance to be the best defense that we've had at least in the 10 years I've been at Auburn," Malzahn said. "That's a really good feeling.

"We really feel like we have a chance to be dominant on the defensive line."

The Tigers lost four seniors at linebacker, but Brown said there won't be a drop-off by a group of new starters led by juniors K.J. Britt and Chandler Wooten.

"We have young linebackers, but don't be fooled," Brown said. "Those guys have been there in the system. I expect them to be able to compete. We shouldn't see any difference in play."

Auburn returns all five starters from an offensive line that took its share of criticism when the Tigers averaged 389.9 yards per game to rank 11th in the SEC.

"They went through some growing pains last season," Malzahn said. "They got beat up. They've kind of got an edge about them."

Malzahn said the offensive line played well late and carried that over to spring practice.

"In the spring, they held their own against our defensive line," Malzahn said. "They're a confident group."

"You can tell it's going to be crazy between those two," Wanogho said. "They're coming out every day competing. You can tell they're hungry for it.

"They're both pretty fast and can sling the ball."

Will Hastings, a senior from Little Rock who redshirted last season with a knee injury, should be among the Tigers' top receivers, and Auburn returns its leading rushers from last season in JaTarvious Whitlow (787 yards) and Kam Martin (458).

Auburn opens the season against Oregon -- one of the favorites to win the Pac-12 title -- in Arlington, Texas. The Tigers also have to play Georgia and Florida -- picked 1-2 in the SEC East -- along with their West rivals.

"Our schedule once again is one of the toughest in college football," Malzahn said. "It's not a shock to our system. I really believe we're used to it."

The rugged schedule is another reason for the speculation about whether Auburn will win enough games for Malzahn to return for an eighth season.

"We try not to concern ourselves with that, because at the end of the day, this is the SEC and people are going to say whatever they want," Wanogho said. "At the same time, I love Coach Malzahn. That's my coach."