University of Arkansas students are shown on the lawn in front of Old Main on the campus in Fayetteville in this file photo.

The average net price is an estimate of the true cost of attendance, factoring in expenses like housing and common types of grant aid. It's calculated for students awarded grant or scholarship aid from government sources or the school they're attending. The net cost price is for the entire academic year.

For UA-Fayetteville, the state's largest university, the dip in average net price was the first decrease since 2009-10, according to the National Center for Education Statistics. The recent dip came in a year when the university's tuition increased, underscoring a point made by experts that a wide variety of costs and the amount of available grant aid affects affordability.

"The net price is an important indicator," said Jennifer Glynn, director of research and evaluation at the Jack Kent Cooke Foundation, which offers scholarships while advocating for increased college access and affordability.

Glynn cautioned about reading too much into year-to-year changes, however, stating that several years of data are needed to determine any trends.

Glynn said the measure also has other limitations.

"These are averages, so it's not telling a story for all students," Glynn said. Schools also sometimes do a poor job of estimating living costs, Glynn said.

"Over the last three years, we have been shifting the bulk of our scholarship dollars in state to students in Arkansas, including those with financial need, focusing some of these funds on those who may not qualify for other types of assistance," McCray said.

Roughly half of UA's freshman class comes from outside Arkansas, but the average net price calculation for public colleges factors in students paying only in-state tuition rates.

CollegeNavigator.gov also lists a similar estimate of true costs for students based on their incomes. The average net price by income is calculated for students receiving any kind of what's known as federal Title IV aid, which includes certain loans and work study funds, in addition to federal grants.

"It is incredibly helpful that we are starting to split out the net price by income level," Glynn said.

Students and families in the lowest income tier, reporting earnings of $30,000 or less, pay less than students in other income tiers, according to the data. Out of the six largest public universities in Arkansas, the lowest net price for this income group was $9,102 at UA-Fort Smith, while the highest net price was $13,176 at UCA.

At UCA, "we had more students in the lowest income bracket in 2017-18 than in 2016-17, but these students collectively received fewer dollars from state programs in 2017-18," Amanda Hoelzeman, the school's director of media relations, said in an email.

Hoelzeman said many students receive private, need-based scholarships, which are not reflected in the average net price calculation.

"Making college affordable for all students, including those from the lowest income bracket, is absolutely a goal of UCA," Hoelzeman said, adding that there has been a "steady increase" in fundraising for scholarships.

Glynn said more must be done to make college affordable in the long-run.

"It's terrific that institutions are fundraising more," Glynn said. "But the flip side is to say costs cannot keep rising as fast as they are rising."

In answering a question from the Democrat-Gazette, Sam Strasner, a spokesman for Arkansas Tech, said the university faces challenges to keep its net price steady, including from state policies.

"Given the obstacles the institution faces, maintaining this relatively flat level of average net price increase would be unrealistic," Strasner said in an email.

He said state requirements "to minimum wage, career service and the classified pay plan" resulted in what Arkansas Tech calculates as about $536,000 in "unfunded mandates" for the current fiscal year.

Strasner also cited the "continued rising cost of health insurance" and the share of state funding the Russellville university received.

"Arkansas Tech University works diligently to maintain high quality and remain an affordable choice for its student body, more than 93% of whom are Arkansans, while receiving considerably less state funding than comparably sized institutions," Strasner said.

Public universities in Arkansas held the line on tuition increases for the 2018-19 school year following a request by Gov. Asa Hutchinson, with governing boards for the schools approving the flat rates. Boards then approved tuition rate increases for most universities the 2019-20 academic year, with only UALR holding tuition steady in 2019-20.

Tracy Courage, news director for UALR, said the university lowered its average net price -- it went down by $148, or 1.1%, in 2017-18 -- in part because students received more scholarship and grant aid.

Asked about average net price holding close to steady, Courage said in an email: "As to whether this level can be maintained, I'm not sure. There's a lot of factors that come into play." 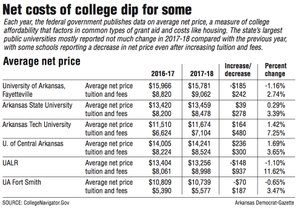 Net costs of college dip for some