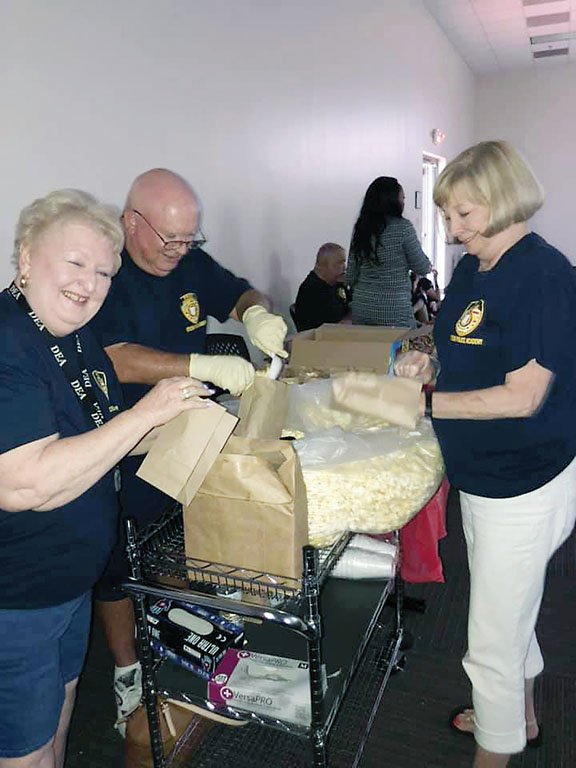 JACKSONVILLE — When Jacksonville Police Chief John Franklin started in the position in June 2018, he met with LaConda Watson, CEO of the Boys & Girls Club of Jacksonville, to discuss ways to engage the community and its children. That series of discussions led to Family Movie Night.

“When Chief Franklin first came on board, he and I sat down and talked about some of the issues and concerns we had in Jacksonville and tried to bring some fun entertainment to the community,” Watson said. “We wanted things that families can be engaged with and be a part of with their kids.”

Watson said that six months ago, it was decided to have a Family Movie Night. The first one was July 19 with the showing of Night at the Museum.

“The Police Department had just recently bought another popcorn machine,” Watson said. “[Franklin] was excited about wanting to do a family and community engagement. This was just a way to have some positive community work done. The chief has been extremely supportive of the Boys & Girls Club. His first day on the job, he came to the club and spoke to the kids. He has been phenomenal since then.”

Franklin said the Family Movie Night is a good deal because it’s in a safe, neutral environment.

“It’s great for families to just be together and enjoy wholesome family entertainment in an air-conditioned environment,” he said. “You can get out of the heat.”

No outside food or drink is allowed at the event. However, the Jacksonville Police Department, along with the Citizens Police Academy, provides popcorn, snacks, lemonade and soft drinks.

“We wanted to do that and step up with the Boys & Girls Club and provide that for our city’s children,” Franklin said. “They deserve the best we can give them.”

Franklin said the movie is a good way to get children off the streets.

“Unfortunately, when schools let out, that is statistically when crime goes up, with more young people as victims and offenders,” he said.

The first movie night had about 45 people in attendance, Franklin said.

“It was a little smaller turnout that what I had hoped for,” he said. “I’m hoping we get more people out for the second one. We’re just glad to be able to do that, be a part of the community and have positive connections with the community and offer some wholesome entertainment that everybody can enjoy.”

Families are encouraged to bring sleeping bags, pillows or blankets to relax while watching the movie, Watson said. Parents and guardians must accompany their children. No drop-offs will be allowed.

“It is something that we want to continue down the road, to provide to the community and to get involved with engaging the kids,” Watson said. “We’re just doing something fun, not at the expense of the families.”