Diamond City, population 782, has been a hotbed of political discord for decades.

In 1994, Police Chief Diana Blythe handcuffed Alderman Frank Carr to a door to prevent him from leaving a City Council meeting and quashing the quorum. Blythe said Carr, 69, stabbed her in the stomach with a pen as they scuffled.

Last year, Mayor Jan Hudson resigned after being charged with the theft of $4,550 from the Diamond City Community Center.

On July 22, current Mayor Linda Miracle sued most of the City Council for having a meeting without her and taking a number of actions in her absence.

Troy Burleson of Lead Hill, a former Diamond City mayor, said the council mutinied on July 9 because the mayor had missed several meetings and “the city was grinding to a halt.”

Diamond City is about 3 miles south of the Missouri state line on a peninsula that juts into Bull Shoals Lake. Diamond City was incorporated in 1960, eight years after Bull Shoals Dam was finished, making the lake a budding tourist destination. Burleson said many of Diamond City’s residents are retirees from “big cities up north.”

Diamond City is best known for its many fishing spots, according to the Central Arkansas Library System Encyclopedia of Arkansas.

“Several lakeside resorts draw tourists to the city, and the population is said to swell significantly during fishing season,” according to the encyclopedia entry.

But the beautiful scenery masks a tumultuous political history. Council members come and go, as if through a revolving door.

“There are a lot of good citizens in Diamond City,” Burleson said. “Diamond City is an awesome place. But the government just cannot function.”

Hudson, the previous mayor, was charged with one count of theft of property on May 18, 2018, and resigned from her position as mayor the next month, according to Arkansas Legislative Audit. Her trial is scheduled to begin Sept. 30, according to Boone County Circuit Court records.

“This is not uncommon because a lot of it is family-oriented,” he said. “It’s not like a feud. But one family and their friends will get power for a while and they will get even for what they think are wrongs and injustices. Then the other family will get in power, and the pendulum will swing. … I think it’s related to what they perceive as past slights or harms.”

According to the lawsuit filed last week in Boone County Circuit Court, the council didn’t have a legal quorum when it took several actions at the July 9 meeting, when Miracle and two council members were absent.

The three council members in attendance — Greg Wilson, Charlie Grimes and Cristy Olcott — voted to make city recorder Tina Jackson the acting mayor, according to the lawsuit. That established a quorum even though Jackson didn’t vote on any issues that night, Olcott said.

The council then voted to make several changes, including approving Victoria French as a new council member, appointing Keisha Bell as treasurer and overriding three of Miracle’s vetoes of proposed ordinances, according to the lawsuit.

“As there was not a lawful quorum established, all actions approved during the July 9, 2019, meeting should be stricken from the city records, set aside and held for naught,” according to the lawsuit filed by Samuel Pasthing, a Flippin lawyer representing Miracle.

Olcott said she and the other two members who attended last Tuesday’s council meeting — French and Grimes — were served with summonses at the meeting.

Olcott, who has been on the council since Jan. 1, said the defendants have yet to hire a lawyer.

She said Miracle has missed the past three meetings and canceled four meetings in April. Two council members — Don Bennett and Cheryl Guthrie — are usually absent from meetings when Miracle is.

Bennett said he didn’t want to discuss the matter.

“The lawsuit has been filed,” he said. “Let’s let that play out.”

Olcott said she didn’t know what causes all the bad blood in such a beautiful place. But she said thin skin could be a factor.

“You’re supposed to be able to go up and talk and be able to hash out the issues of the city,” she said. “But people take it as anger and turn it into personal vendettas. You can’t take it personally. You have to do what’s best for the city and then move forward.”

Sharlene Blair, who was named deputy recorder in the July 9 meeting, has been circulating a petition to call for a public vote to remove the mayor from office. Blair said she almost has the 100 or so signatures she needs.

“We’ve had our share of problems over the last few years,” said Blair. “I don’t know why.”

Blair, who is named as a defendant in Miracle’s lawsuit, said she tried to work with the mayor but that the last straw came when Miracle closed the community center, which provided free meals to veterans two days a week.

“She has padlocked the kitchen so they cannot do the meals,” Blair said.

Beyond that, Blair said, the mayor doesn’t follow city ordinances, the city budget or the direction of the council. Miracle refuses to respond to requests under the Arkansas Freedom of Information Act, Blair said.

“The mayor has caused so much chaos that there’s nothing getting done,” she said. “That’s sad for the city. Diamond City is a great little town. It’s got some of the most wonderful people you’ll ever meet. Why we get the bad apple in the city government is beyond me. There’s not a better place to live than Diamond City. But it is right now a mess.”

Council members other than Olcott and Bennett didn’t return messages left for them Friday.

As for Carr, the alderman said he didn’t stab anybody with his ballpoint pen, which remained in his pocket during his altercation with the police chief, according to a Dec. 7, 1994, article in the Arkansas Democrat-Gazette.

Carr was charged with resisting arrest and criminal mischief over his scuffle with Blythe during his attempt to exit the council meeting.

He pleaded innocent. Both charges against him were ultimately dismissed the next year, according to Boone County Circuit Court records.

“This is not uncommon because a lot of it is family-oriented. It’s not like a feud. But one family and their friends will get power for a while and they will get even for what they think are wrongs and injustices. Then the other family will get in power, and the pendulum will swing.” 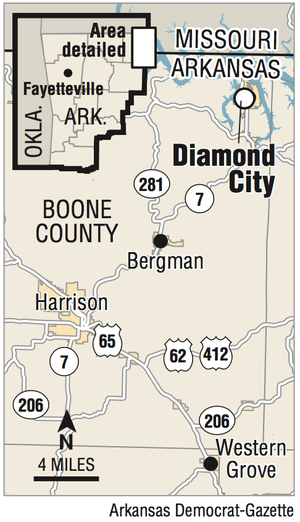