WATCH YOUR LANGUAGE! Shall you, or will you be correct? 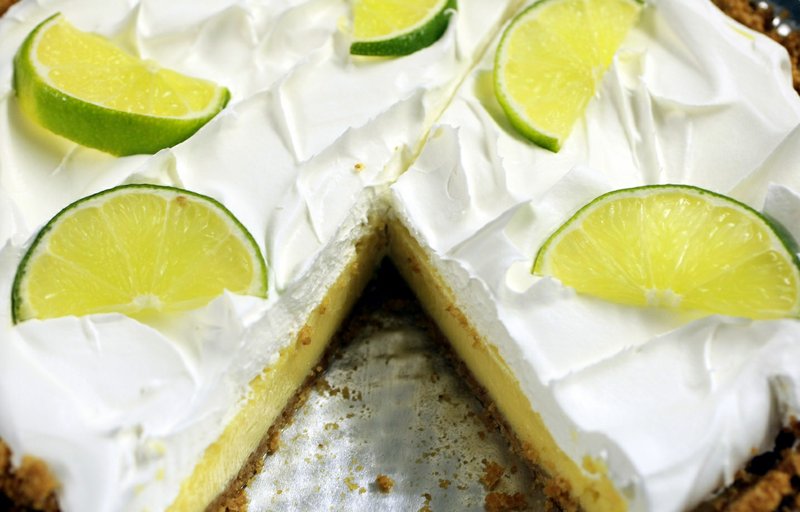 I shall eat the last piece of Key lime pie. (Democrat-Gazette file photo)

My mother, who often corrected our grammar, would use the word "shall." At the time, I thought she learned it from all those prayers in church.

Looking back, I realized that didn't make a lot of sense. She didn't use other older-sounding words with us.

Hast thou done thy homework yet?

I told thee to come home right after school.

Methinks you are feeding your vegetables to the dog.

So what was with the "shall"?

Merriam-Webster offers a "simple definition" of shall. Naturally, it's not simple at all.

M-W lists three uses for "shall."

■ You use it to say that something is expected to happen.

I shall eat the last piece of Key lime pie before Roger does.

■ You use it to ask another person's opinion.

Shall we order two desserts or three?

■ You use it when you're commanding someone to do something or forbidding something.

You shall not leave without trying the chocolate mousse.

Now, there's this. Some grammarians say that you use "shall" to express the future in only the first person (I shall, we shall). But you use "will" for second person (you will) and third person (he, she and it will). Then, if you're showing decisiveness, those are reversed (I will, you shall). That's not confusing at all.

After all that, I shall tell you that many word people say that in American English, "shall" is all but ancient history. It's used in British English but is becoming less common in Britain, too. In the United States, "will" is more often the choice.

Usage notes in the Merriam-Webster and the American Heritage dictionaries say that the rules are complex and have meandered all over the place for centuries. Many words have been written on the topic without clearing up the confusion. People either ignore the rules or follow them with wide inconsistency.

The American Heritage Dictionary says that people who use "shall" might sound a bit stuffy, but known phrases sound OK. The protest song "We Shall Overcome" wouldn't have the same effect as "We Will Overcome." Perhaps "shall" inspires activism. These lines from Lincoln's Gettysburg Address also show determination:

"We here highly resolve that these dead shall not have died in vain, that this nation, under God, shall have a new birth of freedom, and that government of the people, by the people, for the people, shall not perish from the Earth."

"Shall'' is also used in legal documents.

Residents shall not roast s'mores in apartments.

From the U.S. Constitution: "No religious test shall ever be required as a qualification to any office or public trust under the United States."

Bryan A. Garner, lawyer and writer of copious books on words, has recommended that "shall" be banned from legal documents because it creates ambiguity. He writes that "shall" means "has a duty to" do something. But in the negative, things get confusing. If a document says, "No person shall enter," Garner says, "We're negating a command to do something: You're not required to do it (but, by implication, you may if you like)." Garner instead recommends, "must," "will" or "may not."

A recent teaser to a TV show had a big cheese telling us, "Expect to be a little surprised." If a person can expect to be surprised, is that really a surprise? I don't think so.

I always laugh when a person says, "I was beside myself." Of course I use a poker face if something tragic has occurred. A person can also be beside herself with joy. It makes me wonder whether the person is in an armchair, because that person would be somewhat shoehorned.

The idiom means you are so bursting with emotions that you lack control. The ancient Greeks believed that when a person's emotions were extreme, either from glee or devastation, the soul took a little breather outside the body and stood beside it. Like most idioms, it's not literal unless you are magical.

A friend told me she had seen "collared greens" written on a menu. Her first question was, "Do greens need tailors?"

"Collard" was spelled correctly elsewhere on the menu. I will ask her to check next time how the salad is dressed.

Sources not already mentioned: Talk Like Shakespeare, The Careful Writer by Theodore M. Bernstein, Quick and Dirty Tips, Bryan A. Garner in ABA Journal, U.S. Constitution, Psychology Today, Jordan Almond's Dictionary of Word Origins: A History of the Words, Expressions and Cliches We Use, The Phrase Finder, Oxford Dictionaries, The Economist, Woe Is I by Patricia T. O'Connor

Print Headline: Shall you, or will you be correct?