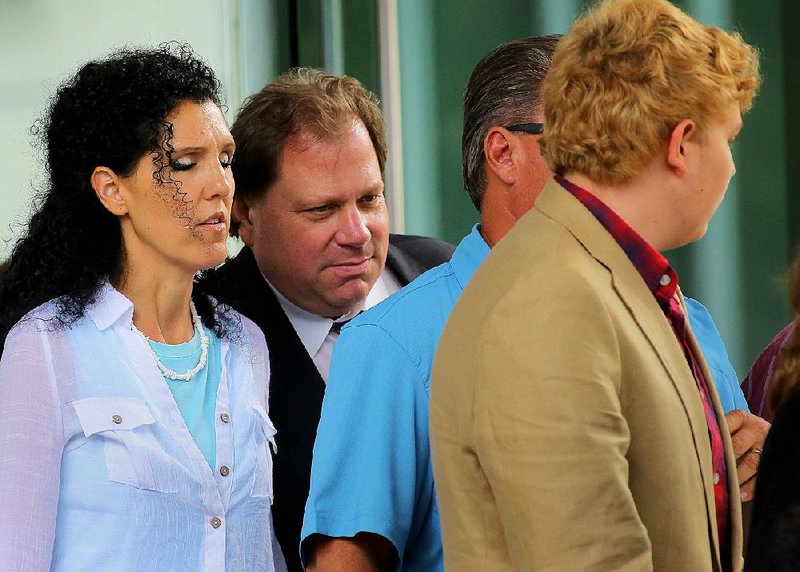 FILE PHOTO — Warm Springs businessman Ted Suhl, second from left, is surrounded by family and friends shielding him from cameras as he exits the Federal Courthouse in downtown Little Rock after verdicts were handed down in his federal bribery trial in 2016. ( Arkansas Democrat-Gazette / Stephen B. Thornton)

President Donald Trump on Monday commuted the sentence of an Arkansas businessman convicted in 2016 of bribing a state official to protect his business interests, officials said.

Ted Suhl was sentenced to seven years in prison following his conviction in October 2016. Jurors found he paid bribes for four years to keep Steven B. Jones, then the deputy director of the state Department of Human Services, on a “retainer” to benefit Suhl’s north Arkansas companies.

During the trial, jurors convicted Suhl on four of six charges he faced: two counts of honest services wire fraud and single counts of interstate travel in aid of bribery and bribery involving federal program funds.

White House officials said in the release that Suhl “was a pillar of his community before his prosecution and a generous contributor to several charities.”

Suhl has also been a “model prisoner” in prison, they said.

Check back for further information.