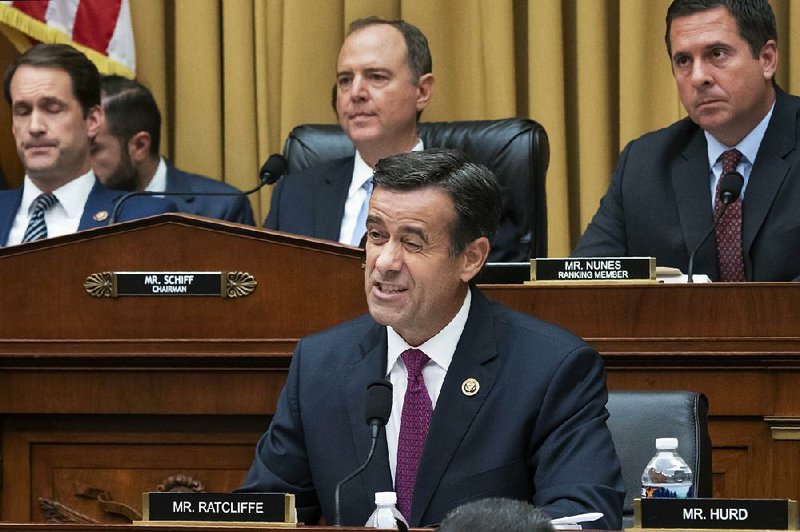 Rep. John Ratcliffe, selected by President Donald Trump as the next director of national intelligence, is shown Wednesday as he questions former special counsel Robert Mueller in a House Intelligence Committee hearing.

WASHINGTON -- For what some consider to be the most nonpartisan job in Washington -- the director of national intelligence -- President Donald Trump has selected a lawmaker with a reputation as one of the fiercest political warriors in the capital.

Trump's choice, Republican Rep. John Ratcliffe of Texas, has established himself during his nearly five years in Congress as a tough partisan and as one of Trump's most effective defenders. A relentless critic of the Russia investigation, Ratcliffe has shared some of Trump's views and earned praise from government critics.

Democrats have said he is unqualified and too overtly political, and even some Republicans privately said they thought Ratcliffe was the wrong choice, according to people familiar with their thinking. But Republicans on the Senate Intelligence Committee, which will vote on whether to send the nomination to the full Senate, are not expected to buck Trump.

The political winds from the Trump White House have buffeted the intelligence agencies, and Dan Coats, the current director of national intelligence, has worked to insulate them. If Ratcliffe is confirmed for the post, some current and former U.S. officials believe that other top intelligence officials such as the CIA director, Gina Haspel, and the FBI director, Christopher Wray, could lose their shield against White House interference and partisan criticism.

The intelligence chief "is not a political job," said Sen. Angus King, a Maine independent on the Intelligence Committee who caucuses with the Democrats.

"This isn't like secretary of state or secretary of defense. This is a fact job," he said. "Because it is human nature to want to tell the boss what he or she wants to hear, you have to have somebody with real backbone."

Ratcliffe's Republican defenders insist he is fair. His political bite is largely a virtue of circumstance, they said, adding that he harbors greater respect for the law enforcement and intelligence communities than many House Republicans in his circle.

In private, his allies said, he is inclined to give national security officials the benefit of the doubt and has defended -- sometimes against his political allies -- the need for law enforcement and intelligence agencies to have access to tools such as domestic surveillance. And despite criticisms of the Russia investigation, they point out, he did not join calls for Robert Mueller's removal as special counsel nor question evidence of Russian interference.

Democrats' criticism of Ratcliffe is "more reflective of the political environment we are in than John Ratcliffe," said Trey Gowdy, the former congressman from South Carolina who, like Ratcliffe, is a former federal prosecutor. The Justice Department has placed the FBI and the CIA under scrutiny over the origins of the Russia inquiry. And Trump has told intelligence leaders to "go back to school" for their assessments of North Korea's nuclear program.

Ratcliffe pledged in a statement Sunday to "work on behalf of all the public servants who are tirelessly devoted to defending the security and safety of the United States."

Republicans on the House Intelligence Committee have long been pushing for an overhaul of the office of the director of national intelligence, eliminating jobs, slimming the agency and changing how it operates. Ratcliffe, according to officials, is likely to try to push through some of those changes if confirmed.

In addition to the reservations over Ratcliffe's partisanship, some former intelligence officials have said they do not think he has the necessary background for the job.

The 2004 law establishing the post set the criteria for the director as having "extensive national security expertise." Ratcliffe is a former U.S. attorney and mayor of Heath, Texas, a town of nearly 9,000 outside Dallas. He joined the House Intelligence Committee this year.

Though directors of national intelligence do not have to have served as intelligence officers -- Coats did not -- they should be deeply immersed in national security and the uses of intelligence, said Mark Lowenthal, a former senior CIA official.

"This is not a great position for on-the-job training," Lowenthal said. "There is a very steep learning curve."

A legal challenge to Ratcliffe's nomination is doubtful.

But if some Republican senators have private doubts over Ratcliffe, they could use the legal requirement to slow the nomination or even oppose it.

Trump's announcement provoked fears among former law enforcement officials that Ratcliffe would continue his assault on the FBI. He is central to a group of staunchly pro-Trump conservatives in the House who have aggressively dogged the FBI and the intelligence agencies over their handling of the Russia investigation and the Hillary Clinton email inquiry, two of the most politically charged investigations in the bureau's history.

"The DNI must bring leadership to the intelligence community that fosters the independence and candor of the intelligence analysis presented to policymakers," said David Laufman, a former top Justice Department official involved in both investigations.

"Mr. Ratcliffe's partisan political behavior on behalf of the president, including attacks on the special counsel's investigation, raises serious questions about whether he possesses the requisite qualities to fulfill that responsibility."

The Justice Department's inspector general is investigating whether the FBI acted improperly in conducting aspects of the Russia inquiry. The inspector general's findings are expected in the coming weeks.