• Meghan, the Duchess of Sussex, has guest edited the September issue of British Vogue with the theme "Forces for Change." Royal officials say the issue, coming out Friday, features "change-makers united by their fearlessness in breaking barriers" and includes a conversation between Meghan and former U.S. first lady Michelle Obama. The magazine cover features 15 women including New Zealand Prime Minister Jacinda Ardern; actresses Jane Fonda, Jameela Jamil and Gemma Chan; model Adwoa Aboah; and teenage climate change campaigner Greta Thunberg. The duchess herself doesn't appear on the cover. Editor-in-chief Edward Enninful said they discussed whether Meghan should be on the front cover from the beginning, but said in the end she "felt that it would be in some ways a 'boastful' thing to do for this particular project." He added that "She wanted, instead, to focus on the women she admires." Meghan, who is on maternity leave from her royal duties after the birth of her son, Archie, had worked on the project for seven months. She said she hopes readers will be inspired by the magazine's focus on the "values, causes and people making [an] impact in the world today."

• Kathy Griffin says two days into the fallout of her 2017 photo posing with a fake severed head of President Donald Trump, she knew she should film what was happening. She was losing jobs, making headline news and the topic of widespread scrutiny, not to mention the subject of a government investigation into whether she was a credible threat. "I kept saying, 'I think this is an important, historic story,'" Griffin said in an interview. "The president and the Department of Justice shouldn't make you unemployable and uninsurable." The problem was no one wanted anything to do with her. So, she picked up her iPhone and began filming. There's no glam, no production crew -- not even microphones. Griffin says she just knew she needed to capture what was happening in the moment and to keep it real. The result is a feature film, Kathy Griffin: A Hell of a Story that's part documentary, part comedy special. She financed it herself and carried a poster on a recent press day. "Look, I made it at Kinko's, OK? I'm still on the D-list," she quipped, referring to the Bravo reality series that earned her two Emmy Awards. The film was well-received at South By Southwest earlier this year. Fathom Events agreed to show it Wednesday in 700 U.S. theaters. Griffin knows she will keep hustling. "I just want people to know you don't have to go down. You can take a few punches, but after I kick the bucket, I want somebody to go, 'You know that crazy redhead? They got her but she didn't go down.'" 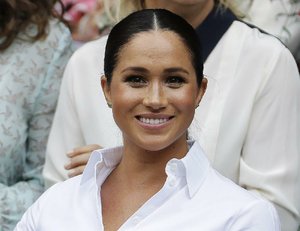 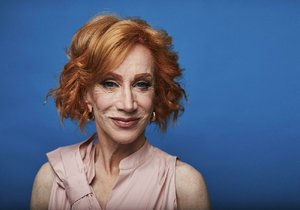