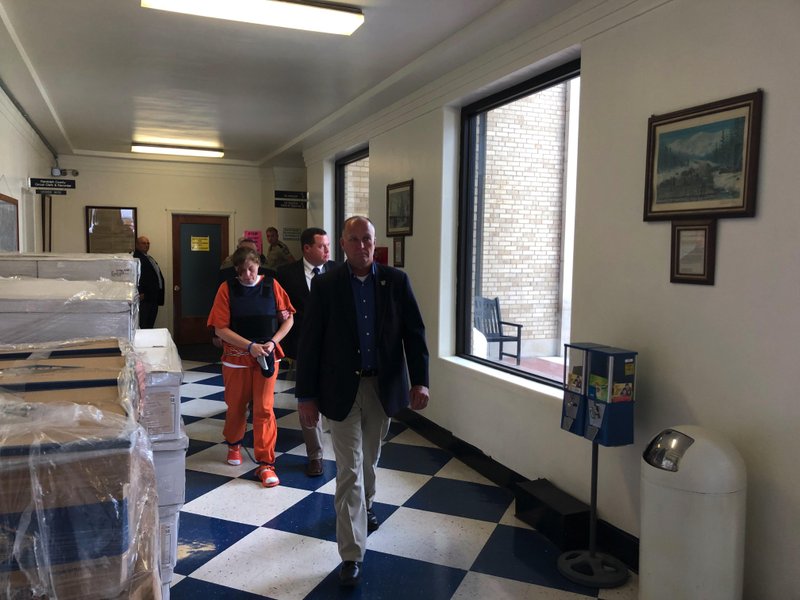 FILE — Rebecca O'Donnell is escorted through the Randolph County courthouse after a hearing on July 30. ( John Moritz)

The woman accused in a former Arkansas senator's death pleaded innocent at her arraignment on Tuesday.

Rebecca Lynn O’Donnell, 48, entered a plea of not guilty at the hearing, her attorneys confirmed.

Security footage from inside former Arkansas Sen. Linda Collins’ home, recorded on the last day she was seen alive, shows the suspect in her killing removing cameras from the residence, authorities said in an affidavit.

A judge on Tuesday lifted an order that had prevented the release of the affidavit. Two judges who had presided over preliminary matters in the homicide case, Tom Garner and Harold Erwin, issued the June order to seal the records that retired Judge David Goodson lifted Tuesday.

Officials on Tuesday released a redacted version of the affidavit that also revealed Collins was stabbed multiple times.

In the affidavit, authorities said Collins’ son, Butch Smith, called the Randolph County 911 dispatch center at about 5:30 p.m. from his mother’s home on June 4. The man said he and his grandfather, Benny Collins, found the badly decayed body of a woman wrapped in a blanket under a tarp in the residence’s driveway.

[Document not showing up above? Click here to view » https://www.arkansasonline.com/730affidavit/]

Authorities said investigators determined the corpse was moved from inside the home to the tarp.

The state Crime Lab identified the body as belonging to Collins, and determined that she died of multiple stab wounds.

Rebecca Lynn O’Donnell, 48, was arrested in Collins' slaying on June 12 while she was on the way to the former senator's visitation.

Recovered video, dated May 28, showed O’Donnell removing security cameras from inside the home, the affidavit states.

An order sealing all records related to the murder of a former lawmaker was lifted Tuesday, as the woman arrested in the case made her second appearance in court.

Retired Judge David Goodson, on special orders to hear the case, said he had agreed to lift the order Tuesday so that criminal information may be released about what led police to arrest Rebecca O’Donnell in the death of former state Sen. Linda Collins.

Goodson said that the court record, with some exceptions, should be released later Tuesday.

Prosecutors announced their plans to seek the death penalty.

The 48-year-old woman appeared clad in an orange jumpsuit. She stood between her attorneys as Judge Goodson asked if she understood the charges against her, to which she replied “yes.”

Rebecca Lynn O'Donnell, 48, has an arraignment scheduled Tuesday afternoon on charges of capital murder, abuse of a corpse and hindering physical evidence. Boyce told the Arkansas Democrat-Gazette that prosecutors will formally announce their plans to seek the state's highest punishment at the hearing.

There are currently no women on death row in Arkansas.

The former senator's body was found at her home in Pocahontas on June 4. A local judge's order to seal the case days later has prevented police and prosecutors from publicly releasing details about the murder, including the cause of death.

The local judge later recused from the case. Collins' ex-husband was a judge who served on the same circuit, and a new judge, David Goodson, has been assigned to the case.

The Democrat-Gazette wrote a letter to Goodson earlier this month requesting that the order to seal be lifted in light of rumors and innuendo about the case that have circulated online.