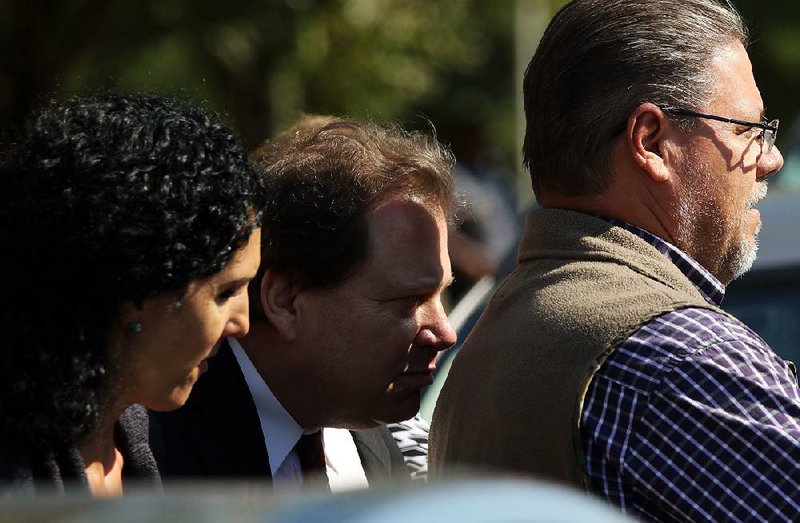 FILE — Ted Suhl, center, exits the federal courts building in Little Rock after being sentenced in a case involving the bribery of a state official.

"The President acted appropriately and mercifully to commute Ted's sentence for what was a zealous prosecution for charges that were recanted by the witnesses at his trial. He should never have been charged and certainly not incarcerated. I'm deeply grateful to the President for carefully reviewing this case and granting clemency," he said.

Upon learning of the commutation, former Gov. Mike Beebe, Huckabee's successor, was asked for comment.

Cummins, who was hired by Suhl's family to review the case, welcomed the news and questioned the U.S. Justice Department's handling of the case.

"My first thought is that President Trump should be commended for this," he said. "I hope that he and Attorney General [William] Barr continue to look at DOJ policy and tactics across the board in how they approach these cases.

"Mr. Suhl was, essentially, convicted on a circumstantial case tied together on the word of a proven liar who had broken the law on several occasions and was essentially being paid to tell the story the government's way," Cummins said.

Suhl, 54, has been housed at the U.S. penitentiary in Marion, Ill., a medium-security facility with an "adjacent minimum security satellite camp," the Federal Bureau of Prisons website states.

Suhl could not be reached Monday. But one of his attorneys, Robert M. Cary of the Williams & Connolly law firm in Washington, D.C., issued a brief written statement on behalf of the Suhls.

"Ted Suhl and his family are grateful to President Trump for exercising his constitutional authority to commute Ted's sentence. They ask that their privacy be respected as they are reunited," it said.

The White House announced the president's decision Monday morning, saying he had been "strongly encouraged by leaders in Mr. Suhl's home State of Arkansas" to grant the clemency.

It cited Huckabee and Cummins as Suhl's advocates, saying they "have devoted considerable time and effort to securing his release."

In a three-paragraph announcement, the White House press secretary's office offered a rationale for the decision.

"Mr. Suhl ran faith-based behavioral healthcare treatment centers for juveniles in Arkansas. Investigators alleged that Mr. Suhl participated in a bribery scheme to increase Medicaid payments to his company. Federal prosecutors in Arkansas declined to pursue the case, but prosecutors in Washington decided to move forward with the prosecution. Although acquitted on half of the charges filed against him, he was sentenced to seven years in prison," it said.

Suhl was convicted on four of the six charges.

A spokesman for then-U.S. Attorney Chris Thyer, whose office handled most prosecutions in the the Eastern District of Arkansas, said that although Suhl was indicted through the Little Rock office, the U.S. attorney's office eventually handed the case off to the Justice Department "as a matter of resource allocation."

The White House also maintained that Suhl's life has been exemplary.

"Mr. Suhl was a pillar of his community before his prosecution and a generous contributor to several charities. He has been a model prisoner while serving his sentence, maintaining a spotless disciplinary record," it said.

In a petition to the U.S. Supreme Court, Suhl's attorneys had also portrayed him as a generous man.

"Since 2002, the petitioner and his family have contributed more than $1.4 million to Christian causes," the petition noted. The Supreme Court opted not to take up the case.

Suhl and his wife, Laura, were also political donors, giving at least $20,000 since 1998 to Republican congressional and presidential candidates, according to the Federal Election Commission website.

Suhl and those associated with his organization had also given heavily to officeholders in Arkansas.

In addition, a company managed by Suhl, Southeastern Asset Management, had flown then-Gov. Huckabee and two of the governor's family members to a Republican event in North Carolina in 2006, according to an Associated Press article from the time.

The trip drew scrutiny after the plane was forced to make an emergency landing in Chattanooga, Tenn.

Huckabee portrayed the transportation as an in-kind contribution to his political action committee.

On July 20, 2016, a federal jury in Little Rock found Suhl guilty on four of six charges he faced in a weeklong trial, finding that he paid bribes over four years to keep a state regulatory official, Steven B. Jones, "on retainer" to benefit his companies.

Jones was the deputy director of the state Department of Human Services, which administers the Medicaid program. One of the five departmental divisions Jones oversaw regulated providers of behavioral health services for youths, like Suhl's company. 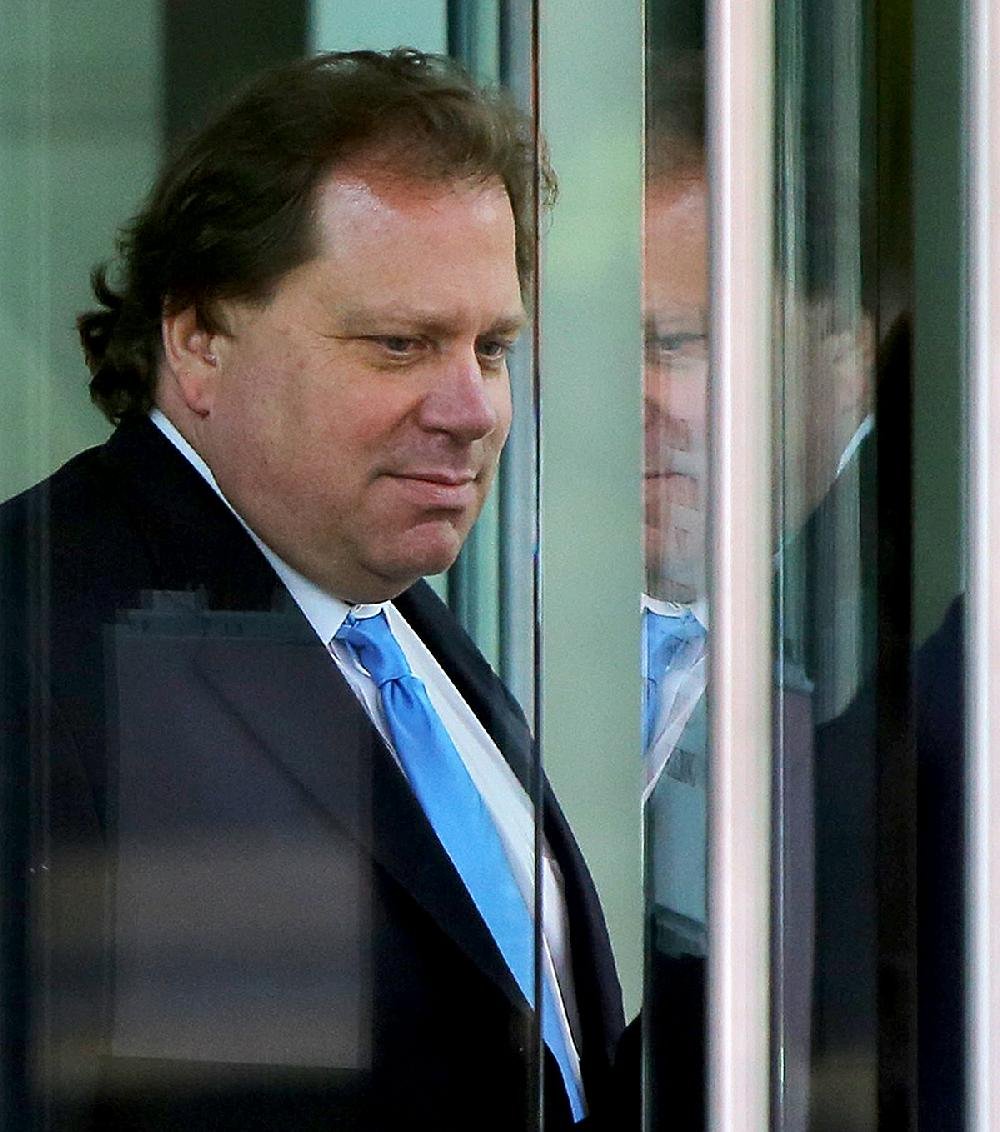 Ted Suhl, a businessman from Randolph County, is shown exiting the federal courthouse in Little Rock on the first day of his trial in July 2016.

Two of Suhl's companies, Maxus Inc. and Trinity Behavioral Health, formerly known as The Lord's Ranch in Warm Springs (in Randolph County), provided behavioral health care to youths and together received more than $125 million in state-administered Medicaid funds from April 2007 through September 2011, when Jones was at the helm of the division.

The prison sentence fell within the 78- to 97-month (6½- to 8-year) penalty range suggested by federal sentencing guidelines, but Wilson exceeded the guideline-recommended fine range of $12,500 to $125,000 on his own initiative, saying, "Using religion to grease the skids for his crimes is particularly egregious and hurts people who are straightforward in their religious beliefs."

Suhl called himself an evangelical Christian and had sought leniency based on deeds performed over the years such as helping employees pay their utility bills and offering help to people whose homes were damaged by tornadoes.

On March 22, 2018, a three-judge panel of the 8th U.S. Circuit Court of Appeals in St. Louis upheld the convictions and sentence.

Jones, who pleaded guilty to accepting a bribe and was sentenced to 2½ years in prison, agreed that he took cash disguised as donations to a West Memphis church to make Suhl believe that he was more or less "on retainer" to Suhl. Jones, who was also a former legislator, testified that he didn't actually perform any "official acts" at Suhl's request but -- by accepting $10,000 to $20,000 cash through a middleman, Phillip Wayne Carter -- that he led Suhl to believe he would share helpful information.

While Jones never specifically agreed to do any of the things Suhl requested, he told Suhl that he would "look into" the requests, and he sometimes told Suhl that he had participated in a meeting so he could gain more information for Suhl.

Jones later said he regretted having pleaded guilty. Prosecutors said he was so unhelpful as a witness that they wouldn't recommend a reduced sentence for him.

At Suhl's sentencing, Wilson noted that Suhl had refused to release his financial data to U.S. probation officers, who performed his pre-sentence report. But the judge said Suhl had earlier told the probation officers that his net worth was more than $5 million.

At Suhl's sentencing hearing, the defense attorney, Cary, called Suhl "one of the most gentle, generous and gracious people I've had the privilege of meeting," prompting Wilson to note that after reviewing the credit-card receipts from the expensive meals that Suhl bought himself, Jones and Carter at the men's periodic meetings at a Memphis restaurant, "He left a $10 tip on a dinner bill of over $100. That didn't appear very generous to me."

Suhl's attorneys appealed his conviction to the U.S. Supreme Court. They argued that the jury instructions had been flawed.

The instructions allowed jurors to convict Suhl of bribery "based on a finding that he gave a state official money with a general intent to influence that official," the petition stated. 0"[T]he instructions did not require a finding that [Suhl] specifically intended a quid pro quo exchange of money for a particular official act."

Criminalizing a "general intent to influence" an official -- "despite the absence of an express quid pro quo requirement" -- could potentially criminalize "broad swaths of activity essential to representative democracy" and could "inflate federal prosecutorial power."

While Suhl's legal appeals had been exhausted, appeals for mercy remained an option.

Cummins said he wasn't paid for seeking clemency for Suhl.

Asked, via text, if he'd been paid to advocate on Suhl's behalf, Huckabee said: "Not one dime! I have no business relationship with Ted, his family, his businesses whatsoever and never have. None. He is a friend, a fine Christian gentleman, and has operated a very effective organization to restore young people to their families. I've seen what the feds have done to him and it ought to scare every American."

The only thing Huckabee said he'd received was "the satisfaction of seeing a President have the courage to bring justice to several persons targeted for take-down by the government."

In addition to Suhl, Trump also commuted the sentence of Ronen Nahmani, a Floridian convicted in 2015 of conspiring to distribute synthetic marijuana.

"Mr. Nahmani is a non-violent, first-time offender with no criminal history. He has five young children at home and his wife is suffering from terminal cancer. These extenuating circumstances underscore the urgency of his request for clemency," the White House said.

Trump also granted pardons to five men: John Richard Bubala (convicted in 1990 of improper use of federal property); Roy Wayne McKeever (arrested in 1989 for transporting marijuana); Rodney Takumi (arrested in 1987 while working in an illegal gambling parlor); Michael Tedesco (pardoned by President Barack Obama in 2017 on a drug-related conviction, but a new pardon was needed to fix a clerical error, the White House said); and Chalmer Lee Williams (convicted of crimes relating to firearms that had been stolen in 1995.)