Both parties out to stall bill that would make it harder for people illegally in U.S. to get work, U.S. Sen. Tom Cotton says 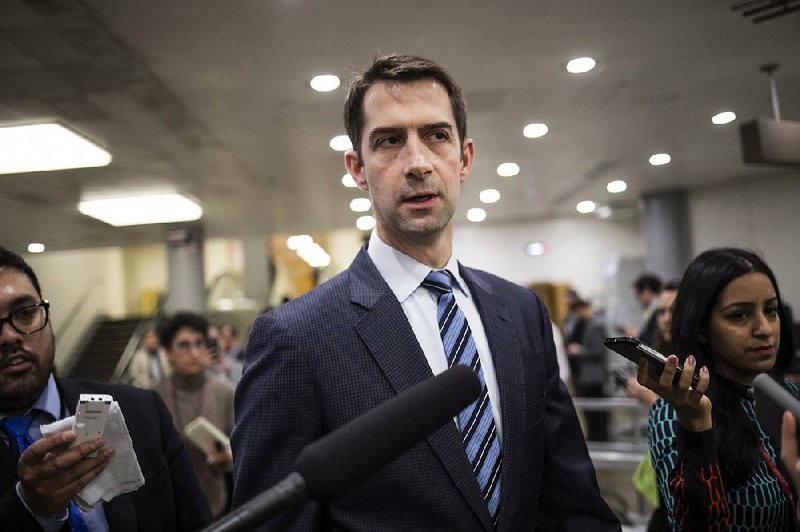 WASHINGTON -- Members of both political parties are teaming up to block legislation that would make it harder for people illegally in the country to obtain employment, U.S. Sen. Tom Cotton, R-Ark., said Tuesday morning.

The lawmaker backs a bill that would require employers to use E-Verify, a Web-based system provided by the federal government that is designed to weed out applicants who aren't authorized to work in the U.S.

But the proposal, which has 12 other co-sponsors, has been stuck in the Senate Judiciary Committee since February.

As a candidate in 2016, President Donald Trump had promised "to institute nationwide E-Verify," but has met resistance, including from within his own party.

"You have something of a silent conspiracy between the left and Republicans who kind of reflexively favor the interests of Big Business," Cotton told an audience at the National Press Building in Washington, D.C.

The Dardanelle native spoke during a "Newsmaker conversation" hosted by the Center for Immigration Studies.

The Washington-based nonprofit group, which favors tighter immigration restrictions, has embraced the E-Verify system, calling it "one of the most successful tools available to address illegal employment."

"Obviously E-Verify would make it much harder to employ illegal immigrants. Stories about false positives and glitches in the system, you know, those are 15 years old by this point," Cotton said. "E-Verify is extremely easy to use. It's very effective. The failure rate is infinitesimally small."

Many Arkansas companies, including Walmart, J.B. Hunt and Tyson Foods have already signed up for E-Verify, according to its website.

But other corporations have resisted mandatory implementation of the free, government-run system.

Trump has also been slow to implement E-Verify, according to one newspaper analysis.

"Just five of the 565 companies in President Trump's business empire are signed up to use E-Verify, the government's best tool to weed illegal immigrants out of the workforce," The Washington Times reported in December.

Known as the Reforming American Immigration for A Strong Economy, or RAISE, Act, Cotton and U.S. Sen. David Perdue, R-Ga., introduced the legislation in August 2017.

In addition to favoring younger workers with higher skills, it also would have made it harder for immigrants to bring their adult relatives to live in the U.S.

Researchers said the measure, if approved, would cut legal immigration in half within 10 years of passage and prevent many unskilled workers from gaining entry. Legal immigration allows about 1.1 million people a year into the country.

Voicing support for the concept when it was unveiled, Trump called it "the most significant reform to our immigration system in half a century."

Krikorian had called it a "serious, detailed road map for how to redo immigration."

The measure was routed to the Senate Judiciary Committee. It died at the end of the 115th Congress, never having received a vote.

Cotton reintroduced his immigration bill in April this year.

Republicans failed to pass major immigration legislation during Trump's first two years, a time when they controlled both sides of Capitol Hill.

Now, Democrats run the House, and they're moving their party leftward, Cotton said.

"The Democrats have lost their mind when it comes to immigration," he said.

"I think as the Democrats have become a party focused less on kitchen table issues, on what matters to working Arkansans ... that they've just focused a lot more on questions of race, gender, sex, identity," Cotton said.

Josh Mahony, the Fayetteville Democrat who hopes to unseat Cotton in 2020, did not immediately respond to a request for comment.

But Democratic Party of Arkansas Chairman Michael John Gray said Cotton has taken the wrong position on kitchen table issues, backing the president on tariffs that are hurting Arkansas farmers.

Republicans are also sowing discord and intolerance, he said.

"I have seen the Republican Party platform be completely divisive when it comes to race, gender and immigration," he said. "If someone is creating division and spewing racist rhetoric, as a father at my kitchen table, I'm going to tell my son that that's not OK, and I bet most fathers in Arkansas would do the same thing," he said.

Print Headline: Both parties out to stall bill that would make it harder for people illegally in U.S. to get work, U.S. Sen. Tom Cotton says