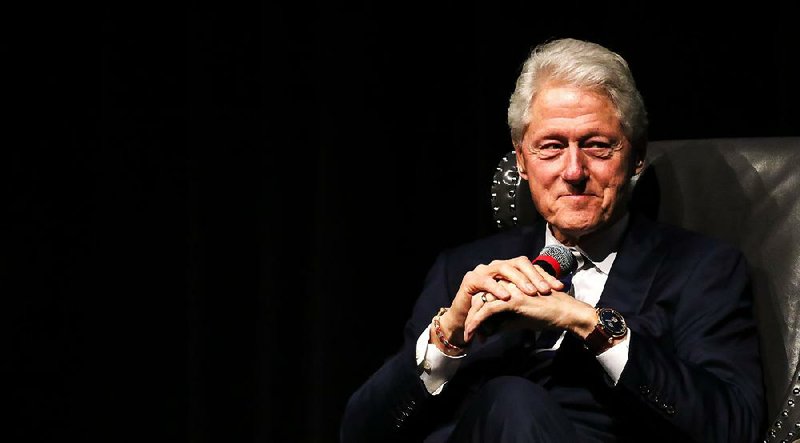 Former President Bill Clinton sits on stage as the keynote speaker for the Hope/Hempstead County Chamber of Commerce annual meeting and banquet on Saturday, April 6, 2019, in Hope, Arkansas.

Former President Bill Clinton will speak at a Nov. 21 dinner celebration at the Little Rock Statehouse Convention Center honoring the 200-year anniversary of the first issue of The Arkansas Gazette newspaper.

It's part of the Arkansas Democrat-Gazette's 200-day celebration of the Gazette's history as the oldest newspaper west of the Mississippi River.

Clinton "agreed to do it, and I understand he is very excited about it," said Ernie Dumas, a co-chairman of the celebration's planning committee and former Gazette reporter, editor and columnist. "I thought there's nobody better to talk about the importance of the free press, if he would do it."

A spokesman for the Clinton Foundation, Jordan Johnson, confirmed Friday evening that Clinton will attend.

"The banquet is an important event for the state because we want to honor the legacy of the Arkansas Gazette while also showing our faith in the future of the Arkansas Democrat-Gazette," said the planning committee's other co-chairman, Eliza Gaines, the newspaper's vice president of audience development at WEHCO Media Inc., the newspaper's parent company.

"Our community understands the importance of trustworthy, reliable journalism, and that is reflected in our past as well as our promise for the future. We are thrilled and honored to have Bill Clinton as our speaker."

"It's a moment in history," Hussman said.

The planning committee reserved the Statehouse Convention Center's 1,300-seat Wally Allen ballroom for Nov. 21 -- "200 years and one day since the first edition," said Gaines, who is also Hussman's daughter. The event is invitation only.

The Arkansas Gazette published its last edition Oct. 18, 1991, after a years-long newspaper circulation and advertising war with the Arkansas Democrat.

Hussman's Democrat bought the Gazette's assets, and he renamed the surviving newspaper the Arkansas Democrat-Gazette.

Both papers chronicled Clinton's political career from unsuccessful congressional hopeful in 1974 to serving as state attorney general and then governor. In the Gazette's final year, Clinton was a presidential candidate.

In a letter asking Clinton to speak, Dumas suggested the former president could "feel free to talk about his grievances with the press, including the Arkansas Democrat and the Arkansas Gazette."

The November event also hopes to celebrate the future of newspapers during trying economic times for the industry, Hussman said.

The Democrat-Gazette is moving toward converting its print subscribers, with the offer of a free iPad, to reading its daily publications online as digital replicas. It's an effort to "make the newspaper viable and sustainable" in the face of declining newspaper advertising nationwide, he said.

"When you put that in the context of this newspaper having been here 200 years, it's important for people to realize what a valuable treasure we have in Arkansas, something we all need to sustain," Hussman said.

Print Headline: Bill Clinton to speak in honor of paper at banquet set for Gazette’s 200th