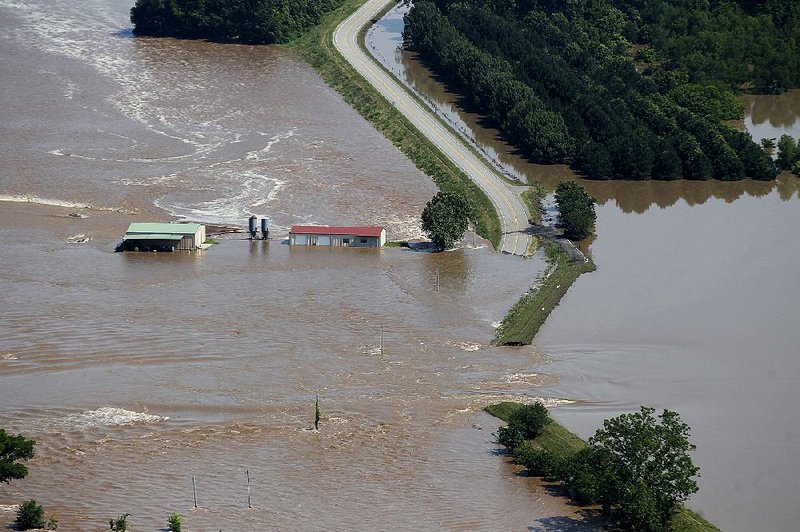 Floodwaters from the Arkansas River rush through a broken levee Friday in Yell County south of Dardanelle. More photos are available at arkansasonline.com/61flooding/.

DARDANELLE -- The Dardanelle Levee on the Arkansas River burst about 1 a.m. Friday, sending a flood of water into rural Yell County toward Dardanelle, authorities said.

Yell County's County Judge Mark Thone said he walked along the levee Thursday, hours before deputies began going door to door to recommend the evacuation of residents in Holla Bend and the surrounding communities.

"It was spongy," Thone said. "It has absorbed as much as it could. We went out there today, and it's just destroyed. Once the water came over the top, it was over."

The Arkansas River reached 45.1 feet Friday, 13 feet above flood stage, and is expected to rise another foot by Sunday, far above flood records set in the 1940s, according to the National Weather Service.

Communities along the river have been preparing for flooding for days, but Dardanelle Mayor Jimmy Witt said even experienced river dwellers haven't seen anything like this.

Dardanelle is south of the Arkansas River and north of Smiley Bayou, which normally feeds into the river, but during such flooding the bayou can become a path for backwater. Smiley Bayou's drainage points have been filled with sandbags, Witt said, but the water continues to rise.

"Our fear has been that one of these levees would breach, fill up the bayou and start heading toward Dardanelle," Witt said Friday afternoon. "Now we have this section of water that's coming toward us."

About 250 feet of levee was destroyed, Thone said. The water had inundated acres of farmland within the county and was headed toward Dardanelle proper, where Thone said about 350 homes were in danger of flooding.

Witt said Friday evening that the water was about a half-mile from Dardanelle, and he had no way of knowing how quickly it would move.

"We're dealing with an unknown situation that nobody can do anything about," he said. "Through all the disasters I've been on in my life, this has been the worst one because it's unprecedented. With disasters, you can always go back and look at what was done before to mitigate the bad. You can't do that. ... There's no answer."

Chris Gray, commander of the Yell County sheriff's office mounted patrol, said he arrived near the Dardanelle Levee at 6 a.m. Friday to keep residents from traveling over flooding roads and areas.

"The water wasn't over the road yet then," he said, glancing over a flooded field as water rushed over Arkansas 155 near Holla Bend. "It wasn't even in the field yet. It's coming in fast." 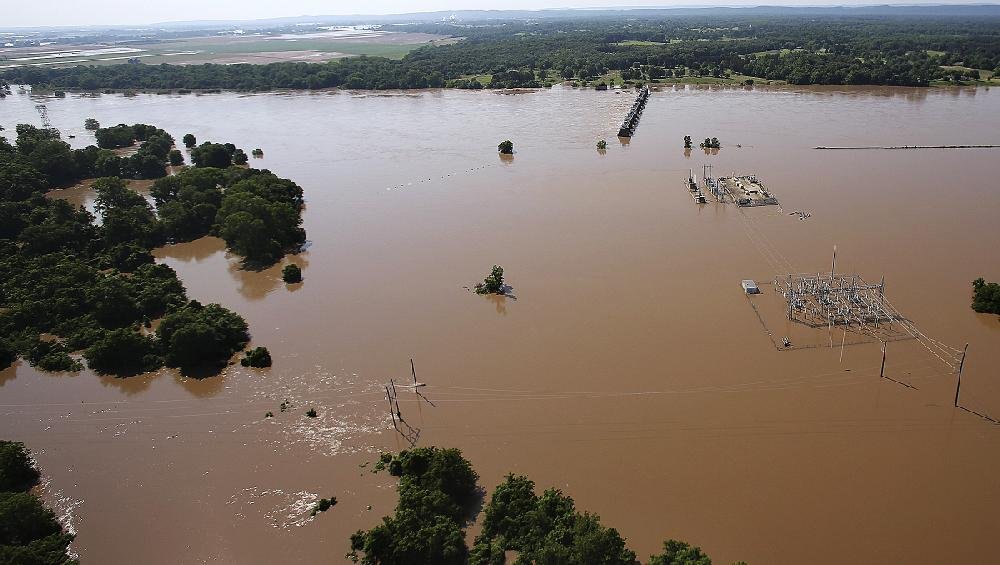 The Arkansas River flows well out of its banks Friday as it swirls past the Arthur V. Ormand Lock and Dam near Morrilton. More photos are available at www.arkansasonline.com/61flooding/

By Friday afternoon, both highways in that area were closed, Thone said.

"We have some people who may be affected because the high water is over the road, even though their home is safe," Thone said. "They may not be able to get to that area."

Arkansas Department of Emergency Management spokesman Melody Daniel said a rumor that the lock and dam north of Dardanelle was collapsing was false. Ground around the lock and dam's switch station was eroding, she said, and emergency crews were working to fill the erosion with rocks.

"The water coming up creeks and the backwater, that's my main concern now," Witt said Friday. "We've had a few homes and businesses flooded, and we've been preparing for that for days."

The Arkansas Department of Transportation on Thursday wanted to close the Arkansas 7 bridge that connects Dardanelle and Russellville, where water has crept into two of the road's four lanes, but Witt said he worked with Yell County and Pope County officials to keep one lane open in each direction.

"If that bridge closes, we'd have major issues," he said. "People who work in Russellville live here, and people who live there work here. We need them to be able to go to work."

John and Beth Richardson were notified by phone Thursday evening that their home between Centerville and Dardanelle was in the new, extended flood zone.

"This surprised us," Beth Richardson said as she sat in a truck outside the American Red Cross shelter set up in the Dardanelle Community Center. "We just moved here a few months ago, and we don't have family here. We don't have anywhere to go." 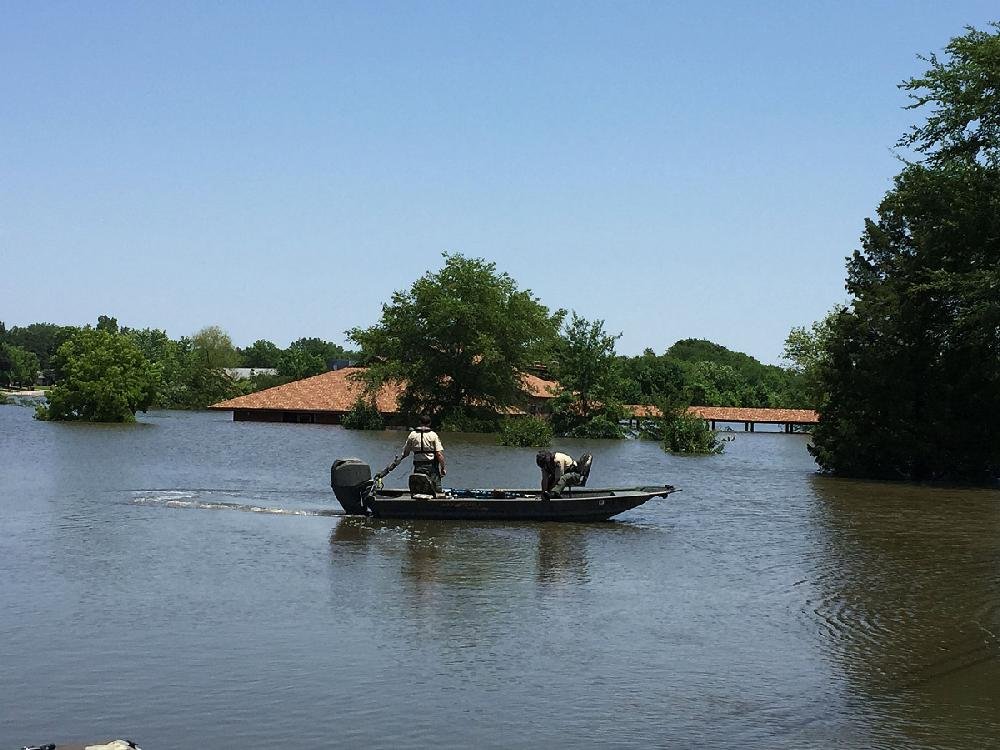 Officers from the Arkansas Game and Fish Commission moter along Rogers Avenue in Fort Smith on Friday. “We are sitting here at the mercy of Mother Nature,” Eddie Lee Herndon, president of the United Way of Fort Smith Area, said at a media briefing Friday morning.

Loaded into the Richardsons' truck were a few cases of water, clothes enough for them and their son for a week, and two large dogs.

"The shelter can't take pets, but we won't leave them," she said. "They're family."

Dak and GG -- an American bulldog and a pit-bull mix -- sat in the back of the Richardsons' truck as the family waited to hear from a shelter spokesman.

"If we can just pitch a tent somewhere, that will be fine," John Richardson said, gesturing to the bed of the truck, where a tent and several run lines for the dogs sat.

"The shelter has been great. They're trying to help us find somewhere where we can be together. We're not going to leave them behind."

Red Cross shelter manager Becky Eisenbraun said the shelter has kennels for pets, but the facility is far from the shelter.

Eleven people were staying in the shelter Friday, though Eisenbraun said she expected more to filter in because of the levee break.

Eisenbraun, who lives in Hill City, S.D., first went to Fort Smith to help manage that shelter before moving on to Dardanelle.

"I am disabled, but the Red Cross lets me do what I am capable of doing, and I've found my calling," she said. "Regardless of my disability, I get to help people in need, and that's what I want."

Eisenbraun said church groups were taking turns cooking and serving food. Tyson Foods donated all of the shelter's meals, and residents were available to help at the center.

"We have volunteers coming out of our ears," she said, smiling. "It's truly amazing to see. I wish it wasn't necessary, but it's beautiful."

Dardanelle Parks and Recreation Director Willie Lawhon said the city had sandbag preparation sites on Front Street, and at Fifth and Tucker streets.

On Front Street, Joe Cummings was picking up three pallets of sandbags on a flatbed trailer.

Cummings lives off Smith Street, and his home is within reach of the encroaching water, but he said his home is prepared. Now he's trying to help others get ready.

He's lived through several major floods in Dardanelle in his 11 years since moving there, and he understands the danger that the Dardanelle Levee rupture presents.

"I've seen that park covered over two, three times since I've moved here, but this back-flow is something else," he said. "It's dangerous."

"The levee is in such bad disrepair in some places," Thone said. "But the area where it topped, that's not one of the bad places. The levee did its job. There was just too much water there."

[STORY: State now under emergency declaration. So what does it mean?]

Recent Corps records indicate that Yell County government sponsors the levee, but the 2010 inspection report obtained by the Arkansas Democrat-Gazette indicated that the "levee district does not currently have a public sponsor to operate, maintain, and perform necessary levee safety functions."

If no one sponsors the levee, the levee becomes the responsibility of the county judge, Little Rock Corps spokesman Laurie Driver said.

The Dardanelle Levee appeared to breach after it was overtopped, Driver said. Thone, who was near the levee when it burst, said it took only minutes for the water to erode and destroy a section of the dirt construction.

"Cuts, vegetation, culverts that haven't been maintained -- there's a laundry list of different items that make a levee not as efficient, or susceptible to strains and failure," she said. "All of the levees in the Little Rock District are under a lot of strain right now. They weren't designed to hold back as much water as they're holding back for as long as they're holding it back."

The Arkansas Natural Resources Commission does not have a report for the levee, which county clerks are required to send to the commission under an Arkansas law passed in 2016 that's designed to reactivate defunct levee districts.

The Corps made numerous recommendations for fixing the levee, while acknowledging the levee's lack of sponsorship.

The Dardanelle Levee was federally constructed and later handed over to local control, according to Corps records.

The Arkansas River in Van Buren was at 40.73 feet late Friday afternoon, just shy of the predicted crest of 40.8 feet, which is expected to occur today. The river broke a 74-year-old record when it passed the 38.1 feet mark Sunday. The river has been in major flood stage at Van Buren since May 23.

"We are sitting here at the mercy of Mother Nature," Eddie Lee Herndon, president of the United Way of Fort Smith Area, said during a media briefing Friday morning at the Fort Smith Regional Chamber of Commerce.

"We have around six days of leveling off, and then what I'm hearing is we'll have maybe four days of drawdown, withdrawal of the water," he said.

He advised people to refrain from driving on the flooded highways, even if they have vehicles with considerable clearance.

The only two highways passing through Central City have been closed for a week because of high water, according to the Arkansas Department of Transportation. The closed sections include 4.4 miles of Arkansas 22 and 2.48 miles of Arkansas 255.

Conway County officials said Friday that a damaged drainage pipe under a levee in the county continues to cause problems.

"We are doing everything we can to get that drainage shut down," County Judge Jimmy Hart said. "It has been leaking water since Tuesday, and we are going to hopefully get a crane to drive some pylons into it to fix the problem."

The leak appeared earlier this week and allowed floodwaters to flow through the pipe that runs under and through the levee and into agricultural fields toward Arkansas 9 in Oppelo. Multiple efforts have been made to fix the problem, but none had worked as of Friday afternoon. Several fields have flooded.

"We should know if the crane idea or the pile driver works in the next 24 hours," said Hart, noting that the rest of the county's levees are holding. "Our main concern this week has been fixing this issue."

Informaton for this article was contributed by Emily Walkenhorst, Bill Bowden, Stephen Simpson and Dale Ellis of the Arkansas Democrat-Gazette. 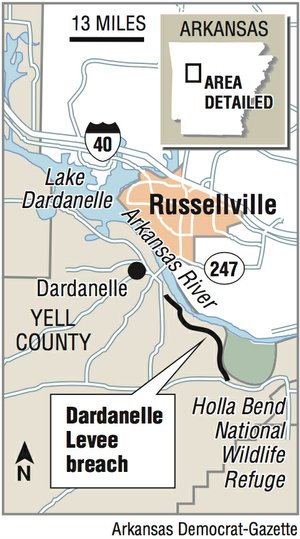