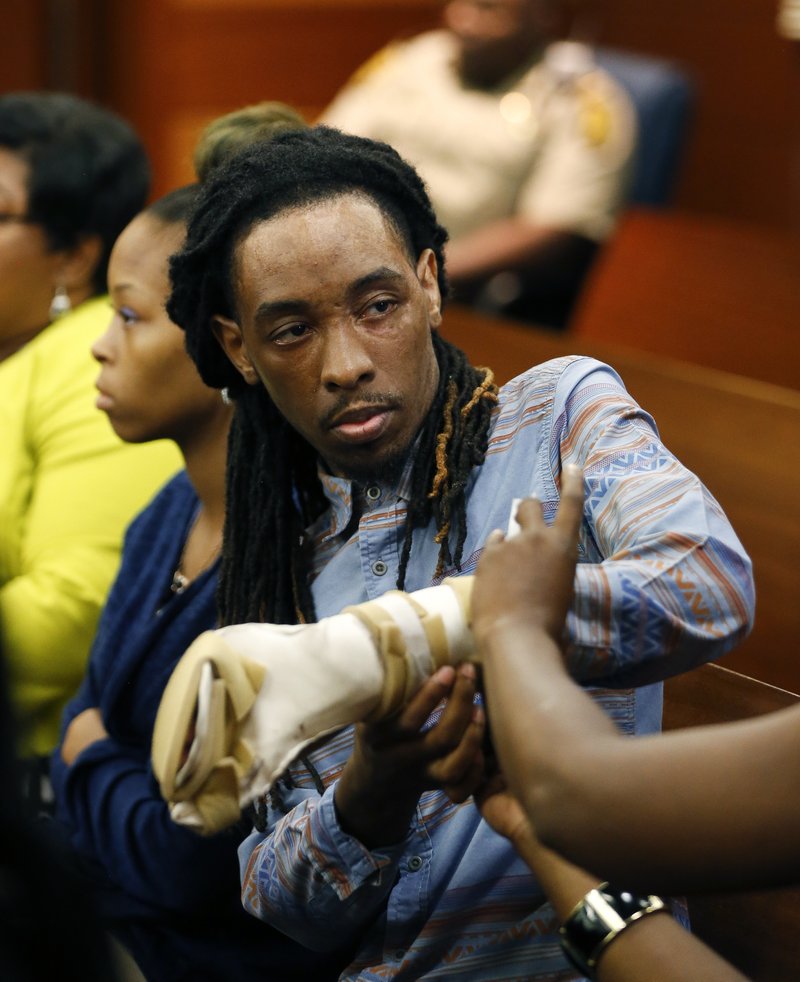 FILE - In this Aug. 24, 2016 file photo, burn victim Anthony Gooden gets help with his injured hand during a break in the trial for Martin Blackwell in Atlanta. Blackwell, who was convicted of throwing scalding water on a Gooden and his boyfriend while they slept, told one of them to &#x201c;get out of my house with all that gay,&#x201d; a victim testified, but he couldn&#x2019;t be charged with a hate crime because the state has no such law. Georgia is one of only four states - along with South Carolina, Wyoming and Arkansas - without an official hate crimes law. (AP Photo/John Bazemore, File)

ATLANTA -- A Georgia man convicted of throwing scalding water on a sleeping same-sex couple told one of them to "get out of my house with all that gay," a victim testified.

However, the man couldn't be charged with a hate crime because the state has no such law.

Victim Anthony Gooden said in a recent interview that he still can't use his left arm, which was severely burned in the 2016 attack, and that he wears a brace. He can't tie his shoelaces or work. Martin Blackwell was sentenced to 40 years in prison for the crime.

"Forty years is not enough to have your skin turn different shades of colors and peel off," said Fani Willis, who prosecuted the case and said she would have considered using a hate-crimes charge. "Those young boys were burned because of their sexuality. We have to acknowledge that it was a hateful reason."

Georgia is one of only four states -- along with South Carolina, Wyoming and Arkansas -- without an official hate-crimes law.

Georgia actually passed such a law in 2000, and it defined a hate crime as one in which a victim or his property was targeted because of bias or prejudice. An earlier version of the law specified that it applied to crimes motivated by race, religion, gender, national origin or sexual orientation, but the inclusion of sexual orientation was deemed too controversial, so all the specific motivations were dropped.

Georgia's state Supreme Court struck down that law in 2004, calling it "unconstitutionally vague." Justice Carol Hunstein at the time wrote that the hate-crimes law could be invoked to prosecute "a rabid sports fan convicted of uttering terroristic threats to a victim selected for wearing a competing team's baseball cap."

Subsequent efforts to pass a hate-crimes law have been unsuccessful. Bills that would have brought Georgia in line with federal law failed to pass over the past two legislative sessions.

Advocates, including district attorneys, say a hate-crimes law is important to send a message of validation to victims and intolerance to perpetrators.

In late 2016, an admitted member of the Aryan Brotherhood was in a passenger seat of a truck when he shot at a black driver's car and then yelled racial slurs in the presence of police. In 2015, a couple interrupted a black child's birthday party with Confederate flags, racial slurs and armed threats. That same year, a former fire captain pointed a pistol at a black couple while yelling racial slurs at them outside an Applebee's.

Those cases resulted in lengthy prison sentences, but a hate-crimes law could have extended their terms.

The most recent Georgia bill would have added penalties for those convicted of targeting victims based on race, color, religion, national origin, sexual orientation, gender, and mental or physical disability. Any hate crime tied to a misdemeanor offense would result in up to one additional year in prison; a hate crime tied to a felony would mean at least two additional years.

States have been passing hate-crimes laws since the 1980s, but they vary. A 2009 expansion of the federal hate-crimes statute enacted under former President Barack Obama included sexual orientation and gender identity as protected categories, but 16 states with a hate-crimes law do not explicitly protect either group, according to the Human Rights Campaign, a national advocacy group for gay, bisexual and transgender individuals.

The newer federal protections have becoming a sticking point for some Republicans and their religious base.

"We do find it troubling when terms such as 'sexual orientation' or 'gender identity' become a higher standard of prosecution for certain crimes," said Mike Griffin, a spokesman for the Georgia Baptist Mission Board, which represents more than 3,500 churches. Griffin added that no one should be mistreated or physically abused because of their sexuality.

The most recent Georgia bill, sponsored by a Republican, got stuck in a Senate committee after passing the House. Senate Judiciary Chairman Jesse Stone, a Republican from Waynesboro, did not respond to phone calls requesting comment on why the bill was not heard in his committee.

Stone previously said he believes victims should have an equal chance at justice and isn't sure increased penalties for crimes against certain people is the best way to go, according to The Atlanta Journal-Constitution.

For years the idea of equal justice has been one of the primary arguments against a hate-crimes law in Georgia. When the Georgia Supreme Court struck down the original hate-crimes law in 2004, then-Senate President Pro Tempore Eric Johnson, a Republican, praised the ruling.