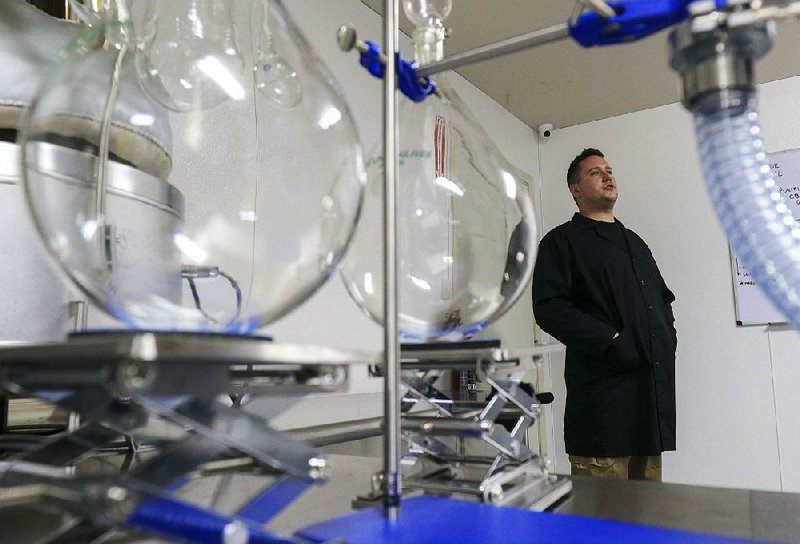 “You can smoke as much hemp as you want to try and get high, but all you’re going to get is a headache,” said Lejen Lotspeich, chief scientific officer of New Age Hemp. The crop has only a small amount of THC, the compound that makes a person high.

While Arkansas' medical marijuana industry has begun to take shape in a very public way, marijuana's tamer cousin is quietly taking off.

A pair of hemp farmers harvested the state's first legal yields, and the first processor has extracted the first batch of the substance that makes this new crop so valuable -- cannabidiol, better known as CBD.

Industry experts expect the CBD market in Arkansas to explode over the next five years, and some farmers hope they've found their newest cash crop.

CBD oils, tinctures, gummies, vapes and a variety of other infused products from out of state have already begun flooding shelves in Arkansas smoke shops, convenience stores and health boutiques.

But knowing exactly what's in those products can be difficult, if not impossible. Producers in Arkansas hope that locally sourced CBD will offer consumers more products that improve their lives and give them peace of mind at the same time.

CBD is a cannabinoid -- one of the chemical compounds derived from cannabis plants. It's found in hemp and, yes, marijuana. The difference between hemp and marijuana is the percentage of another cannabinoid -- delta-9-tetrahydrocannabinol, better known as THC, the compound that makes a person high.

Hemp, according to the U.S. government's definition, must contain less than 0.3% THC.

CBD doesn't have the intoxicating effect of THC, but its loyalists swear by its healing properties. CBD retailers must be careful; they're barred from making certain claims about the substance's health benefits because it hasn't gone through U.S. Food and Drug Administration trials.

Research on CBD's effects is limited, in part because hemp was a federally controlled substance until last year, but studies in other countries have found that CBD does show anti-inflammatory properties and the ability to block oxidative stress. The National Center for Biotechnology Information defines oxidative stress as "a disturbance in the balance between the production of reactive oxygen species (free radicals) and antioxidant defenses."

Inflammation and oxidative stress are two of the common components in a variety of chronic diseases.

Scientists are studying whether CBD can treat certain autism disorders and brain cancers.

Still, most evidence remains anecdotal, and CBD users have reported what sounds like a miracle drug that treats issues including pain, anxiety, epilepsy, nausea and hangovers.

Nick Landers, CEO of New Age Hemp and a longtime pharmacist, tried CBD as an alternative treatment for his back pain. It worked so well that he stopped taking his prescription medication, he said.

"I'm a guinea pig because I'm not going to put a product on the market that I haven't tried myself," Landers said.

Landers no longer practices pharmacy, though his license remains active. But he said he wished that he'd been able to recommend CBD products to patients who were prescribed and later became addicted to opioids.

The Arkansas Agriculture Department started its Industrial Hemp Research Pilot Program after the General Assembly passed legislation authorizing it in 2017. The department has licensed 80 hemp farmers to grow on more than 1,898 acres in 42 counties. It has issued 18 processor licenses to extract CBD from the plants.

The yields to this point have been extremely small, harvested from plants grown in greenhouses. The agency expects the first flood of harvests in early fall.

"I think years down the road, fiber and grain processing will see some profit," he said.

Kelly Carney is owner of North Pulaski Farms, a small grower of organic fruits and vegetables. He got a license to grow hemp because he saw it as an opportunity to supplement his farm, which has seen margins thin.

"I think for a small farmer, there is a window of opportunity to make some money since [hemp] is so new," he said.

Carney is growing high-quality flower from which a processor will extract CBD. He expects it to be his most profitable crop this year.

"It will allow me to keep growing heirloom tomatoes," he said.

From the farm, the hemp moves to a processor like Lotspeich or Kindle Lancaster of Helping Everyone Make Progress in Dardanelle.

The CBD is extracted by going through an ethanol wash. Then the ethanol is evaporated off, and the CBD is further purified into a distillate.

From there, it can be infused into oils, tinctures, creams and a host of other consumables.

So far, New Age Hemp has developed oil that can be ingested or rubbed into the skin. The company is reaching out to retailers, hoping to soon make products available to the public.

Helping Everyone Make Progress plans to sell its purified CBD to other processors and will process some consumer products itself to be sold from its location at the base of Mount Nebo, said Lancaster.

Lancaster, who also has a growing license, is planting about 22,000 hemp seeds. She has had a hip replacement, and she said CBD products have helped her manage joint pain.

"I think this will very much take off," she said of the hemp industry. "I don't see it slowing down any at all for the next five to eight years."

The Hemp Business Journal estimated that the hemp-derived CBD market totaled about $190 million in 2018, and the market is projected to reach $22 billion over the next five years.

The problem for consumers is that the processed CBD is largely unregulated. In Arkansas, state regulation ends with the state Plant Board's testing to ensure THC levels don't exceed 0.3%. The FDA is currently assessing how it should regulate CBD.

The FDA held an all-day hearing Friday -- with 120 speakers scheduled to talk for a few minutes apiece -- to learn more about products containing cannabis and cannabis-derived compounds and hear suggestions on how the agency should regulate them and the products they are in. The FDA also is taking public comments online until July 2.

Lotspeich said the consumer's only recourse presently is to do the homework. On a recent tour of New Age Hemp's lab, the company offered a copy of its product's most recent lab analysis, which it says it will supply to anyone who asks.

The analysis, conducted by F.A.S.T. Laboratories and Research of Greenbrier on May 9, shows that New Age Hemp's isolate is 99.9% CBD with no traceable amount of THC.

For now, CBD users and producers will wait on the science to catch up. And some, like Lancaster, are also waiting on public opinion to change.

Many still don't know the difference between hemp and marijuana, as Lancaster found out when she told her church group about plans to begin growing hemp.

"I tell everybody this is Mary Jane's good sister," Lancaster said. "She doesn't party." 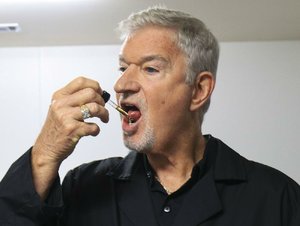 Photo by Staton Breidenthal
Nick Landers, chief executive officer of New Age Hemp, takes several drops of the company’s CBD oil as he demonstrates how he uses the product. Landers says he uses it as a treatment for his back pain.