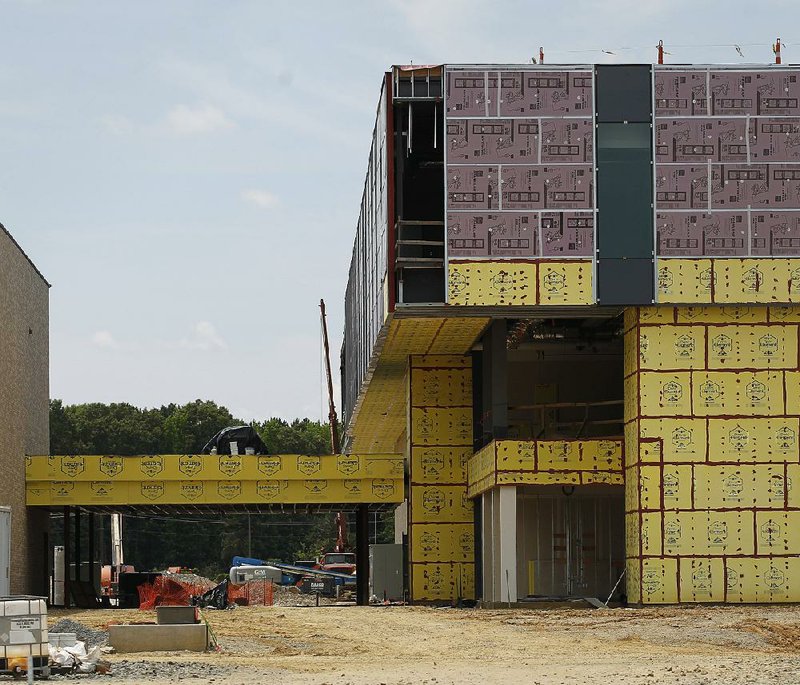 Construction of the Little Rock School District's colossal Southwest High School -- 14 months away from completion -- is unquestionably the biggest but not the only facility work underway this summer in the capital city system.

District leaders are using students' summer break that started this past week to air-condition, roof and otherwise complete construction and repair projects at multiple campuses in the 22,000-student district.

Kelsey Bailey, the district's chief financial officer, said the district is using the proceeds from the 2017 issue of $92 million in second-lien bonds to pay for a lot of the work, some of which was completed or at least started last summer and some of which is getting underway now.

"Our average building age is about 70 years old. We have aging building assets," Bailey said recently about the need for fixes and upgrades.

Kevin Yarberry, the district's director of maintenance and operations, said efforts are being made to finish the air-conditioning of previously un-air-conditioned school kitchens and gymnasiums.

"We did about half the kitchens that needed to be done last summer and the other half are to be done this year," Yarberry said in a recent presentation to the district's Community Advisory Board. "We did put a focus last year on some gyms that were more of a challenge for us," he also said. "We are cleaning the rest of that up this summer. Most of what we have this summer are middle school gyms."

The Forest Heights cost is actually for air-conditioning both the kitchen and the school's gym. The project was combined for the sake of efficiency.

"The way the market is right now -- the economy -- everybody is busy and trying to get their work schedule out as far as possible," Yarberry said.

"Parkview is currently underway," Yarberry said. "We started it during spring break. We tried to get is started in the winter but we couldn't. So we started it after basketball season and hope to wrap it up probably late June."

The other gym projects are to start this month.

Roofing is another big target for this summer, Yarberry said.

Pulaski Heights and Watson in particular had or have roofs of up to 40 years old. Typical roofs are good for 20 years, he said.

"The Central roof has been giving us a lot of fits," Yarberry said, noting that it is the focus of a lot of work right now. Because of the way the roof has been constructed and repaired over time on the nearly century-old landmark, the roofers will have to demolish portions of the roof down to the decking to rebuild it correctly.

There are portions of the Central roof that have verifiable hail damage for which the district is anticipating receipt of insurance payments.

Stephens has a metal roof but water was getting into the building, prompting the need for an outside consultant to identify the the cause -- improper installation of some sections that must now be fixed.

In regard to lighting upgrades, an effort is being made to replace the district's remaining T12 lighting systems, which are at Martin Luther King Jr. Elementary and at the district's administration building, with LED lighting.

T12 lights are no longer manufactured, Yarberry said, making it difficult and expensive to find and purchase bulbs. LED lighting, on the other hand. has become much less expensive in recent years.

"This is the solution that makes the most sense from a cost perspective," Yarberry said, noting that LED lights will reduce utility costs and make the district eligible for significant rebates from Entergy -Arkansas.

Still other projects include addressing drainage in areas prone to flooding in heavy storms.

That includes the courtyard between the Parkview's academic building and the gymnasium, which is projected to cost about $34,648 to correct, and the Parkview fieldhouse parking lot that receives water and silt running down from the auditorium. That cost has not yet been determined.

The main playground at Western Hills Elementary is at the bottom of a hill and is subject to being washed out. It is will cost $118,150 to correct.

"We've designed a project that not only addresses the problem with the asphalt but we asked the engineer to separate the bus traffic from the parent drop-off traffic. We've been able to do that," Yarberry said. "Believe it or not, we redesigned the parking lot and gained five new parking spaces."

Most of the parking lot is in such bad shape that Yarberry said the current asphalt must be removed, the area re-graded, fill added and then new asphalt put down.

The First Student school bus transportation lot -- the property for which is owned by the Little Rock School District -- also needs to be addressed, but a schedule for doing the work in phases and a cost are yet to be determined.

Another project in the works is the installation of a traffic signal on Chicot Road at the entrance to Chicot Elementary School, at a cost approaching $200,000. The signal has become a last resort to slow down speeding drivers through that school zone.

"We have a lot of challenges at Booker, including unabated asbestos floors that have been covered and recovered multiple times," Yarberry said. "Some areas have been abated but not all of it. The school's gym floor needs to be replaced and the front of the school redesigned to make it more inviting as well as compliant with the federal Americans with Disabilities Act," he said.

Plans call for the Booker work to be divided into three phases with one phase to be done each summer for three years.

As for the new Southwest High School, which was started in 2017 and is scheduled to open in August 2020, Yarberry said in an interview that about 60 percent of the job is done. The project is on schedule.

"We definitely have a full 14 months of construction left, he said about both the exterior and interior of what will be a 400,000 square-foot structure to serve as many as 2,250 ninth through 12th graders.

"There are finishes on the outside of the building but there's more to do," he said. "We have most of the windows set and there's been a lot of brick laid. We're almost finished with the roof on the academic building, but we have quite a bit of finish work, and still a lot of electrical and mechanical work taking place inside the building, as well."

Work on the school's football stadium will start this summer, within the next six to eight weeks, he said.

The new high school will be the largest school in the Little Rock School District and the first high school built in the district since work started on Parkview High in 1966.

The new school -- home of the Gryphons -- is accessible by taking Exit 130 off Interstate 30. It is on 55 acres at Mabelvale Pike and Richsmith Lane, behind the Home Depot store at 11 Mabelvale Plaza Drive.

When it opens, Southwest High will replace both McClellan and J.A. Fair high schools. Deputy Superintendent Marvin Burton has been named the school's principal.