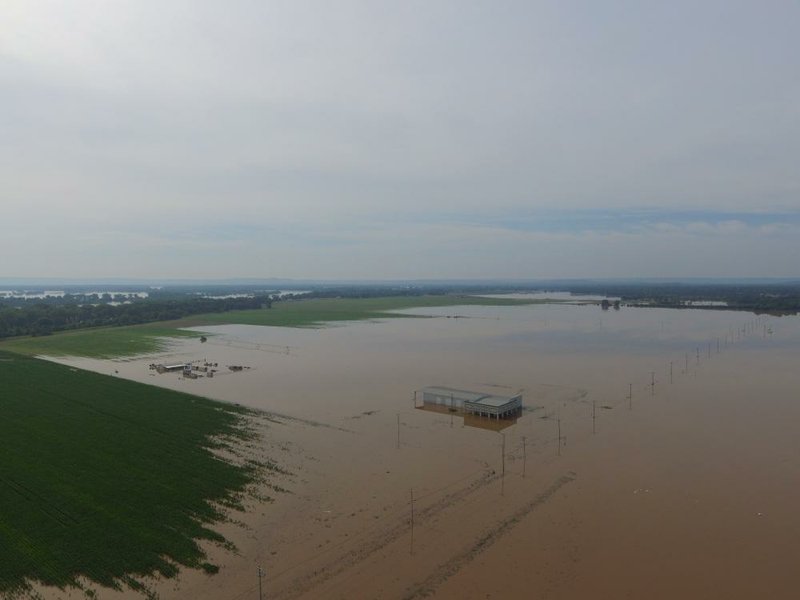 Water from a breach in the Dardanelle Levee on the Arkansas River spilled into parts of Yell County over the weekend, inundating homes and covering Arkansas 7 and several other roads.

DARDANELLE -- The flooding that threatened to inundate parts of Dardanelle slowed overnight, easing the immediate risk to many residents in the Yell County town, authorities said Sunday.

Other towns and counties along the flood-swollen Arkansas River also got good news Sunday, as water began receding in some areas and some anticipated crest levels were lowered.

Dardanelle Mayor Jimmy Witt, who was driving through town early Sunday to see how high the water had risen, said the breach in the Dardanelle Levee equalized late Saturday night, greatly reducing the amount of water spilling into rural Yell County.

"There's a lot of variables we're watching that could change, but we think we're in a good place today," Witt said. "We're moving from a 'prepare' mode to a 'response and recovery' mode today."

The Arkansas River crested in Dardanelle on Sunday at 45.3 feet, one of several historic levels along the river's path. Multiple cities are expecting to experience record or major flooding, and backwater seeping into creeks and smaller tributaries threaten multiple residential areas.

Officials across the state were briefed Sunday morning via teleconference as emergency officials from all counties affected by flooding gave status updates for their counties, beginning with a briefing by the National Weather Service. Dennis Cavanaugh, warning coordination meteorologist, provided updated information for the 15 Arkansas counties being subjected to flooding by the Arkansas River.

Cavanaugh reported that the Arkansas River level at Van Buren was at 39.7 feet at 8 a.m. Sunday and was beginning to fall. At Ozark, he said, the river elevation was at 374.9 feet above sea level and holding steady. Flood stage at Ozark is 357 feet.

At Toad Suck, he reported the river level was at 284.8 feet elevation, and is only expected to rise to 285.1-foot crest today.

"That's a foot lower than we expected yesterday," he said, "so we're finally beginning to see some semblance of good news coming out of the Arkansas River."

He said Little Rock was a half-foot below the expected crest of 29 feet, forecast for sometime today.

At Pine Bluff, the Arkansas River was at 49.7 feet at 8 a.m. Sunday. The crest there is expected to be 51 feet sometime late Wednesday, he said.

At Pendleton, the expected crest is still nearly a week away, predicted for 37 feet on Friday. Sunday morning, the Arkansas River level at Pendleton was at 34.9 feet.

All locations of the river are still in major flood stage.

"We still have quite a bit of water moving down the Arkansas River," Cavanaugh said. "That said, it doesn't look like things are getting significantly worse."

Cavanaugh said, as of Sunday morning, there had been no reported major levee breaches in the previous 24 hours.

"That is due to some truly heroic efforts by local, county and state officials, and the Arkansas National Guard, all up and down the Arkansas River," he said. "The water continues to put a lot of pressure on the levees but at least we haven't heard of any letting go."

"There's no way for us to fill it," Witt said. "If the river goes down to about 43 feet, it could naturally drain."

The river is predicted to drop to 43.5 by Tuesday morning, according to the National Weather Service, but Witt said the incoming rain could keep the water level steady or even raise it.

Cavanaugh said another 2 to 4 inches of rain is expected in Arkansas and upwards of 5 inches of rain in Oklahoma, all of which could have some impact on the duration of the flooding here, among other problems. 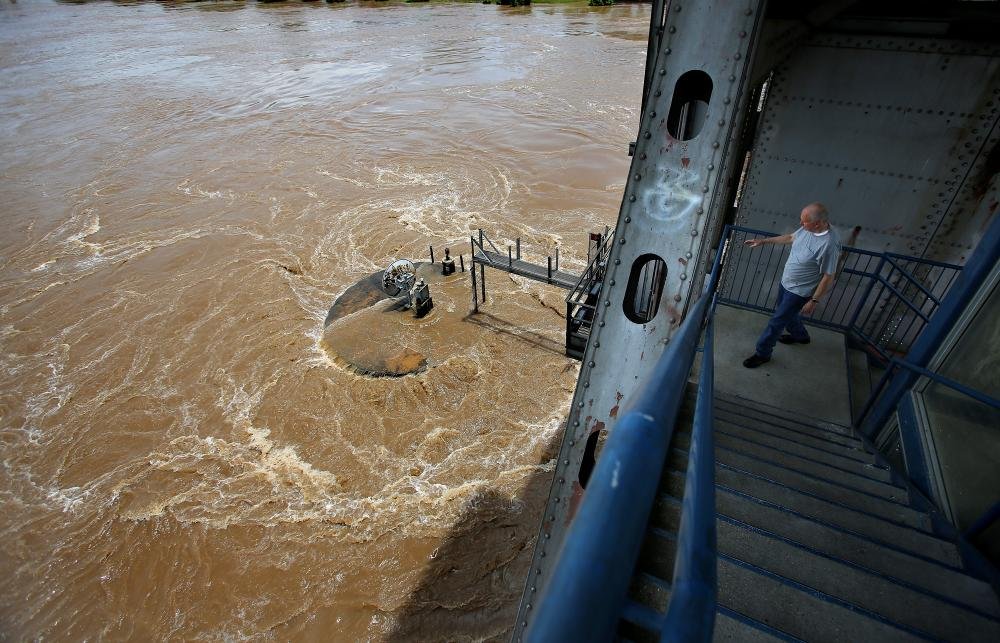 Forest Kessinger watches the water from the Arkansas River rush under the Junction Bridge on Sunday in Little Rock. More photos are available at arkansasonline.com/63flooding/

The National Weather Service has rain chances for central Arkansas at 30% for the first part of the week, increasing to 70% on Wednesday and Thursday before tapering off during the weekend.

Complicating the weather picture over the next seven to 10 days, he said, is a tropical system developing in the Yucatan Peninsula that will draw moisture into the atmosphere over Texas, Oklahoma, Louisiana, and Arkansas, prompting a prediction of above-average rainfall for the period.

Also Sunday, emergency management officials from the affected counties weighed in on conditions in their counties.

Travis Cooper with the Sebastian County office of emergency management reported that river levels were beginning to fall slowly.

"It's not rapidly going down by no means, but it is going down," Cooper said. "We're taking the precautionary action of not allowing people to go in to start cleaning up because we know that the rainfall is going to be coming in."

Crawford County emergency management Director Brad Thomas reported that water in the county was slowly receding and that the county judge was surveying the county from a helicopter to try to get an idea of the damage.

"We still have a spot on our levee that we're watching very, very closely," Thomas said. "We're not out of the woods yet." 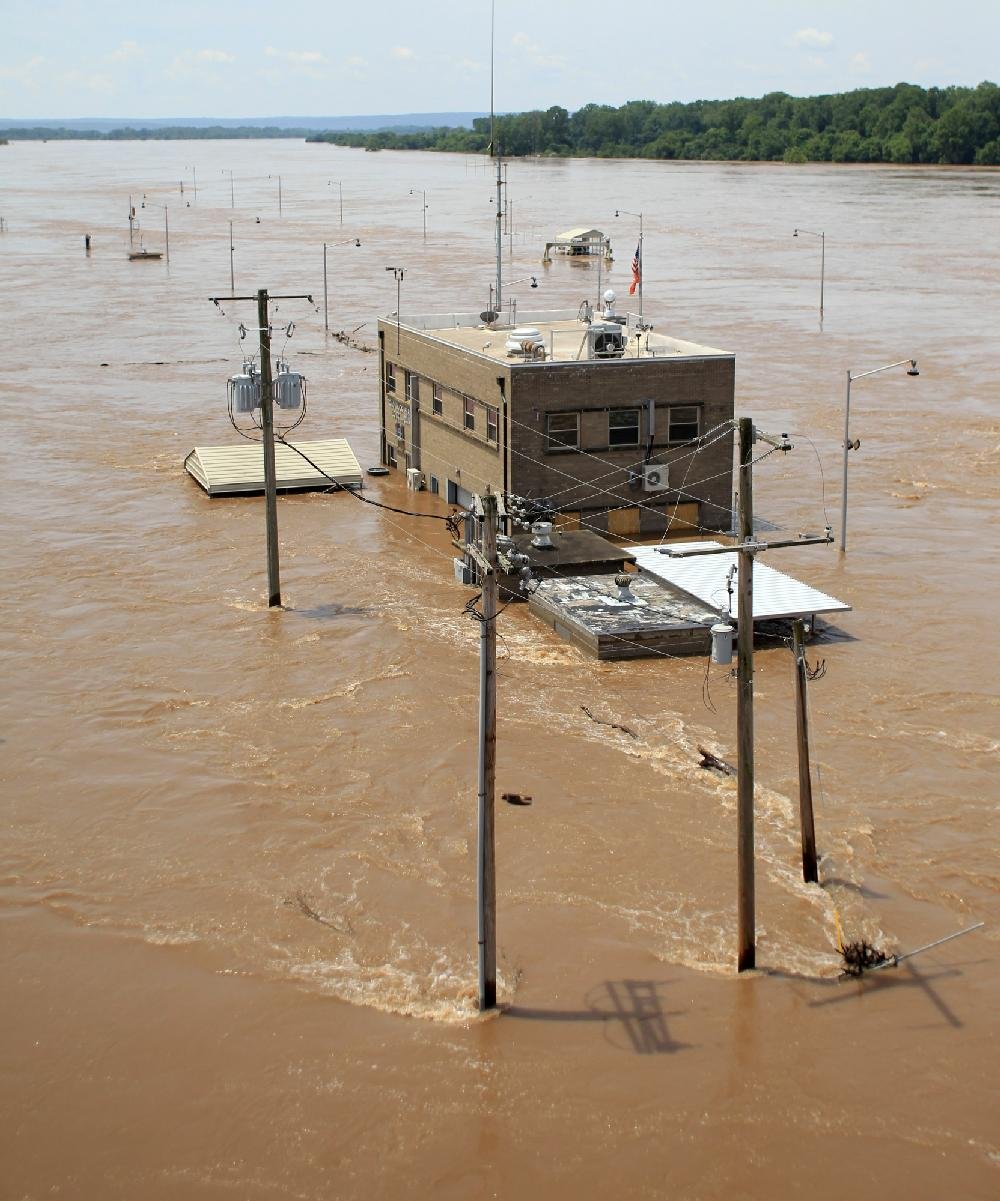 "There's a 300-foot section of county road that is completely wet," said Conway County emergency management Director Jonathan Trafford said. "There's water coming through the levee and so they're checking it every hour."

Faulkner County emergency management Director Shelia Bellot said the county is monitoring its levees that are showing signs of seeping, and is working the Arkansas Department of Game and Fish to monitor the levels around Lake Conway.

David and Rebecca Streett were also checking out water levels in the county Sunday. The Little Rock couple drove in Sunday on a reconnaissance mission of sorts.

"We're looking at a house to buy in Conway and we wanted to come down here to see how bad it really is," said David Streett, who noted that the elevation of the home the two are considering is only a few feet higher than the 285-foot elevation the Arkansas River is forecast to crest there.

Asked if they were rethinking their decision about where to purchase a home, Rebecca Streett laughed.

"If it makes it through this, awesome, I feel pretty secure about the purchase," she said. "If not, I'm glad we found out now."

In Dardanelle, the city's drainage system runs into Smiley Bayou, which was filled by backwater from the Dardanelle Levee breach, Witt said. The bayou's flow points were blocked in an effort to keep back water from the river, but Witt said it may be necessary to unclog those drainage pipes in order to let rainwater out.

Witt and county officials ordered the construction of a temporary levee Saturday along Dardanelle's southern border to slow the rise of the river, but by Sunday the flooding was still around a half-mile from the dirt and gravel structure.

"We expected the water to be here by now," said Natalie Robertson, who with husband Alan was placing plastic sheets along their home's walls. "I feel like this waiting for the flood is going to last forever." 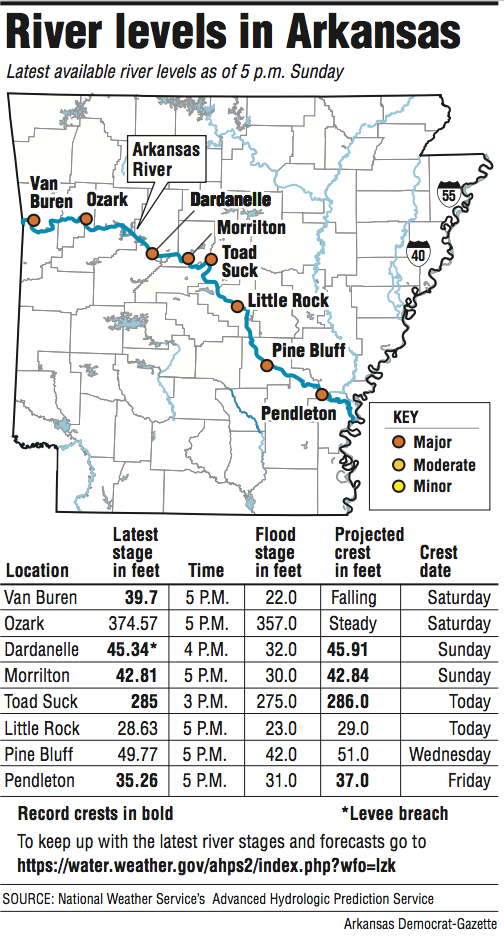 The family began placing sandbags around the house on Wednesday, moved all of their irreplaceable belongings out of the house and backed the bags with plastic around their one-story white home.

"We're about as ready as we're going to get," Alan Robertson said.

Witt stopped by the Robertsons' house early Sunday and told them about the water's slowing while checking to make sure they had enough sandbags and plastic to keep the home safe.

"He's been good about keeping us updated and making sure we know what's going on," Alan Robertson said. "Like I told him this morning, when the water changes, your plan changes."

Burris Inc., an office supply store in Russellville across the Arkansas River from Dardanelle, donated the sandbags and paid its workers to help families set the bags out around their houses, Natalie Robertson said.

"It just shows you that even though they're having their own problems, they care enough to come over and help us," she said.

Witt said he's been thrilled with the number of volunteers pouring in daily to prepare the city. People from as far away as Virginia, Mississippi and the Dakotas joined dozens of local volunteers in preparing the city, he said.

"It's gotten to the point that we ran out of sand, and we had to find something for all the volunteers to help do," Witt said. "They just want to help however they can."