Cubs make up for lost time on road vs. Angels 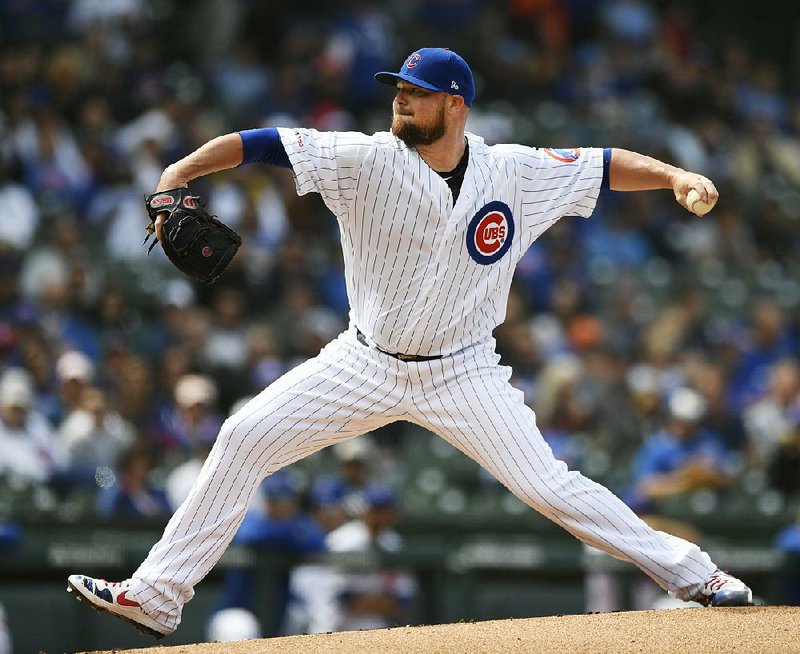 CHICAGO -- The Chicago Cubs sacrificed a day off and got some needed confidence in return.

Jon Lester returned to form, allowing one run in seven innings, and the Cubs' offense came alive in an 8-1 victory over the Los Angeles Angels on Monday.

Coming off three consecutive losses at St. Louis in which they scored six total runs, the Cubs broke loose with a five-run sixth inning. Javier Baez began the onslaught with a run-scoring double, one of his three RBI, as Chicago picked up its third win in its past 11 games.

"Especially when you come off a road trip like that, it's just nice to come home and kind of regroup and show up for work today and get a W," Lester said.

The game was a makeup of a contest scheduled for April 14 that was postponed because of inclement weather. Monday was an open date for both clubs.

Lester (4-4) was in control from the outset. The left-hander allowed 4 singles, walked 1 and struck out 6, giving up his only run on a sacrifice fly by Jonathan Lucroy in the seventh.

Lucroy's drive to the right-center field gap could have done more damage, but right fielder Carlos Gonzalez -- who was promoted from Class AAA Iowa before the game -- made a diving catch on the warning track, nearly sliding headfirst into the ivy-covered wall.

"A huge, huge play in that game," Lester said. "I'm glad he's on our side, I know that. He has been a Cub killer for a long time."

Former Cub Trevor Cahill (2-6) was charged with 5 runs on 6 hits and 2 walks in 4 1/3 innings in relief of opener Cam Bedrosian. Cahill has one win in his past nine appearances.

"Yeah, I've been concerned for a long time," Cahill said. "But all I've got to do is just keep going, working, battling and try to get outs."

The Cubs did their damage in the sixth against Cahill and two other relievers. After Baez doubled to drive in Kris Bryant, Jason Heyward had a two-run double, Addison Russell had a sacrifice fly and Kyle Schwarber singled to drive in a run. It was Chicago's biggest inning since May 17, when it scored five times in the eighth during a 14-6 win over Washington.

Baez and Willson Contreras homered off Luis Garcia in the seventh.

Chicago took a 1-0 lead in the fourth on Baez's groundout.

Gonzalez went 1 for 3 with a walk in addition to his big catch.

"It was better than I expected, but not about my performance," Gonzalez said. "Just being able to wear this uniform and be on the Cubs side is great. I'm looking forward to more days like this."

The 33-year-old hit .210 with 2 home runs, 7 RBI and 33 strikeouts in 30 games with Cleveland before he was designated for assignment May 22. He agreed to a minor-league contract with the Cubs last week and was 2 for 8 with a home run in two games with Iowa. 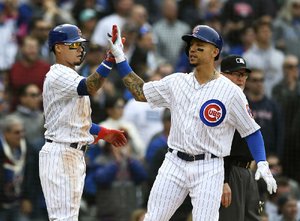 Photo by FR36811 AP
Chicago Cubs' Javier Baez left, celebrates with teammate Carlos Gonzalez right, at home plate after scoring on a Jason Heyward two-RBI double during the sixth inning of a baseball game against the Los Angeles Angels, Monday, June 3, 2019, in Chicago.

Print Headline: Cubs make up for lost time on road vs. Angels