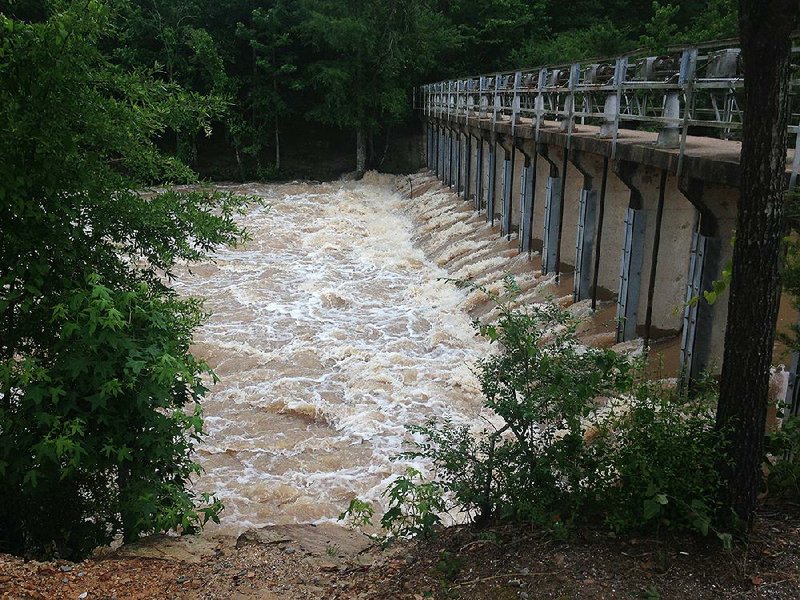 Water roars past the spillway at Lake Conway in Faulkner County on Monday. Authorities issued a flood warning for neighborhoods around the lake.

The National Weather Service issued a flood warning Monday for Lake Conway as water from Palarm Creek overflowed into it, threatening low-lying areas along the lake's 52-mile shoreline.

Areas that have previously flooded near the 6,700-acre lake are those most in danger now.

"If you've ever flooded before, you're about to flood again," Faulkner County attorney and spokesman David Hogue said.

Faulkner County is among a number of counties along the Arkansas River that are dealing with the effects of record-high river levels caused by water released last week from Oklahoma.

Lake Conway runs from the Mayflower area to about 3 miles south of Conway, though those on the Mayflower side of the lake seemed to be in the most danger of water reaching their homes.

Hogue said sandbags are available throughout the town, adding he was confident that residents would take precautions.

"These are people who have lived through the oil spill, two floods" and tornadoes, all in recent years, Hogue said.

In 2014, a tornado ravaged the Mayflower and Vilonia areas. About a year earlier, a crude-oil pipeline ruptured in Mayflower's Northwoods subdivision, forcing residents to evacuate the area. Many never moved back. 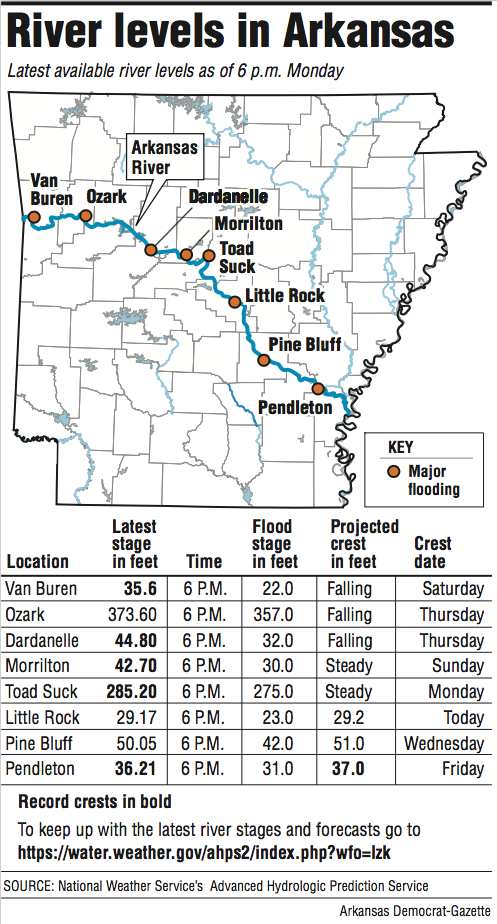 Other areas in the county that already have flooded along Cadron Creek and Lollie Bottoms will see the high water linger for a while, Hogue said.

Keith Stephens, a spokesman for the Arkansas Game and Fish Commission, which built Lake Conway, said he expects it will exceed the flood stage of 266 feet mean sea level by Wednesday. The lake is expected to keep rising after that.

Palarm Creek likely will continue to rise for a few days, "pushing more and more water into Lake Conway," the commission said in a news release. "This is a long-lived event, so the threat of flooding around Lake Conway could extend beyond this week," the news release said.

Stephens said the lake is rising about a foot every 30 hours. The lake was close to 264.4 feet mean sea level Monday; that's 1.4 feet above normal.

Another concern is that 2 to 4 inches of rain could fall in central Arkansas during the latter half of the week.

Hogue and state Rep. Spencer Hawks, R-Conway, encouraged anyone needing assistance to contact the Red Cross, which has set up a shelter at the Don Owen Sports Complex on Lower Ridge Road in Conway.

According to the Faulkner County Office of Emergency Management's website, the Don Owen facility also has 46 recreational vehicle spots available for people who may need to park there during the flood. Electricity and water will be supplied at no cost, though people must first call (501) 327-2532 or email jared.permenter@cityofconway.org or arianne.bradley@cityofconway.org.

Hawks said the Faulkner County Animal Response Team has set up operations behind that facility and will provide care for animals displaced by the flood. That team also can take care of pets for anyone staying at the Don Owen shelter.

At David and Shirley Garrett's home near Lake Conway, floodwaters were already approaching the home where they've lived about 15 years. Since late last week, they've been stacking furniture on top of furniture, sandbagging and even stacking a bed and other furnishings on top of concrete blocks.

In the living room, 72-year-old David Garrett had placed four 4-by-6 lumber pods beneath his piano to protect it from water. His organ is too heavy, but he's planning to dismantle part of it.

Garrett said he and his wife plan to move some of their possessions, such as clothing, to their neighbor's home, which sits on higher ground.

In the past, floodwaters have gotten into the couple's garage but not into their house, which sits about three steps higher, he said. Garrett has done his math, checked the calendar and listened to the warnings. If the water rises as much as projected, he thinks he has until Thursday before it gets into the house.

Despite it all, Garrett said he's optimistic. Bending over slightly, he began playing "Amazing Grace" on his piano.

Rain chances will increase over the next few days, as moisture moves back into the region and several systems move through, said Jim Reynold, meteorologist in charge with the National Weather Service office in Little Rock.

The water isn't expected to have a major effect on the Arkansas River, Reynold said.

"Mostly what is feeding into the river is the rain from Oklahoma," Reynold said. "Also, by the time the storm hits, a lot of the river would have crested and the levels are probably not going to go back up."

Jimmy Hart, county judge of Conway County, said U.S. 64 on the east side of Menifee near the Conway County-Faulkner County line has been closed because of high water. No homes were endangered there, though, since the area is mainly made up of fields, he said.

Hart said Interstate 40 in that area was not a problem and should remain that way "if we don't get 2 or 3 inches up in Cadron Creek."

The good news, he said, is that workers had repaired a malfunctioning drainage pipe in the Arkansas River near Oppelo after working roughly 20 hours a day since Thursday.

Recovery operations have begun farther upriver in Sebastian and Yell counties, according to Melody Daniel, a spokesman for the Arkansas Department of Emergency Management.

The National Weather Service said water levels are beginning to drop in western Arkansas after cresting in Van Buren, Ozark and Dardanelle.

The Arkansas River crested Sunday in Dardanelle at 45.3 feet, one of several record levels along the river's path. Flooding that threatened to inundate parts of the city slowed, easing the immediate risk for many in the Yell County town of about 4,700.

"It's the first time I have been able to mentally relax a little bit," Dardanelle Mayor Jimmy Witt said Monday.

Approximately 20 homes in the county were surrounded by water after a levee broke around 1 a.m. Friday. State highways and county roads have been closed, and some roadways were destroyed by running water.

"It was a constant fight on multiple fronts," Witt said. "We had the river taking over the park and threatening downtown. Then we had the levee breaking, threatening the other side of the city."

County Judge Mark Thone said the past few days have been a challenge.

"The whole crew has had very little sleep, but they are doing everything they can to help," Thone said.

Flooding has hampered tourism in the area that is home to Mount Nebo, Mount Magazine and several lakes.

"We have lost a lot of tourism dollars, and it has disrupted a lot of places," Witt said. "The river is going to stay high for a little while, as well. So fishing-wise this has been great, but for river and lake activities, not so much."

County Judge David Hudson said 545 homes in Sebastian County have been affected by flooding, including 500 in Fort Smith.

Officials have created a donation and distribution center out of the old Sears building in the city.

"A lot of people have come to help and provide support, and our faith-based organizations have risen up and we thank them," Fort Smith Mayor George McGill said Monday at a news conference. "The River Valley is strong."

Water is receding within the city, but City Manager Carl Geffken asked residents to be patient and let authorities assess the damage. He said city officials will meet Wednesday to discuss the debris collection.

Oklahoma Gas and Electric Corp. reported that 415 customers were affected by power failures in Fort Smith.

"As the river descends, it will expose a lot of our equipment," said Rob Ratley, community affairs manager for the company. "It will let us re-energize some areas, but it will be lengthy process."

"Water and electricity don't mix," Deer said. "They can verify the safety aspect."

Desha County is already dealing with flooding, even though the Arkansas River isn't expected to crest until Friday in southeast Arkansas.

"There's some houses flooded," said Rick Terry of the Arkansas Department of Emergency Management. "Of the 65 or 70 houses there on the west side of the bridge, probably 85 percent of them have got water in the house. That water probably varies from just wetting the carpet to 30 or 40 inches in some of the houses."

Terry said the town of Pendleton is situated on the south bank of the river and is intersected by a bridge that takes U.S. 165 across the river. Only one or two houses on the east side of the bridge have taken on water because that portion of the town sits at a higher elevation, he said.

Most towns in the county are well away from the river, Terry said, and the few settlements that are close to it are mostly private property used for hunting.

"There may be a house or two back behind the levee, but most of the ones back there are fairly expensive and they have good, high levees built around them," Terry said.

Meteorologist Sean Clark with the National Weather Service said high water is expected to recede slowly in the area, and the river level is expected to remain above 36 feet for at least a week after it crests.