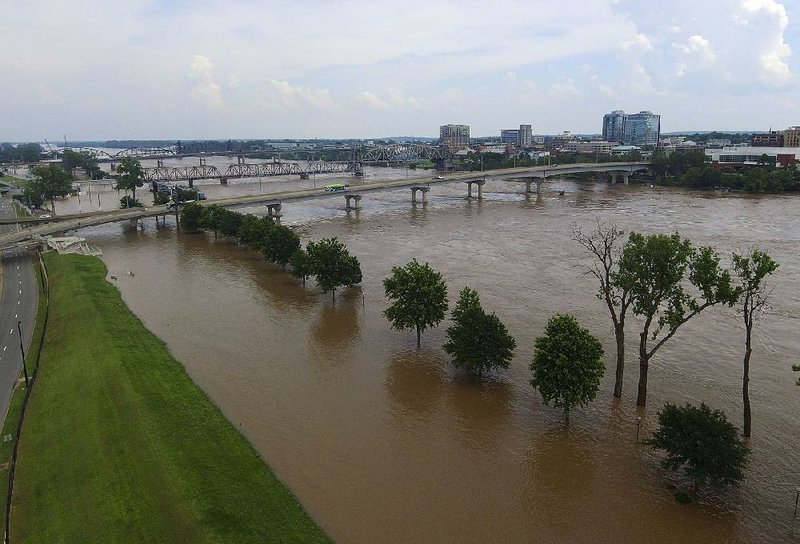 Floodwaters inundated streets and businesses in central Arkansas on Tuesday as weather officials pushed back crest forecasts for the Arkansas River at Little Rock by nearly a day.

Meteorologist Jim Reynolds of the National Weather Service in North Little Rock said Tuesday that the Arkansas River was projected to crest at about 30 feet at 2 a.m. today, slightly higher and later than previous predictions.

Meteorologists are having a hard time pinpointing the flood's projected high-water levels and crest dates because the amount of water flowing downstream is unprecedented, Reynolds said. In record-breaking flooding, there is no way to definitively predict how the water will move, he said.

"We're not exactly in uncharted territory, but we haven't been here often," Reynolds said.

Many communities and business parks in Little Rock and North Little Rock have already experienced damaging water levels, and it's taking a high toll.

"The older people who live here, they can't just start again," said Jessie Clingmon, who was sitting in the shade Tuesday near her East 11th Street home in North Little Rock.

Water had filled the street and risen up many driveways in the area. On nearby streets, flooding had already reached the level of some houses in what Clingmon said was a primarily elderly neighborhood.

"They've put work into these houses for years, and they wanted to live the rest of their lives there," she said. "They can't just start over."

The Arkansas River reached 29.51 feet Tuesday in Little Rock, more than 7 feet above flood stage and higher than the water has been since the 1950s.

When Alvin Crawford went to sleep Monday in his I Street home in North Little Rock, water covered a field behind his house. When he awoke Tuesday, several blocks of the street in front of his house in the Dixie Addition neighborhood were flooded, and water was creeping toward his home.

Crawford, who has lived on I Street for more than 55 years, said he's had to evacuate because of rising water only once before, after a bout of high water in the 1990s. He was getting ready to leave again Tuesday.

Back-flow from the Arkansas River filled a channel around the rear of Dixie Addition, causing flooding on almost every street in the neighborhood.

On H Street, retired U.S. Army Command Sgt. Maj. Jesse Maxwell said he had no intention of leaving, even as water crept up his lawn.

Maxwell moved to the Dixie Addition in 1961 and built his home there 30 years later.

"I used to know everybody who lived here," Maxwell said. "I don't anymore, but it's my home."

Nathan Hamilton, a spokesman for the city of North Little Rock, said police officers were patrolling areas like the Dixie Addition, where floodwaters had risen high enough to endanger property.

"From our perspective, it's kind of been the same as the past three days," Hamilton said. "We know our problem areas."

Hamilton said drainage is the problem in Dixie Addition. Drains in the community were plugged with sandbags to keep backwater from rising higher, and Hamilton said the water has nowhere to go.

"If we get a good rainfall, significant, it will not drain," he said. "That has us concerned. We are watching the forecast like a hawk."

Forecasters are calling for rain almost every day between today and June 11, Reynolds said.

"We have a weak area of low pressure moving in across Arkansas, and that's going to destabilize the atmosphere and bring us widespread rainfall," he said. "That really charges the atmosphere up for strong thunderstorms that will bring heavy rainfall and maybe some large hail. Our main concern though, of course, is the flooding."

For three days now, Hamilton said, public works employees have been pumping out water where they can and keeping an eye on the rising water where a pump would not lower water levels.

In areas like Pike Avenue, Hamilton said water from the Arkansas River is seeping in slowly enough that pumps can keep the floodwaters at bay. In other areas, however, like Willow Beach Road, the river would refill an area as quickly as crews could pump it.

"We could have 100 times the number of pumps in Willow Beach, and it wouldn't make a difference," Hamilton said.

North Little Rock Electric Department business operations manager Jill Ponder said servicemen also have been in the flooded areas cutting power when necessary to protect residents. So far power has been cut to 85 houses, Ponder said, though only 65 of those were occupied at the time the electricity was turned off.

In Little Rock, water inundated businesses near North Cantrell Road and covered the Junior Deputy Sheriffs-Pulaski ball fields. Cajun's Wharf, a longtime eatery on the banks of the Arkansas River, was surrounded on all sides by water. A few people in large trucks and SUVs moved in and out of the submerged parking lots, but most businesses were closed and dark.

Cajun's Wharf owner Mary Beth Ringgold said the restaurant, which announced in April that it planned to close permanently after 44 years of operation, initially planned that its final day would June 1. Then flooding forced it to close early. 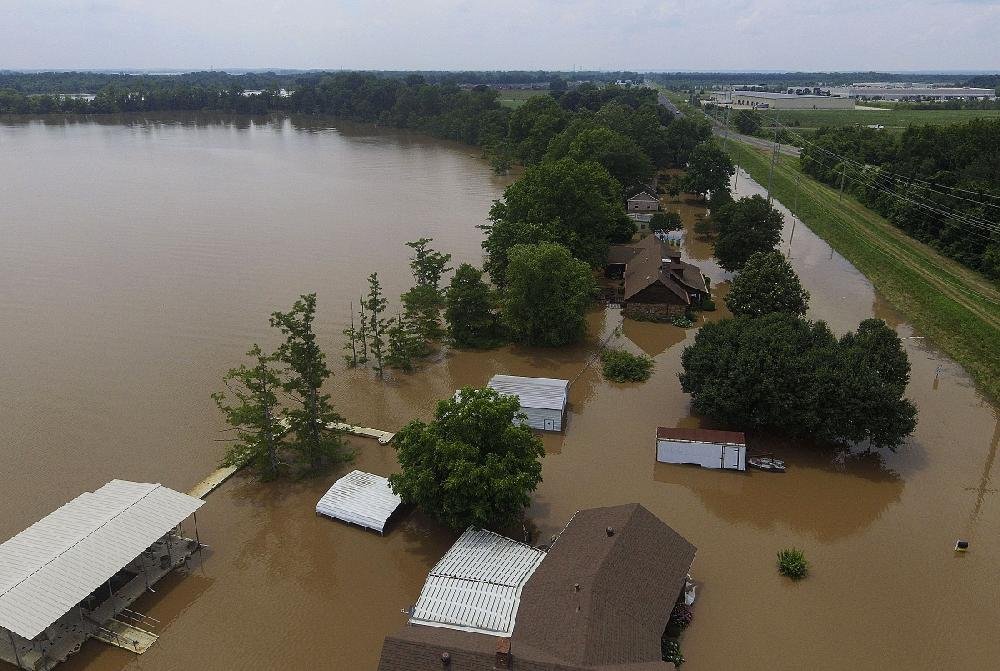 Part of the Willow Beach Road area in North Little Rock has been hard hit by the Arkansas River flooding, as this aerial view Tuesday shows. More photos are available arkansasonline.com/65flood/

"Our main hurdle right now is moving everything out that we need to and then getting these water levels down far enough that we can have the auction," she said. "The restaurant is far enough off the water, it's not really affected."

Little Rock Police Department spokesman officer Eric Barnes said police officers were manning blocked roads Tuesday to keep people from crossing barricades, which has been a problem in recent days. Barnes said there were people swimming in the Arkansas River over the weekend.

"We would like people to respect the barricades. They're up for people's safety," Barnes said. "We're telling people not to get themselves in danger."

Near 36th and Crutcher streets in North Little Rock, where flooding had inundated multiple businesses and moved toward homes, Phyllis Ingles said sightseers are leaving cars parked in the roadway and then crossing barricades on foot.

"If we had an emergency, an ambulance couldn't get to us," Ingles said. "I'm sorry for the people affected, and I pray for them every day, but I have to live here and this is a safety hazard." 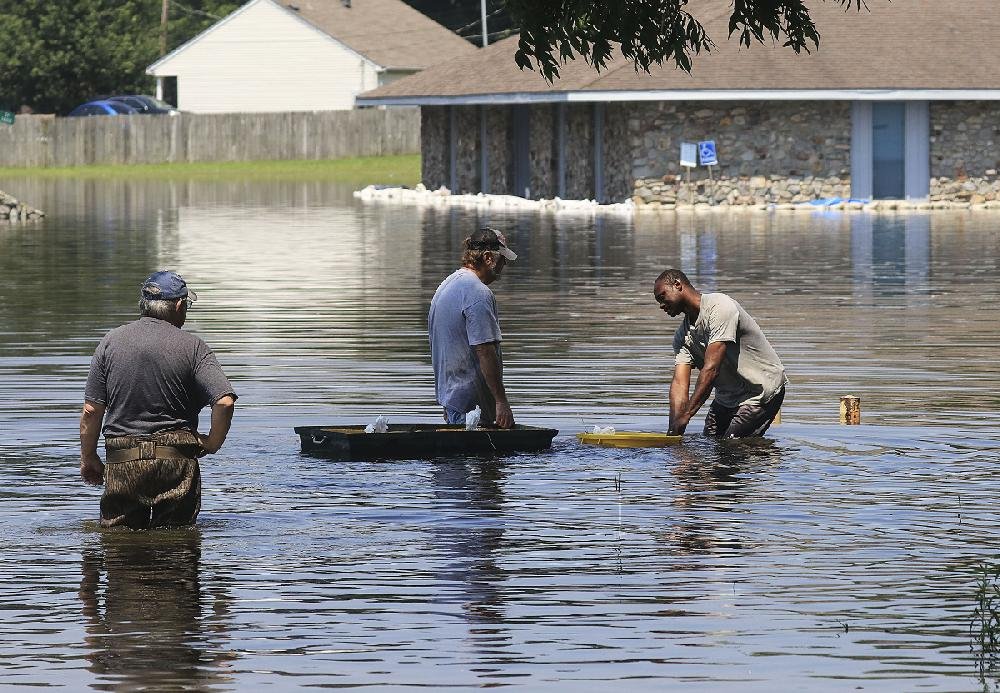 Conway Mayor Bart Castleberry sought to halt frightening rumors Tuesday while standing near a portion of the Lollie Bottoms levee south of the city's municipal airport.

"The rumor went out this morning that the levee had breached. That is incorrect. That is false. The levee has not breached," Castleberry said in a video posted on Facebook.

Castleberry said "a small area of concern was noted" during a routine inspection of the levee earlier Tuesday. Workers from the city, Faulkner County and the state, along with the National Guard and the U.S. Army Corps of Engineers, were working to correct the problem, he said.

"We have been monitoring the levee 24-7," the mayor said. "We are going to continue to do that."

Faulkner County attorney and spokesman David Hogue said late Tuesday that while the levee has "a little erosion," there is still another 20 yards of solid dirt between the water and dry land. 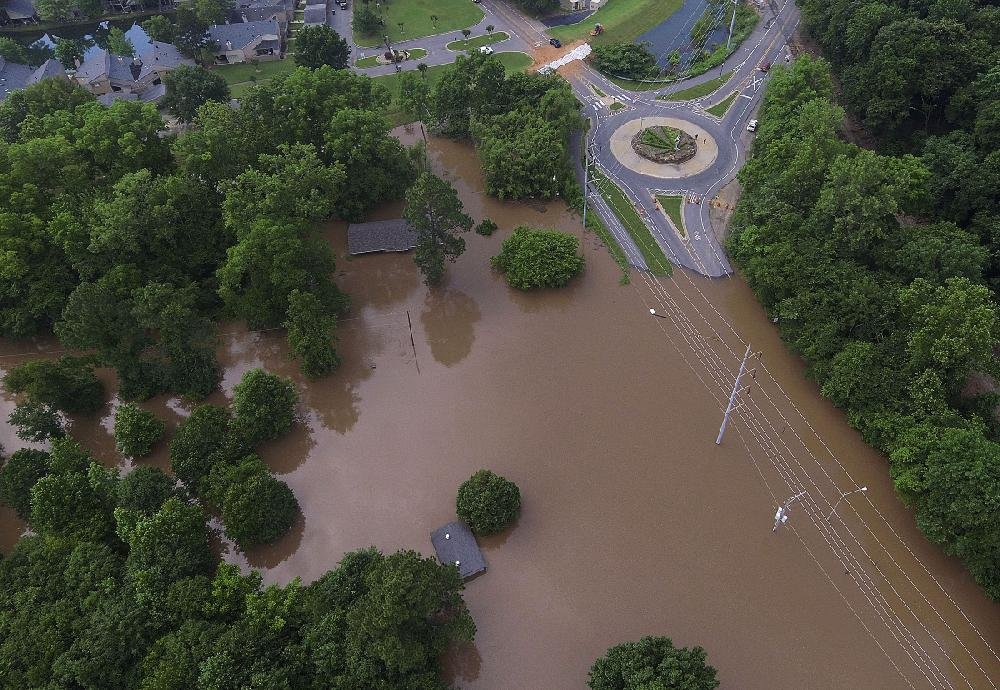 In this file photo Arkansas River floodwaters flow near the roundabout at Rebsamen Park Road and Riverfront Drive in Little Rock on Tuesday afternoon. The road is barricaded to keep out motorists for their own safety.

"I think that we're going to be OK," Hogue said.

Hogue said earlier in the day that Faulkner County was starting to see the beginning of the cleanup stage, except in the Lake Conway area, where residents continued to prepare for more flooding.

Keith Stephens, a spokesman for the Arkansas Game and Fish Commission, which oversees Lake Conway, said the man-made lake rose 5.5 feet above normal in 2011, "the highest it's ever been."

"It could get up to that" level again this year, "especially if we get a significant rain," Stephens said. "It could be higher than that."

Stephens said workers have been monitoring the lake's dam at Mayflower and haven't noticed any damage from the flooded Palarm Creek as it overflows into the lake, which extends from Mayflower to about 3 miles south of Conway.

The National Weather Service has issued a flood warning for low-lying areas near the lake.

Stephens said anyone taking a boat onto the lake should "make sure they watch out for debris" and not go too fast, causing a wake that could push even more water onto people's property.

Floodwaters already covered a small portion of Shoreline Drive, a small, low-lying road off Arkansas 89 in Mayflower, and was creeping toward houses Tuesday afternoon. Just yards from the neat lawn and home of Garry and Rose Moore, a family of ducks swam by as a small piece of wood served as a makeshift raft for four small turtles. 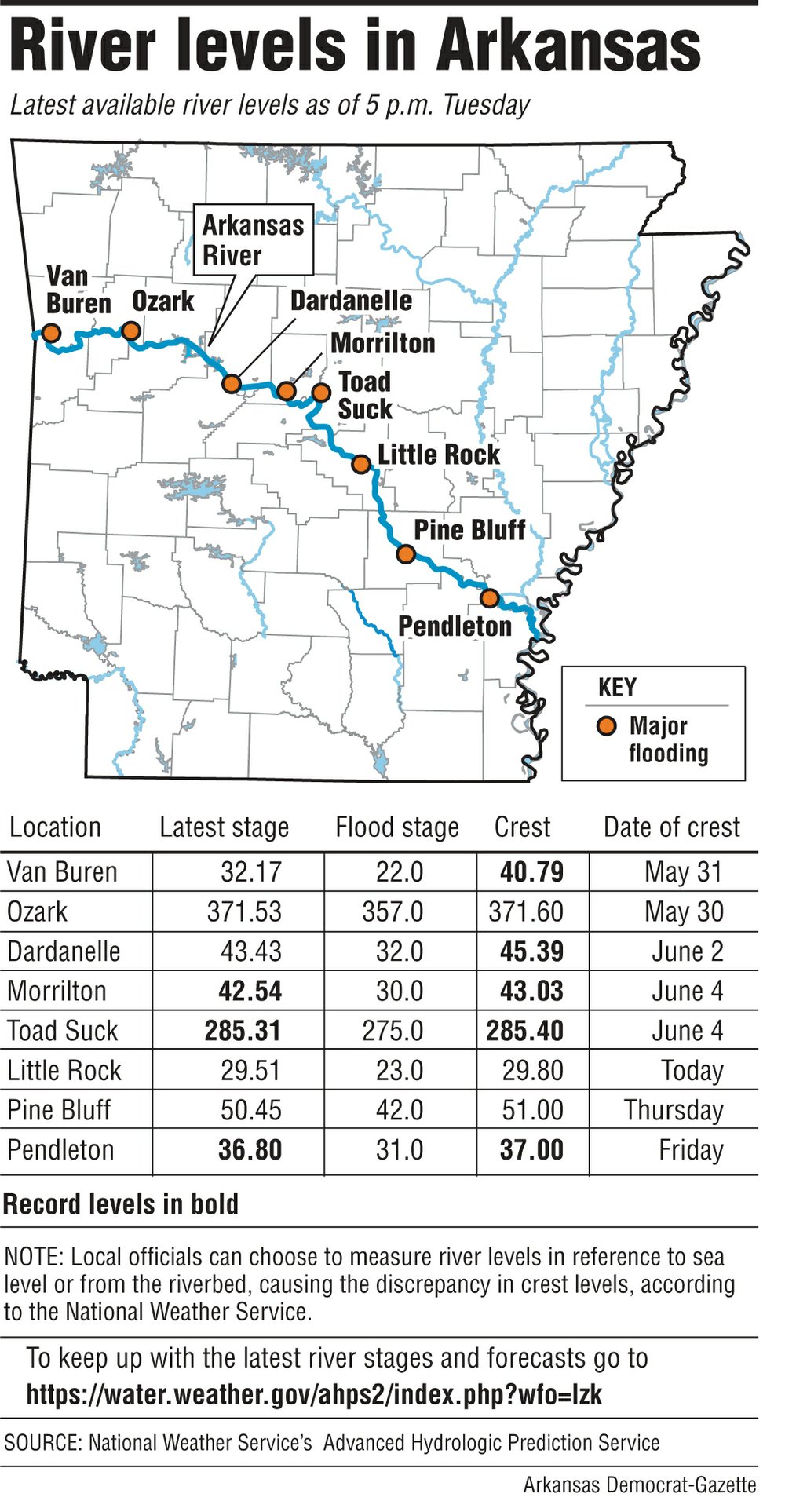 Standing outside his home, 73-year-old Garry Moore said he didn't think the sandbags in place at that point or additional ones he was awaiting would adequately protect the house he built 33 years ago. Water has never gotten into it before.

"This is the worst in 33 years," he said as the sun beamed down.

Robert Herring and his wife, Beverly, live in a mobile home that has been converted into a house along Arkansas 89. Robert Herring, 59, said they had moved in last July and that water had never flooded the home before, though it had gotten into a large shop he has a few yards away.

He hasn't sandbagged and didn't plan to do so.

So, he said, he and his wife were preparing to leave instead and spend some time in a motel.

"The necessities are all we're going to take out," he said. "Necessities and prescriptions."

Information for this article was contributed by Debra Hale Shelton of the Arkansas Democrat-Gazette.

CORRECTION: Nathan Hamilton is a spokesman for the city of North Little Rock. An earlier version of this article misidentified his last name.