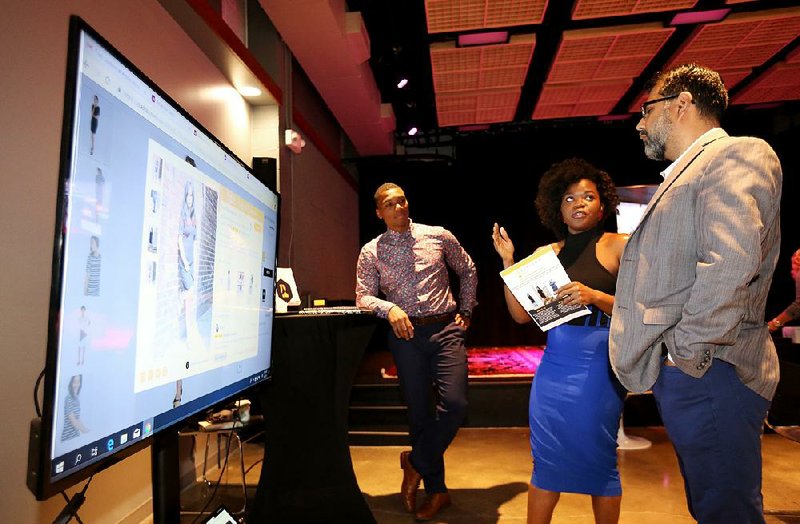 Gerald Mitchell (from left) listens Tuesday as Oluwatope Mitchell of Reflekt Me talks to Ashish Bahara about her startup during the introduction of the Anchor mixed-use co-working space in Fayetteville.

FAYETTEVILLE -- Plans are in the works for a mixed-use co-working space and event center to fill a spot at the Northwest Arkansas Mall that once held a Sears department store.

Where shoppers tried on clothing will be a space for people working remotely, and an event venue will go in at a spot where cars once got new tires, according to plans for the 55,000-square-foot space called Anchor, almost the size of a football field.

Also in the mix is a conference center, private office space and meeting rooms, a coffee shop and an innovation center for startups to showcase their products like artists would in a gallery.

The idea is that the space can be used by all types of businesses and organizations, not just startups, said Becca Shaddox, founder and chief executive officer of Anchor. Freelancers, remote workers or businesses could choose to work on their own projects, collaborate or seek out technological help from startups at the innovation center.

Anchor and i2i Labs, a Rogers startup that connects technology startups with major retailers like Walmart, recently developed the idea as an event center, retail and co-working space hybrid and later pitched it to the leaseholders as a way to also drive foot traffic to the mall.

"It's just a really great space," she said. "There's lots of parking, and large stores are available."

Anchor's business model relies on several revenue streams, including membership fees for the co-working spaces and private offices. Revenue also will come from coffee bar and retail pop-up leases and conferences and events held throughout the year, plans show. Anchor already has commitments from the University of Arkansas, Fayetteville to use the space for future events, and customers interested in the co-working space.

Sears, once the nation's largest retailer, saw sales start to slow because of skyrocketing inflation in the 1970s, and it lost market share to low-price retailers such as Target, Kmart and Walmart. The bankrupt company has closed hundreds of stores across the country, including in Little Rock, Jonesboro, Fort Smith and Fayetteville.

Shaddox said Anchor is leasing a portion of the store space from a wealth management firm in Tulsa. She did not disclose specifics on the lease or how much projected membership fees would cost. Anchor plans to open in 2020.

A similar workspace operator, WeWork of New York, plans to build a 200,000 square-foot building in downtown Bentonville. It has a 2020 groundbreaking date.

As Benton County undergoes commercial renovations, Shaddox also saw Fayetteville as prime for repurposing. "We also see a tremendous value in utilizing an existing structure rather than building from the ground up," she said.

Shopping malls are suffering nationwide as retail stores battle the disruption created by online shopping. Numbers have not been good lately for mall-housed retailers such as Abercrombie & Fitch and Gap Inc., with each reporting quarterly losses and plans to restructure or close stores.

"Consumers increasingly prefer not just to shop for apparel when they go to the mall -- they want to spend the day doing a variety of activities," she said.

"Creative plans like this can revitalize a mall," Cegielski said. "This sounds like a property that is strategically adapting to ensure economic vitality rather than letting the land sit empty."

Anchor was recently founded by Shaddox, who also does philanthropic work for Walmart and outreach with children interested in science, math and technology fields. Amy Bates, of Bates Events, and i2i Labs co-founders Trent Carrender and Bryce Paden also work for Anchor.

Representatives from several U.S. startup companies gathered Tuesday at Sunrise Studio in Fayetteville, a display of the type of companies -- including retail, health care and technology -- that Anchor's innovation lab hopes to attract. All told their company stories and showcased their products with interactive displays.

They also expressed enthusiasm for a space like Anchor in Fayetteville. The designs for the business show a modern space with colorful chairs, high ceilings, and open seating.

Anchor will offer a professional work environment and hangout spot for clients or co-workers from out of town, said Oluwatope Mitchell, co-founder and chief executive officer of Reflekt Me, a North Carolina startup that develops a tool for online shoppers to see how each clothing item will look, relative to their size and body type.

She said Fayetteville is only a couple of plane-rides away form Fayetteville, N.C., and looked forward to Anchor's completion.