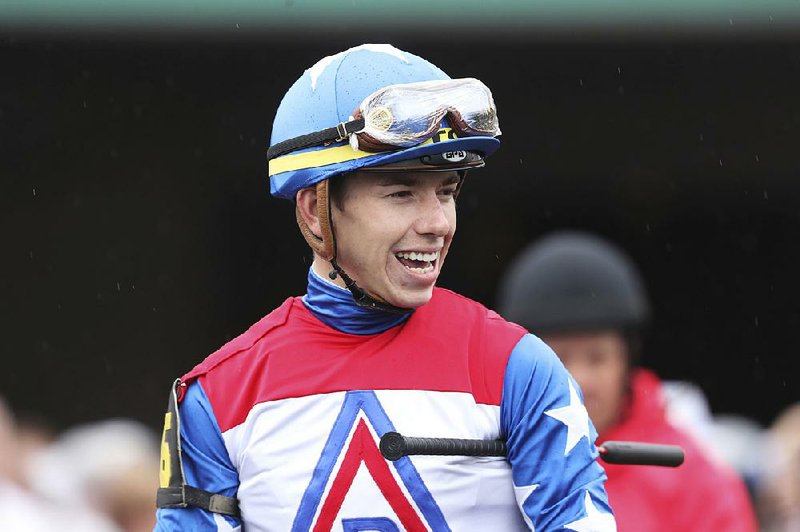 In this May 4, 2019, file photo, jockey Tyler Gaffalione is shown at Churchill Downs in Louisville, Ky. Gaffalione at 24 has become horse racing’s rising star jockey after winning the Preakness and can add to his already impressive resume in the Belmont.

While there may not be a specific moment when people in horse racing realized those jockeys would become all-time greats, Gaffalione has had two that stand out for Bailey: July 4, 2017, when the young rider tied the Hall of Famer's track record with seven victories in a day and May 18, 2019, when he won the Preakness aboard War of Will.

"I think the Preakness will probably be a defining mark in this young man's career," Bailey said.

It's early in a career that's reaching a crescendo for Gaffalione, 24. The 2015 champion apprentice rider gets another chance to add to his resume when he rides War of Will in the Belmont on Saturday.

Gaffalione is third generation in the profession after grandfather Bobby rode more than 3,200 times and father Steve won more than 800 races over 20 years. As a child, Tyler straddled the armchair of the couch to simulate riding a racehorse.

"I call Tyler the next Johnny Velazquez," trainer Mark Casse said. "He's an extremely good athlete. I think he can do a little bit of anything. He's good on front end, he's good from coming out, he's an extremely, extremely strong finisher. And for a young rider, he does a lot of thinking, which is good."

With his family connection to the sport, Gaffalione fell in love with horses while growing up in Davie, Fla. His first time on a horse was at the Ocala tracks Cardinal Hill and Classic Mile when he was 11. He begged his dad to let him ride for real and a year or two later he did.

At age 20, Gaffalione won what amounts to the Eclipse Award's rookie of the year honors when he won 217 races and over $5.8 million in earnings in 2015 facing tough competition at Gulfstream Park.

"Mentally I'm so much stronger than I used to be," Gaffalione said. "I used to let things get to me when I'd lose races. I would get a little bummed out. ... I just always expected so much more of myself and I wanted to be the best rider possible. I have a lot more confidence in my decision-making, a lot more patience I would say and I think it helped tremendously. But I've had great support around me."

Gaffalione faced a huge test in the aftermath of the historic Kentucky Derby disqualification of Maximum Security for interfering with War of Will. While Gaffalione likely avoided what could've been a catastrophic pileup, Maximum Security's owner Gary West blamed Gaffalione for his role in the first in-race DQ in the 145-year history of the Run for the Roses.

Gaffalione built up a thick skin and also earned a lot of professional respect from Bailey, who's now an analyst for NBC Sports. Bailey congratulated Gaffalione on social media when he tied his wins record and shared some advice when they ran into each other at the track a few years back.

"I made a couple of suggestions to him just generally, not riding races per se, but just philosophically about the ascension and the timeline of his career and kind of where I thought his place was," Bailey said. "I told him I thought he belonged in New York. I believed that then. I believe it now."

Keeping his horse relaxed like in the Preakness is what Gaffalione considers the biggest key to the Belmont, which is the longest of the Triple Crown races at a mile and a half over the massive track known as "Big Sandy." Because he predominantly rides in Kentucky, Gaffalione hasn't been in a race at Belmont Park since Oct. 13.

Gaffalione is set to embrace the challenge. There's no place he would rather be than riding a thoroughbred.