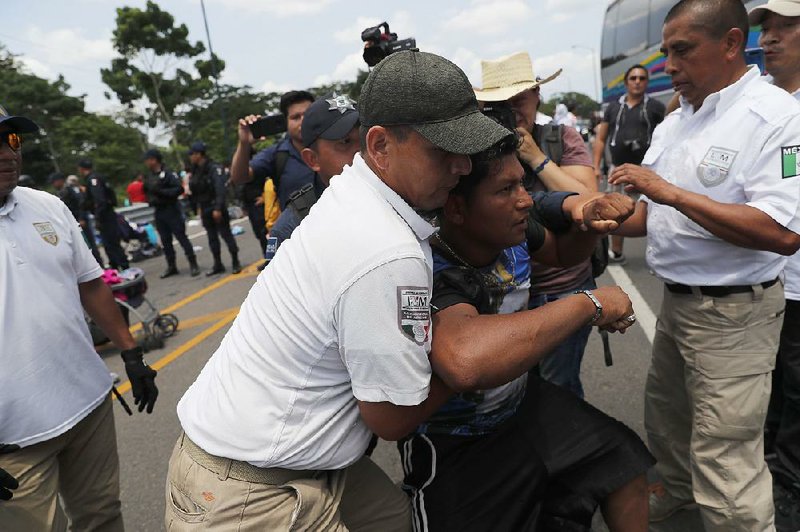 Mexican immigration authorities detain a migrant Wednesday near Metapa in Chiapas state during a raid on a caravan that had crossed the Guatemalan border earlier in the day.

WASHINGTON -- White House and Mexican government officials met Wednesday in an attempt to reach a deal to halt or delay President Donald Trump's plan to impose tariffs on about $350 billion in imports.

The two sides are to continue their discussions today, with Trump confirming in a Twitter post that tariffs will go into effect next week unless he is satisfied Mexico has done enough to stem a surge of migrants.

"Immigration discussions at the White House with representatives of Mexico have ended for the day. Progress is being made, but not nearly enough!" Trump tweeted. "If no agreement is reached, Tariffs at the 5% level will begin on Monday, with monthly increases as per schedule."

With time running out before the first set of tariffs is scheduled to go into effect, Vice President Mike Pence met for two hours with Mexican Foreign Minister Marcelo Ebrard at the White House.

White House officials described the meeting between Pence and Ebrard as productive and said Mexican officials suggested a number of helpful changes.

Ebrard said the two sides did not discuss tariffs at the meeting.

"The dialogue was focused on migration and what Mexico is proposing to the United States," he said at a news conference. "We're concerned about the Central American situation right now."

Ebrard characterized the meeting as cordial, and he said both U.S. and Mexican negotiators had a chance to lay out their positions. He said the U.S. position did not differ from what officials have said publicly.

"We are optimistic," he said.

Earlier Wednesday, White House trade adviser Peter Navarro said on CNN that there were commitments Mexico could make to avoid the tariffs, which he said "may not have to go into effect precisely because we have the Mexicans' attention."

In a separate interview with Bloomberg TV, Navarro said the move on Mexico was partly intended to force the hand of Congress to deal with border-security after lawmakers repeatedly failed to act.

Trump has increasingly relied on import taxes to try to force other nations to bend to his will, dismissing warnings, including from Republicans, about the likely effects on American manufacturers and consumers.

Trump's goal in this case is to persuade Mexican leaders to do more to keep would-be migrants from other Central American countries from traveling across Mexico to the American border.

The U.S. Border Patrol's apprehensions of people at the border hit the highest level in more than a decade in May: 132,887 apprehensions, including a record 84,542 adults and children together, 36,838 single adults and 11,507 children traveling alone.

Most are from Guatemala, Honduras and El Salvador, countries wracked by gangs, violence and poverty. Many of the travelers are expected to eventually request asylum.

President Andres Manuel Lopez Obrador has said he was "optimistic" that "we will reach an accord before the 10th of June," when the first round of penalties would be imposed.

Administration officials have said Mexico can prevent the tariffs by securing its southern border with Guatemala, cracking down on criminal smuggling organizations and entering into a "safe third country agreement" that would make it difficult for those who enter Mexico from other countries to claim asylum in the U.S.

The U.S., however, has not proposed any concrete benchmarks or metrics to assess whether the U.S. ally is sufficiently stemming the migrant flow from Central America.

While some have suggested the president, who is currently traveling in Europe, is not serious about going through with his threat, he insisted in a tweet Tuesday that he was not "bluffing."

The issue has allied Mexico's government with influential sectors in the U.S. who say the tariffs would damage both nations, whose economies are intertwined. Most of Mexico's exports go to the U.S., and Mexico is the United States' top trading partner.

Tom Donohue, president of the U.S. Chamber of Commerce, visited the Mexican Embassy on Tuesday and was expected to meet top Mexican businessmen this week. The chamber said recently that it was considering legal action to block the tariffs from going into effect.

"These tariffs will be paid by American families and businesses without doing a thing to solve the very real problems at the border," said Neil Bradley, the chamber's executive vice president.

Meanwhile, Republicans in Congress have been threatening a rare confrontation with Trump, warning the White House on Tuesday that they are ready to stand up to the president to try to block his tariffs, which they worry would spike U.S. consumer costs, harm the economy and imperil a major pending U.S.-Mexico-Canada trade deal.

Senate Majority Leader Mitch McConnell said Tuesday, "There is not much support in my conference for tariffs, that's for sure."

"Deep concern and resistance," is how Sen. Ted Cruz of Texas characterized the mood.

House Speaker Nancy Pelosi, a California Democrat, warned Wednesday that the proposed tariffs, which could eventually rise to 25%, would be "punishing" for both the U.S. and Mexico.

Analysts were not optimistic that the initial phase of tariffs could be avoided.

"Trump has got his new tool and he wants to use it and he will use it, not just because he can. He will use it because it's part of his negotiation tactics," said Duncan Wood, director of the Mexico Institute at the Wilson Center think tank in Washington.

"Mexico will offer to do a lot more on migration, but they will also say that they will retaliate against tariffs and a lot of people are going to lose a lot of money," he said.

The economic stakes are enormous. The 25-year-old North American Free Trade Agreement made trade with Mexico largely duty free. As a result, manufacturers have built up complicated supply chains that straddle the border. Americans bought $378 billion worth of Mexican imports last year, led by cars and auto parts.

The back-and-forth could imperil the NAFTA revamp, which Mexico and Canada agreed to last year. The U.S.-Mexico-Canada Agreement has been signed by all three countries but must be approved by their legislatures.

Trump, speaking to reporters in Ireland on Wednesday, said he thinks Mexican officials "want to make a deal" and said he would know more after the meeting.

"Mexico can stop it. They have to stop it. Otherwise we just won't be able to do business," he said. "It's a very simple thing."

As talks began Wednesday, some 200 Mexican military police, immigration agents and federal police blocked the advance of about 1,000 Central Americans who were walking north along a southern Mexico highway.

The group, including many women and children, set out early from Ciudad Hidalgo at the Mexico-Guatemala border and was headed for Tapachula, the principal city in the region. State and local police accompanied the caravan.

The officials blocked the highway near the community of Metapa, about 11 miles from Tapachula.

An immigration official at the site who was not authorized to speak publicly said the migrants would initially be taken to an immigration detention center in Tapachula. It appeared 600 to 800 migrants were being transported.

In recent months Mexico has used raids and roadside checkpoints to discourage highway marches such as the caravans that occurred in 2018 and early this year.

The migrants say they aim to reach the U.S. border, where many plan to request asylum.

Last year, migrants began travelling from Central America in large caravans that grew as they advanced through southern Mexico, drawing Trump's ire. The caravans offer migrants a relatively safe way to travel and are far less expensive than hiring smugglers.

The first caravans were warmly received in southern Mexico towns, but as they continued, towns complained they did not have the resources to continue to feed and care for them.

Many of the migrants say they're fleeing gang violence, oppressive extortion and corruption in Guatemala, Honduras and El Salvador. But a devastating drought is also gripping parts of the region and devastating farm families.

Mexico has responded by offering more options to stay legally on its territory, but most still have the ultimate goal of arriving in the U.S., where they can earn better pay and in many cases reunite with relatives. 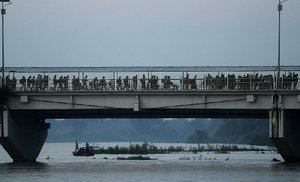 Photo by AP/MARCO UGARTE
Hundreds of Central American migrants cross a bridge Wednesday over the Suchiate River at the border between Guatemala and Mexico. 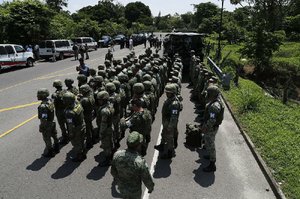 Photo by AP/MARCO UGARTE
Mexican military police officers get in formation Wednesday on a highway in Metapa in Mexico’s Chiapas state as authorities prepare to intercept a caravan of migrants moving in from Guatemala.