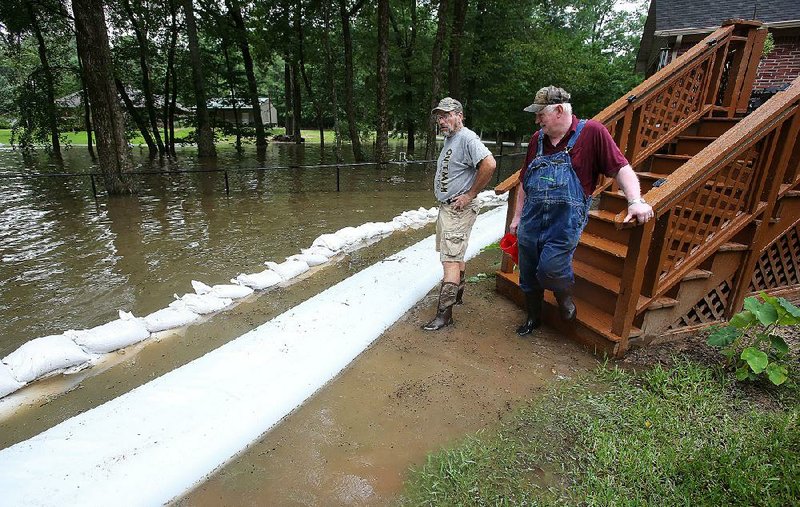 David Binz (right) and his son-in-law, David Woodall of Quitman, check the sandbag wall Thursday around Binz’s home on Lake Conway in Mayflower. Water was seeping toward the house. “I’ve done everything I can, all I can do is wait now,” Binz said. More photos are available at arkansasonline.com/67flooding/

Deterioration of a levee late Thursday in Faulkner County led Conway officials to recommend the evacuation of residents in the Lollie Bottoms area.

Conway city spokesman Bobby M. Kelly III said about 9:45 p.m. that officials monitoring Lollie Levee -- which was under 24-hour observation -- had reported additional deterioration of the structure that could lead to a breach at any time.

Conway sent out a message on Twitter warning residents in the area that the levee had deteriorated and that the Conway Fire Department and the U.S. Army Corps of Engineers recommended evacuation.

"I think possibly a big piece of debris collided with the repairs we were making, but there's so much force behind that water that it could have just been regular deterioration," Kelly said.

Alerts were issued by radio, phone notifications and the National Weather Service to people living in or near Lollie Bottoms, Kelly said.

The structure had developed a "higher risk" after the inner wall began to "slough off" and get carried downstream, said County Judge Jim Baker.

"The levee is still holding," Baker said at 10 p.m. "We evacuated the area as a safety precaution. The levee is not breaking, but it may break. We have some confidence that it won't."

Baker said it's a race against time. As water from the Arkansas River recedes, the river level will lower to a point where the levee is stronger but the speed of the floodwaters remained a concern.

The area is sparsely populated, and many of those who live there are families, officials said.

"Four homes are at risk," Baker said. "There was only one home that was populated at the moment. Everyone else had already left the area before the alert had been sent out."

"There is also a very little risk to west Conway, but it's 8 to 10 miles away from the Lollie Bottoms area," the county judge said.

Conway Mayor Bart Castleberry, the city's Fire Department, the Faulkner County Fire Department and the Corps of Engineers continued to monitor the situation at the levee late Thursday, Baker said.

Castleberry said in a video posted Wednesday on social media that part of the Lollie Levee had begun to erode and that efforts were underway to shore it up.

"We are not out of the woods with the levee, but our confidence level is better [Wednesday] after all the work that was done," Castleberry said in the video. 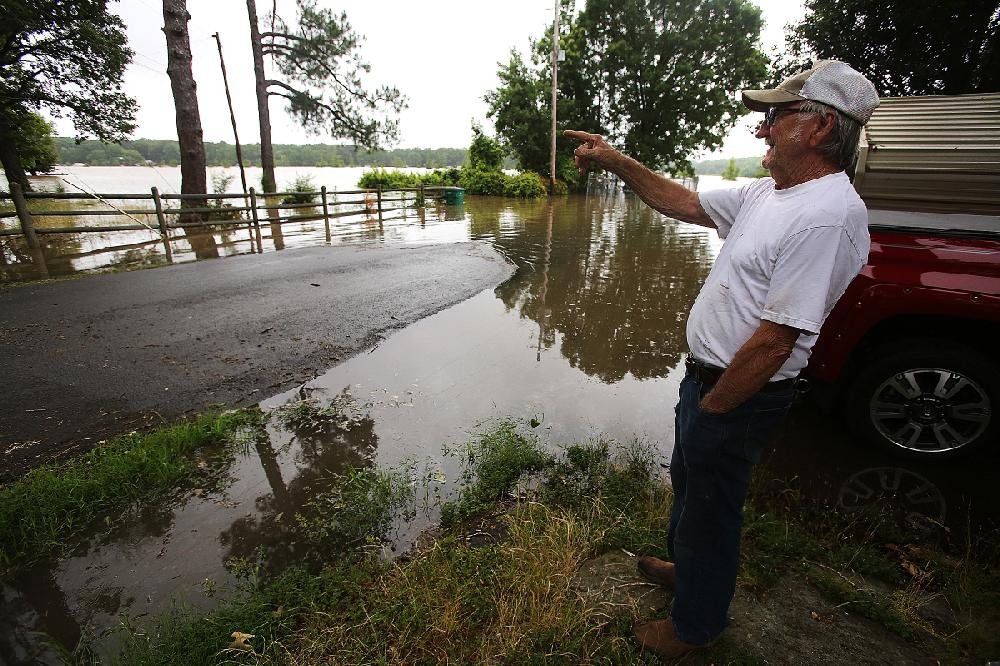 Bud Newby watches Lake Conway rise Thursday toward the backyard of his home in Mayflower. Faulkner County’s County Judge Jim Baker said the lake level, already more than 4 feet above normal, was expected to rise at least another foot. More photos are available at arkansasonline.com/67flooding/

Storms in central Arkansas prompted the weather service to issue flash-flood warnings in and around Little Rock and in east-central Pulaski County, as well as southern Lonoke County and northeastern Jefferson County. The warning was in effect until midnight.

Titus said more rain and possible thunderstorms are expected for most of Arkansas before the low-pressure system moves eastward Saturday.

The weather service's hazardous-weather outlook said it would not take much rain to cause flash flooding in communities near the saturated Arkansas River and in flooded areas.

A thunderstorm with heavy rain caused at least one vehicle to slide off Hensley Road in Pulaski County on Thursday night. The vehicle ended up in a ditch, where it became submerged, according to Pulaski County sheriff's office spokesman Lt. Cody Burk.

No one else was in the vehicle when it submerged. Burk said officials were barricading the flooded roadway late Thursday.

Corps of Engineers officials said Thursday afternoon that floodwaters from the Arkansas River were going down in some parts of the state and the river's flow was slowing.

The Arkansas River in Pine Bluff was forecast to crest at 51 feet Thursday night and is expected to crest at 38 feet Saturday in Pendleton, according to the weather service.

"We can see the light at the end of the tunnel, but we got to get this water past Pine Bluff and Pendleton and out of here," Driver said.

The Arkansas River at Toad Suck crested at 285.4 feet above sea level Tuesday and has gone down 18 inches since then, but Baker said Thursday afternoon that the water level at Craig D. Campbell Lake Conway Reservoir continued to rise.

"We expect it to rise another foot to 15 inches," he said of the lake.

Lake Conway was almost 4.5 feet above its normal 263 feet mean sea level and rising Thursday afternoon, according to Keith Stephens, a spokesman for the Arkansas Game and Fish Commission, which oversees the lake. 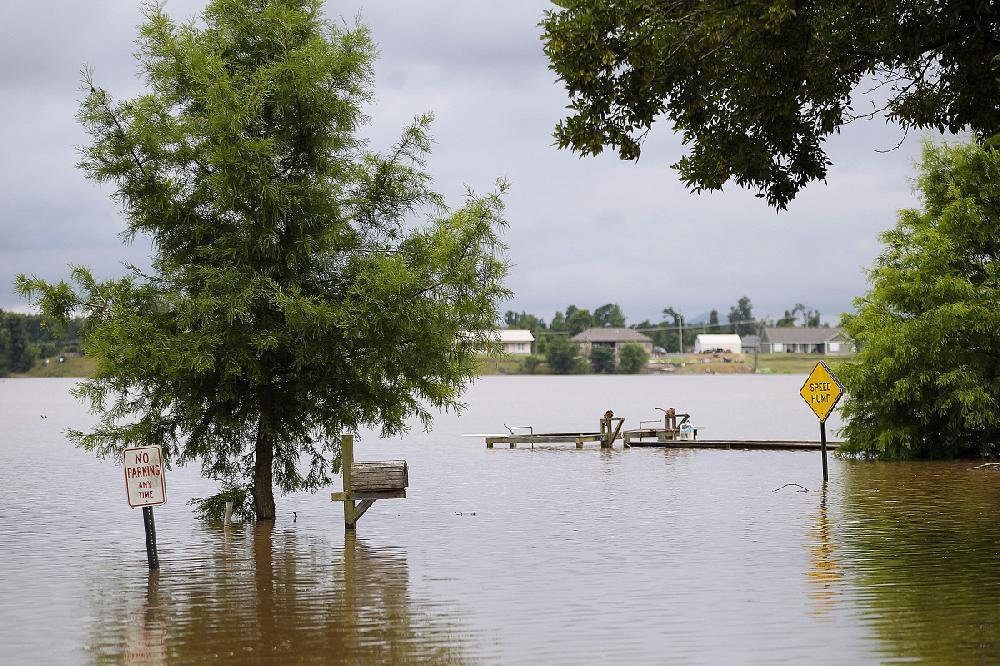 Shoreline Drive on Lake Conway is covered by floodwaters Thursday. Although the Arkansas River is starting to go down at Toad Suck, water continues to drain into the lake for now.

"We are starting to see a slight reduction in how fast it is rising," Stephens said. "It is currently rising about 1 foot every 30 hours."

There wasn't as much of a rise in Palarm Creek over the past two days, and the reduction between the creek level and the lake level has slowed the lake's rise, Stephens said.

"The Arkansas River is falling out some, but we need it to get down to around 283 feet MSL [mean sea level] or below at the Toad Suck Lock and Dam to impact how much higher Lake Conway will rise due to inflow from Palarm Creek," Stephens said.

Central Arkansas could see 1-2 inches of rain by the weekend, according to the National Weather Service. The forecast called for a 70% chance of rain today and a 50% chance Saturday.

Rainfall could cause problems for places like Lake Conway, which has already surpassed flood stage.

"Because the lake is so high and main tributaries are already backed up, any significant rainfall could cause flash flooding in the creeks and increase the lake's water level," Stephens said. "Given current forecasts and conditions, it looks like the lake could rise another foot by [Friday] afternoon if conditions do not change dramatically.

"This would put the lake close to 5.5 feet above normal pool, the highest lake level recorded since the lake was created almost 70 years ago."

North Little Rock officials posted on social media Thursday afternoon that drainage capacity in the city, especially near the river, was strained and that storm water had few places to go.

"Areas of Dixie, Riverfront, Shillcut Bayou, Dark Hollow, and Baucum Pike could see some water level rise," the post said. "No rain is best, light rain is concerning, but threats of heavy storms over a long period are keeping city workers awake at night."

Officials with the National Weather Service's Lower Mississippi River Forecast Center said they began seeing a reduction in the amount of water from the Arkansas River traveling downstream Wednesday.

"This is likely due to water seeping into off-channel storage due to overtopping and levee breaches," the agency said in a news release.

Officials said peak flow from the Arkansas River is expected to approach the lower Mississippi River within a few days.

Jeff Graschel, a service coordination hydrologist with the Lower Mississippi River Forecast Center, said floodwaters from the Arkansas River are expected to cause the Mississippi River to rise only a foot or two.

"The channel is so much larger than the Arkansas River that it can take that overflow and only rise a few feet," Graschel said. "The concern would have been if floodwater from the Ohio, Tennessee, St. Louis and Illinois all worked down at the same time.

"The water from Missouri is working down and will probably reach at the same time as Arkansas, but the Ohio and Tennessee aren't contributing."

The Mississippi River isn't expected to get back to normal levels until late July or August, Graschel said.

The influx of water on the Mississippi River will likely cause some back-flow problems below the Pendleton area in southeast Arkansas, Graschel said.

[RELATED: Talk inside shelter is about loss, days ahead]

"There are a lot of storage areas that will back up, and that is also a key to the reason why the Mississippi won't rise too much," Graschel said. "The areas downstream from Pendleton might see some water, but no major cities will be affected.

"Of course, when it's your home that doesn't matter to you."

Some communities along the Arkansas River are in the beginning stages of recovery efforts, but Melody Daniels of the Arkansas Department of Emergency Management said the agency won't shift into full recovery mode until the river crests in every part of the state.

The Arkansas River was receding Thursday in the western part of the state.

The river was at 365.6 feet above sea level Thursday afternoon at Ozark. That's a fraction of a foot above major flood stage and well below the 374.99-feet level it reached May 31.

Despite rain, waters were receding along the river and its back-flows in Yell County, where roads reopened, allowing residents the opportunity to assess the damage.

Gesturing toward the sky, which had dropped less than an inch of rain over 24 hours, Mayor Jimmy Witt said Thursday afternoon that the rain likely would not affect his city.

"If we had gotten this three days ago, we would have flooded from the inside out," Witt said. "There are so many little things like that where if they hadn't happened just the way they did, things would have been a lot worse."

Backwater from a burst levee near Dardanelle had inundated parts of Yell County and threatened to reach the town, but stopped 30 yards short of Dardanelle Middle School, Witt said. Now, as the city moves into the recovery phase, Witt said he has big plans for future flood preparation. 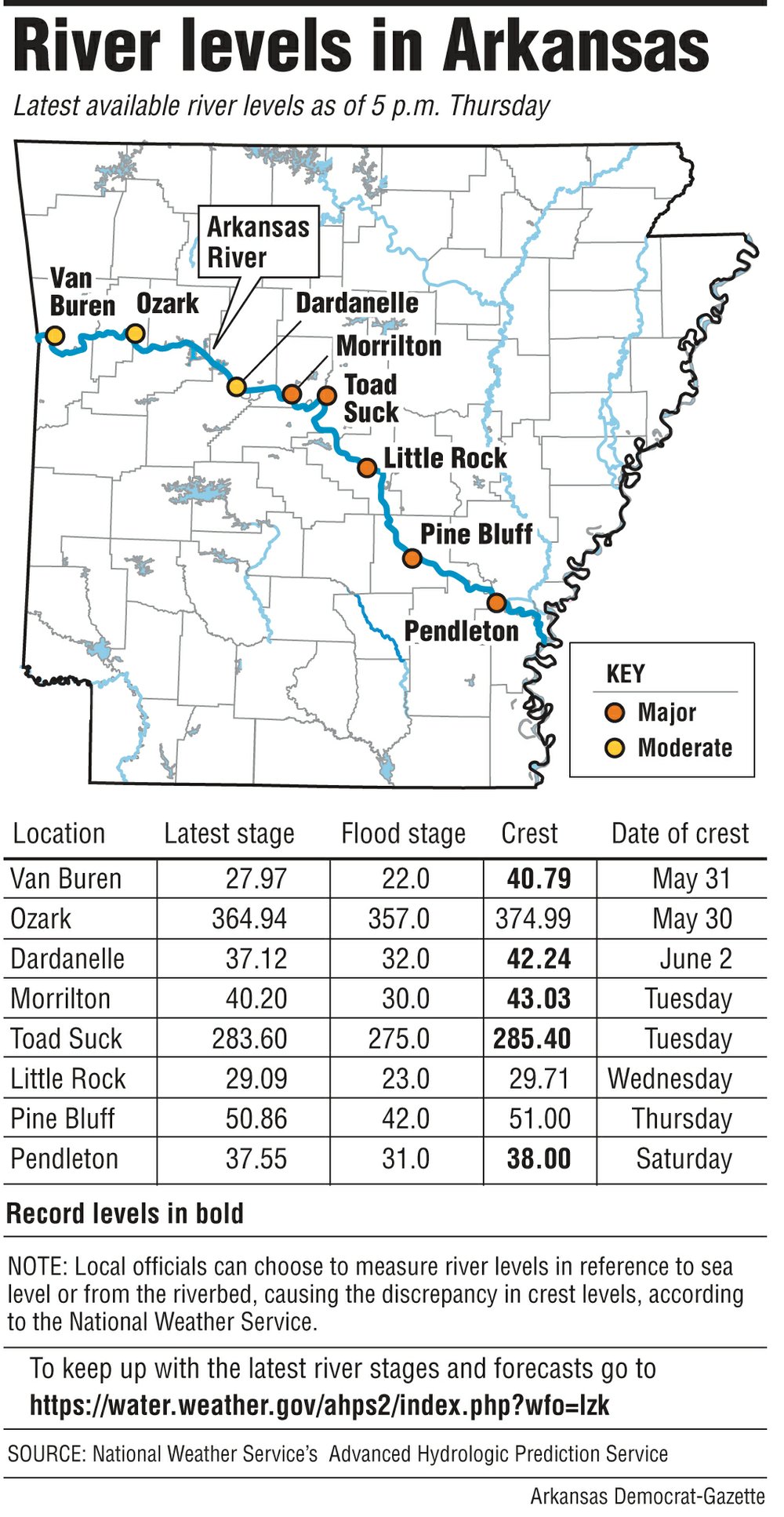 The mayor wants to build two levees around the south end of town. One would replace a temporary levee that protected the city's southeast side, and the other would wrap around several businesses, the high school and middle schools near Arkansas 7 that almost flooded last week.

"I've got a file of things that we've learned or things we need to work on," he said. "I hope this never happens again, but if it does, I want us to be ready."

Ashley Moulder, who lives near the heavily flooded Arkansas 155, said her cattle were grazing on the Dardanelle Levee just days before it broke. The pastures now are awash in debris.

Moulder said she and her husband moved the cows to a sale barn for the duration of the flooding -- all except for one pregnant cow named Caramel. Moulder said she wanted to keep a closer eye on Caramel as she went into labor. She also took their children and their three dogs to her in-laws' house.

A neighbor's home was flooded to the rooftop. Water covered the Moulders' barn and land, but their house was unaffected.

"It's by the grace of God that it wasn't worse," said Brenda Grist, Ashley Moulder's mother-in-law. "We were there the day before [the levee broke] helping a neighbor, and you could see the water seeping underneath it. We had no idea where we were standing was going to be under water."