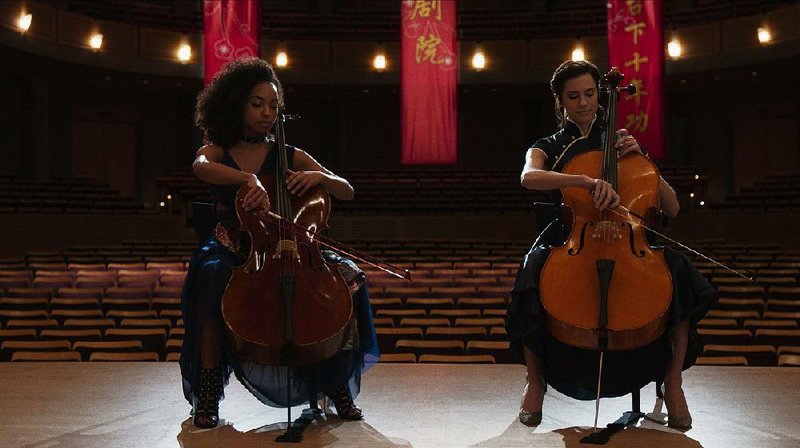 "I don't mind shocking people," director Richard Shepard says from Los Angeles. "I'm always in love with a movie that presses my buttons in some way because it becomes memorable and interesting."

Shepard won an Emmy for directing the pilot episode of the long-running television comedy Ugly Betty. His independent films, including the hitman comedy The Matador, starring Pierce Brosnan, and the Jude Law crime drama Dom Hemingway offer some jolts, but his newest Netflix offering The Perfection has clearly pressed some buttons online.

Before I contacted Shepard for this story, it took less than a nanosecond to find a flood of vehement opinions about the film, its frenzied, pretzel-shaped plot and its macabre images on Google or Twitter.

In The New York Times, Jason Bailey says, "Richard Shepard is a filmmaker aware of the conventions who wields them in The Perfection with wit and precision and knows his audience is in on the gag as well." Aja Romano of Vox.com, however, laments, "It offers us a fetishized vision of female vengeance, one that ultimately seems far more like an extended male fantasy of domination than an authentic vision of female characters overcoming rape culture."

When asked about how his film has been received, Shepard observes, "It literally goes from, 'I loved this movie! Oh, my god! It's amazing!' to 'Don't watch this movie! It's the worst movie ever made!' And it's literally one tweet after another and it's like 50-50."

For six years, Shepard directed episodes of HBO's comedy Girls, so it's not surprising that series' co-star Allison Williams plays a tormented former cello student named Charlotte in The Perfection. Charlotte's once-promising concert career has ended because she has spent the last decade caring for her invalid mother. Spending much of her time in a catatonic state, she's eager to perform again, so she contacts her old mentor (Steven Weber) and a fellow cellist named Lizzie (Logan Browning) in hopes of performing again.

The Perfection might not have made the impact it has if Shepard had chosen to stop there. The co-writer-director takes the film through radical changes in tone and point-of-view. The formal world of chamber music offers a springboard for the shocks that follow.

"The world of classical music is so sort of pristine and tight and buttoned-up by its nature, and one of the things we wanted to do by setting the movie in that world was creating this beautiful but stiff environment that eventually we were going to break out of in a major, major way," he says.

The Perfection also deals with sexual misconduct in the arts and other fields. The movie has hit the marketplace soon after four men have accused conductor James Levine of molesting them when they were boys. Although Levine denies the charges, his career is essentially over. The film also comes out in the wake of movie producers like Brett Ratner and Harvey Weinstein being called out over their behavior as part of the #MeToo movement.

Because the subject is potentially volatile and something people have endured off screen, Shepard says that he took care to ensure he didn't turn a serious issue into a hackneyed revenge fantasy.

"We're in a very specific moment now where we're facing a lot of reality, which some of it is very ugly in terms the way that men have historically mistreated and abused women -- not all men certainly -- but it has been [and] it is certainly a moment where women are trying to have a voice for themselves," Shepard says.

"When you're a male director, if you're doing a movie that has a level of revenge on it, there are there are stigmas to that. I mean the movie was co written by a woman [Nicole Snyder], produced by a woman [Stacey Reiss], starring two women [Williams and Browning]. I feel like I was surrounded by a lot of women who were helping me to make sure that what I was doing was not a full male experience, but [in] telling a much fuller and broader story."

That story goes through several shifts in perspective and chronology. Shepard intentionally disorients viewers. Charlotte's decade away from the stage has not been kind, and Shepard conveys that by selectively focusing on people and objects in the frame and by offering sonic clues that something is amiss. Shepard says he owes a lot to Brian De Palma (Dressed to Kill, Carrie) and South Korean filmmaker Park Chan-wok (Oldboy, The Handmaiden). Both filmmakers specialize in temporarily misleading viewers.

"What I also love about [Park] is that he's willing to tell stories in which there are huge plot twists that make no sense when you first see them, and yet by the time they're done, it's like, 'Oh, yes. This makes complete sense.' I love that. I don't think that happens a lot with American movies," Shepard says.

"Almost every movie has a plot twist. What I'm taking about is a true turning of events in which the movie shifts into almost another movie that you don't think has anything to do with the movie you saw before, but it does."

To tell offbeat stories, Shepard says that he has to get financial support outside of the studio system and that he has to work quickly and cheaply. It's hard to imagine Disney throwing its support behind Shepard's The Hunting Party, a black comedy about a pair of journalists (Richard Gere, Terrence Howard) who give up on reporting on the war in the Balkans and instead try to capture a war criminal who nobody else seems eager to arrest.

Oh, and it's based on an actual incident.

For The Perfection, Shepard recalls completing principal photography in 24 days. One trick to completing a shoot quickly is to avoid unnecessary travel. For The Matador, he successfully passed off Mexico City as several other locations. For his new movie, he disguised Vancouver, where Williams was shooting a television series. Without her involvement, the film, which he intended to shoot in Mexico, might have languished in development. Except for two days of shooting in China, the crew stayed in British Columbia.

It also doesn't hurt that Netflix and other streaming outlets have given off-center movies like The Perfection an audience they might not have had before. Throughout the conversation, Shepard describes himself as a "niche" filmmaker and that most of his movies have played in limited runs with platformed releases. That didn't happen when the streaming outlet bought the movie after it had played at Fantastic Fest in Austin.

"Netflix released it on the same day people are able to see the movie immediately. If people read about the movie on Twitter, they're able to see the movie that night," Shepard explains. "If the actors are on the talk shows, you want to watch it that night. I remember with Dom Hemingway, Jude Law went on The Tonight Show or one of those shows a week and a half before the movie opened in New York and L.A., and, like, how useful is this? People want to watch the movie the day they see something, not a week and a half, much less a month later."

Nonetheless, Shepard is happy that one of his other films found and an audience and may have helped spark a vital discussion even if its distribution plan didn't help his pocketbook.

He recalls, "I love that I can make a movie like The Hunting Party, which is a dark comedy that's a true story about the hunt for war criminals. Two years after that movie came out, they caught the guys that the movie was about. I'm completely convinced because the movie was a giant hit in Bosnia and in that world. It was the No. 1 illegally traded movie in that country and that it started a conversation that eventually led to the capture of (Radovan) Karadzic."