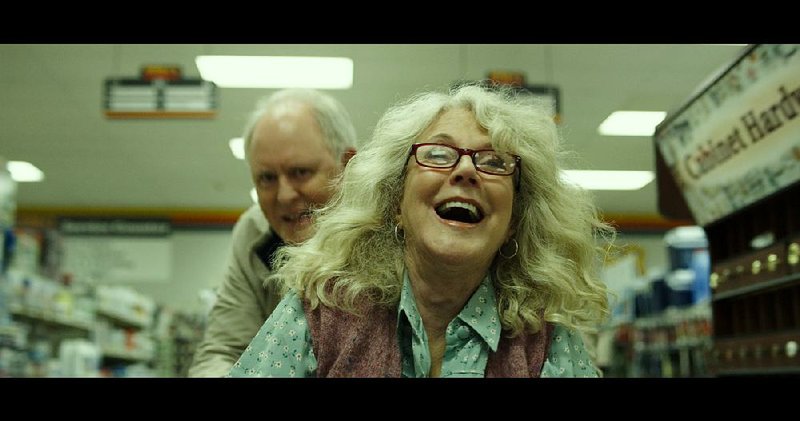 The opening scenes of The Tomorrow Man offer so much potential: a pair of adept A-list actors, gorgeous cinematography illuminating a small-town setting, a seldom-explored premise at the core of an awkward later-in-life romance. Viewers may become hopeful that this could be one of those rare early-summer films well worth watching.

It doesn’t take long for The Tomorrow Man to dispel that notion. The culprit: ill-considered writing that doesn’t take reality into account and forces the cast to behave in illogical and often ridiculous ways.

Not that the characters are all that normal to begin with. Ed Hemsler (John Lithgow), a former systems analyst who lives alone in a tidy house with his well-cared-for Ford truck and actively used desk-top computer, is polite to the people he encounters at the grocery and hardware stores he frequents.

Soon we understand that most of his purchases (he pays by check) are destined to prepare for what he’s sure will be the coming doomsday-level disaster. It’s a topic he addresses online with like-minded folk and when talking to his frustrated son (Derek Cecil from House of Cards), who lives with his wife and teenage daughter about an hour away and isn’t in agreement with his dad’s need to “be ready.”

During one of his frequent grocery-store visits, Ed is gobsmacked by the sight of Ronnie Meisner (Blythe Danner) in the checkout line. Gathering courage, he clumsily asks her out for coffee. That’s where he incorrectly assumes that she is a cohort on the subject of doomsday prepping.

“You seem to know a lot about stuff,” she murmurs offhandedly. “Well, I do, because I care,” he replies.

It doesn’t take long before he adds Ronnie — frumpy, ditzy, yet appealing — to the list of what he cares about. Despite coming across as a stalker at first, Ronnie eventually finds Ed’s odd behavior somewhat charming. And when he reveals, for the first time to anyone, the extent of his preparations for end times — “my security blanket, my safety net, my 401(K),” he explains — she approves. “It’s perfect,” she says.

No wonder. Turns out that Ronnie has some secrets of her own.

The story of their developing relationship goes along fine until incongruities sneak in; no woman over the age of 50 is going to consent to crawling into a shopping cart and careening around a home supply store, giggling wildly, as her new boyfriend provides the power. Scenes like this one, which start to wear on the viewers’ acceptance of this already improbable story, spell a doomsday scenario of their own.

Noble Jones makes his directorial debut with this slowly disintegrating adventure; his saving grace is that he photographed it as well, resulting in a lovely realism that doesn’t match the implausibility of the plot (he wrote the screenplay as well, so there’s no one else to blame).

No doubt this effort is well intended, but the details are too distracting to hold it together.