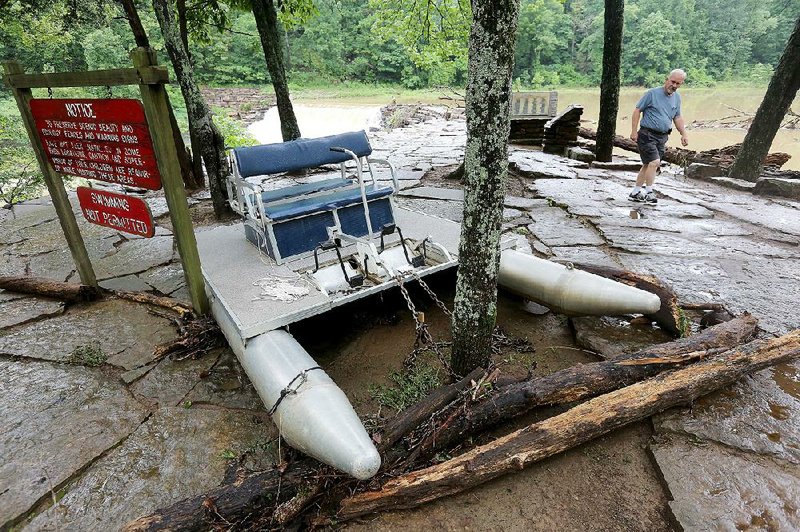 The National Weather Service reported about 2.5 inches of rain at Drake Field in Fayetteville over six hours Thursday night.

The Arkansas Department of Transportation said Arkansas 265 north of Strickler was closed to traffic at 9 p.m. Thursday. A culvert failed, and the highway will remain closed until the structure is replaced, according to the department.

Arkansas 220 is closed south of Devil's Den State Park, according to the highway department. The highway was closed about 10 p.m. Thursday when a landslide covered all lanes of a section between Arkansas 170 and North Lee Creek Road. The highway will remain closed until the material is removed.

Washington County officials said they had one bridge closure along with numerous road closings and reports of minor damage. Charles Ward, the county's road superintendent, said the approach to a bridge on Malico Mountain Road near the junction with Arkansas 265 has washed out and the bridge is closed.

Ward said his crew was still working Friday to repair the bridge approach. Ward said the road should be open for traffic with the temporary repairs by Monday.

The county posted people at some of the road closings to prevent drivers from going through the barriers and into the floodwaters, he said.

Capt. Ti Augustine with the Washington County sheriff's office said there was one report of a GMC Sierra driving into high water in the area of Bethel Blacktop Road and Shamrock Road about 11:15 p.m. Thursday.

"There were two people in the vehicle, and they both got out," Augustine said. "We have a report of a truck found in a field off Shamrock Road that we think is the same one."

Augustine said the sheriff's office's Facebook page has a list of county roads that are closed, and the list is updated as the status of the roads changes.

Robert McGowen, head of Benton County's Department of Emergency Management, said there were no major issues in the county. Jay Frasier, head of the Benton County Road Department, said high water in the Illinois River near Siloam Springs prompted the closing of the kayak park at Fisher Ford Bridge, but otherwise the county's roads and bridges were in good condition.

Carl Gales in Washington County, chief of staff for County Judge Joseph Wood, said county roads crews will work all weekend to get temporary repairs on roads that were "scoured" by floodwaters. He said it will be next week before the county has an idea how much the repairs will cost. 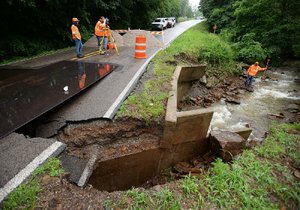 Photo by Andy Shupe
Engineers and workers with the Arkansas Department of Transportation survey the area around a bridge on Arkansas 265 in Hogeye after floodwaters from the creek it spans washed away the roadbed Thursday evening. The highway was closed south of the Arkansas 156 intersection.