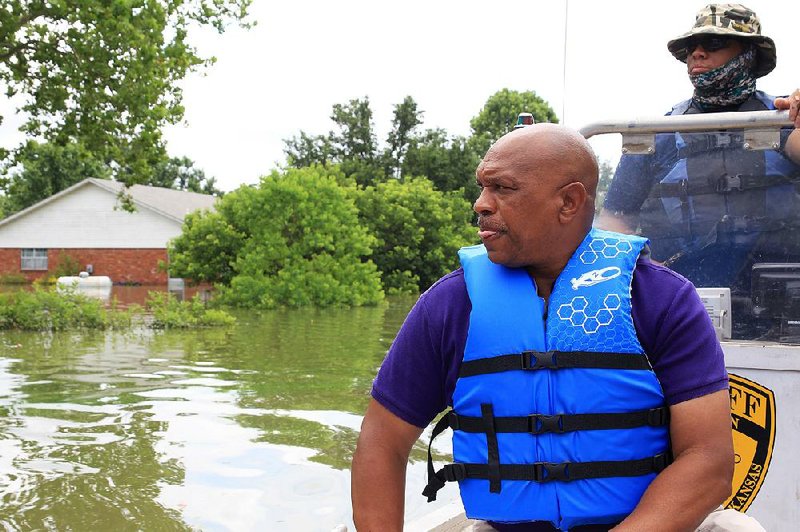 Although predictions regarding the timing and height of the Pine Bluff crest were changed several times, including as recently as Wednesday, forecasters called for the river to crest at 51.5 feet by late Thursday and to remain at that level through most of Sunday.

Forecasts had predicted the crest at Pendleton would occur Sunday at 38 feet, but the National Weather Service said Friday that it appeared to have crested at 37.63 feet at 8:15 p.m. Thursday. The level was dropped to 37.55 feet by 3:15 p.m. Friday, and it's predicted to drop below major flood stage by next Friday.

Meteorologist Dennis Cavanaugh of the National Weather Service attributed the smaller crests and Pendleton's earlier crest to the unprecedented nature of the flood event.

"Part of it, especially at Pendleton, is that we've never seen river levels this high before," Cavanaugh said. "So we don't really know how much the water is going to spread out versus how high it is going to get.

"In this case, the water didn't get all the way to 38 feet [in Pendleton] because it started spreading out versus getting higher."

Cavanaugh said some of the water may have been lost to backwater flooding along various river tributaries and streams, and some of it may have been lost along the flood plain next to the river channel that is not normally a part of the river. Another factor, he said, could be that the Mississippi River hasn't crested yet, which allowed some of the Arkansas River to flow into the Mississippi.

"If the two rivers had crested at the same time, it would have made things much worse, at least in Desha County, because it would have backed up the Arkansas River."

Westerman questioned officials on the number of homes sitting inside the levee system in Jefferson County.

"The number we came up with is 558," said Karen Blevins, Jefferson County's emergency services director. "That was done a few years ago, so we're not sure how accurate the number is. That's a rough estimate. We're actually doing a little bit more to try and get some better numbers."

Jefferson County's county judge, Gerald Robinson, said the flood has provided evidence of what the county and the state have done right and what needs to be addressed.

"This whole thing has made us take a look at our levee system and to realize that they have been neglected in some areas," Robinson said. "It's really making us take a look at some of these levee boards and things that we need to do to create a stronger board, to strengthen those levees and to maintain them."

As the ranking member of the Water and Environment Subcommittee of Transportation and Infrastructure, Westerman said he had already requested a briefing from the Army Corps of Engineers on the entire McClellan-Kerr Arkansas River Navigation System.

"That's one thing I'm interested in -- how well the federal levees have held up versus those in the levee districts," he said. "And we still won't know until the water goes down just how much damage there has been to the locks and dams."

Westerman said a lot of infrastructure work will need to be done once the water recedes.

Pine Bluff Mayor Shirley Washington told Westerman that she has received a lot of questions from people regarding what type of help will be available from the Federal Emergency Management Agency and how soon it take to receive such assistance.

Westerman provided information about the FEMA Individuals and Households Program, which provides grants of up to $33,000 to eligible people whose homes sit in a federally recognized disaster area, including flooding.

"IHP grants provide swift grants to return your house or apartment into a habitable condition after a disaster," he said. "Everyone may apply, regardless of income level or whether they have flood insurance."

Westerman said the grant is primarily intended to cover costs not covered by flood insurance, and that those with flood insurance who receive Individuals and Households Program grants must repay the money once they are reimbursed by insurance.

He also noted the typical payout is generally lower than the $33,000 maximum grant.

"For houses flooded by Hurricane Sandy in 2012, for example, the average grant was just $8,016," Westerman said.

Westerman noted the magnitude of the devastation after his tour of Island Harbor Estates.

"That's a lot of damage," he said. "It really lets you see up close and personal that there are real people being affected by this. These are real homes and real people's lives."

Gov. Asa Hutchinson said Friday that he has submitted a request for a federal disaster declaration to President Donald Trump for eight counties in Arkansas, including Jefferson County.

The other counties were Conway, Crawford, Faulkner, Perry, Pulaski, Sebastian and Yell.

Hutchinson's letter to the president noted that evacuations were issued for residents in areas around the levee, including Pine Bluff Regional Park Campground, Tar Camp, Rising Star Parks and Island Harbor Marina.

He also noted several roadways in Jefferson County were either blocked or washed out by floodwaters.

"We get a lot of flooding in south Arkansas but nothing like this," Garner said. "The scale of it here, you see it in photos or on a Facebook post, but it's nothing like seeing it for real." 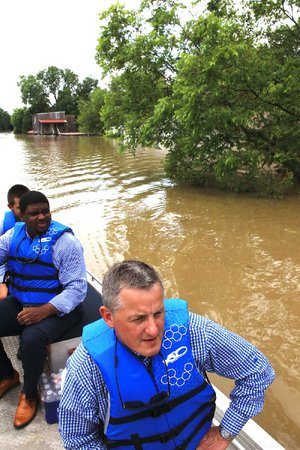 Photo by Dale Ellis
U.S. Rep. Bruce Westerman (foreground) gets a look at the flooding Friday at Island Harbor Estates in Pine Bluff during his visit to the area to meet with county and city officials and discuss their needs and federal programs that could help. In the boat with Westerman is Jefferson County Sheriff Lafayette Woods Jr. 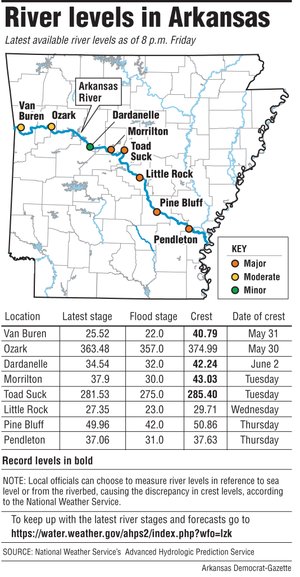