Coming together in Newport

Newport was a lively place when my parents moved there in the summer of 1948. Downtown was the home of dozens of businesses. Streets were filled on Saturdays with people from surrounding communities who came to town to shop. A fellow named Sam Walton operated the Ben Franklin five-and-dime store. He lost his lease a couple of years later and had to move to a place called Bentonville in what was then the poor northwest corner of Arkansas.

My father, a Benton native, had served as a bombardier on a B-17 for two years during World War II before returning to Arkansas to attend college and play football at what's now Ouachita Baptist University in Arkadelphia. He married a Des Arc girl while still in school. My mother graduated in 1947 and worked for a downtown businessman for a year while my father finished his degree. He was hired as the head football coach at Newport High School, and my mother was hired as an elementary school teacher.

Walton occasionally would take the new football coach quail hunting. During duck season, my father hunted with George Kell, the Detroit Tigers star who would return home to Swifton during the baseball off-season.

My parents spent only three years in Newport but made friends for life. They loved the place. That has been my experience with people who grew up in Newport or moved there later. And at a time when Jackson County is losing population, Newport seems to be holding its own--the exception rather than the rule during these dark days for the Arkansas Delta.

"The old Newport residents and the new folks have finally joined together to make things happen," says attorney Jim McLarty, who has practiced law for more than 50 years. "It's good to see."

I'm having lunch at the Newport home of John Conner Jr., one of the state's largest individual landowners. Conner, who has farming operations in several counties, has gathered community leaders to talk about Newport, its past and its future.

Black River empties into the White River. Its leaders made a crucial mistake in the 1870s, however, when officials of the Iron Mountain, St. Louis & Southern Railroad offered to run their tracks through Jacksonport. They refused to provide the $25,000 and the right of way requested by the railroad, which instead established its White River crossing at Newport. By the 1880 census, Newport had surpassed Jacksonport in population (683 to 656).

An 1879 story in the Jacksonport Herald quipped that "the latest statistics show that one pint of Newport whiskey contains four fights, three knockdowns, one stealing of the ballot box, one contested election and one rape."

"As a river town at the foothills of the sparsely settled Ozark Mountains, Newport attracted a rough cadre of loggers, trappers, boatmen and farmers," Marvin Schwartz writes for the Encyclopedia of Arkansas, a division of the Central Arkansas Library System. "Newport entered the 20th century as a prosperous river town, its wealth accumulating through timber and cotton sales. Commerce was concentrated along Front Street with its assortment of hotels, saloons, banks and stores. The Newport Opera House opened in 1891, and the Newport Daily Independent was established in 1901. In 1906, Newport's daily rail traffic included 23 trains stopping at the city's Iron Mountain depot."

The city was also a center for the pearl button business, with thousands of mussel shells harvested each week from the White and Black rivers. By the 1930s, there were 200 button cutters working in Newport. Plastic buttons later killed the industry.

"The Newport Air Base, utilized as a training site for the U.S. Air Force, the U.S. Marine Corps and the U.S. Navy, operated from 1942-46, bringing a large influx of military personnel and families to town," Schwartz writes. "After the war, the air base was leased to the city. Former base housing met the demand for public housing. Base hangars and other structures were used as incentives in a successful industrial recruiting campaign by the Newport Chamber of Commerce. Manufacturers originally located at the site included Trimfoot Shoe, Victor Metals (the world's largest producer of aluminum toothpaste tubes) and Revere Copper & Brass."

A May 1951 story in the Daily Independent claimed that Jackson County ranked 10th among counties nationally in cotton production, eighth in rice, 11th in soybeans, 110th in strawberries and 42nd in timber.

Over lunch, former U.S. Sen. Kaneaster Hodges Jr. talks about how two local residents shamed him into getting busy at a time when Newport was losing population.

"They confronted me and asked, 'Why don't you do something?'" says Hodges, who was appointed by Gov. David Pryor in late 1977 to fill the vacancy created by the death of Sen. John L. McClellan. Hodges had earlier served as city attorney and deputy prosecuting attorney.

Hodges used his connections with the Walton family to help fund an economic development study by a consulting group from Michigan. The study determined that Newport had lost almost 2,000 jobs during the previous eight years.

"People were discouraged," Hodges says. "It was clear that we needed to go in a different direction."

Several things happened to stop the bleeding, according to Hodges. City leaders focused on helping existing industries such as Arkansas Steel Associates prosper and grow. Newport voters then approved a sales tax devoted to economic development efforts. After the tax proposal was defeated at the county level, it was approved as a city-only tax. The citywide proposal passed by less than 25 votes the first time around. A decade later, it was renewed by a large margin.

Hodges says efforts are now being focused on improving the Newport School District.

"We've had a number of young families move here, and they're dedicated to the public schools," he says.

"Prior to coming here, I had stayed in towns for four to six years," he says. "When they asked me how long I would be here, I told them most likely it would be four to six years. Fourteen years later, I'm still here and can't imagine living anywhere else."

Consistency at the top has helped. Mayor David Stewart, for example, has been in office for more than 16 years. He graduated from the Arkansas Law Enforcement Training Academy in March 1981 and joined the Newport Police Department later that month on his 21st birthday. He served for 21 years, the last eight of those as chief.

After becoming mayor, Stewart made it a priority to clean up the city. A dilapidated trailer park was purchased along the shores of Newport Lake and removed. There's now a farmers market and a boat ramp at the site.

Chadwell introduces me to Phillip Brown, who left his job in southern California to return home to Newport. Four years ago, Brown formed an organization known as IMAD, which stands for I'm Making A Difference. The nonprofit organization, which now has 16 employees, operates two community centers, two restaurants and a swimming pool.

"We're all about youth development and community revitalization," Brown says. "We have after-school programs from 3:45 p.m. until 5:45 p.m. during the school year, and then we have 130 kids in a summer program. We feed them and take them on field trips. We're also now doing things like providing free haircuts for those who can't afford them and feeding the elderly. We use the restaurants to raise funds, teach job skills and bring the people of Newport together. We do everything from catering to yard cleaning in order to raise funds for these programs. People pay us whatever they feel they can afford."

Longtime Newport resident Marvin Thaxton describes Brown as "part of the changing attitude you're seeing in Newport these days. People are getting over that 'woe is me' syndrome that afflicts other Delta cities. They're getting after it."

Newport benefited in 1998 when the state opened the Grimes and McPherson prison units, providing hundreds of jobs.

Newport also has benefited from Arkansas State University-Newport, a two-year school that became a stand-alone campus of the ASU System in 2001. It began in 1976 as the White River Vocational-Technical School and became a branch of ASU-Beebe in 1991.

"The thing about Newport is that everyone from the people at ASU-Newport to the business owners work together closely," Chadwell says. "We also maintain a great relationship with the Arkansas Economic Development Commission. If they launch a new program at AEDC, you can bet that Newport is going to be a part of it. When they started what's known as their competitive communities initiative, the first two cities certified were Newport and Paragould."

After lunch at the Conner home, Chadwell takes me on a driving tour of the city. Two of the five facilities approved to grow medical marijuana in the state will be at Newport. We drive past both construction sites. One is adjacent to the prison. The other is near ASU-Newport.

"When these are both up and running later this year, about 40 percent of the medical marijuana grown in the state will be produced here," Chadwell says. "The companies will employ about 50 people each."

There has been a great deal of emphasis on Newport's historic downtown. A veterans monument, park and stage on Front Street have become centers of activity.

In a building constructed in 1914 as the city's post office, J. Ross Jones of Batesville, whose family was in the newspaper business for decades, has established Postmaster Spirits Craft Distillery. He plans to use political satire in his newest line of products, the first of which is an orange-flavored vodka known as Trump Tonic.

"Embrace the orangeness," the bottle reads.

Jones will have a bar serving drinks inside the building and a beer garden on the back deck when there are events downtown.

A September festival known as Depot Days has been transformed into a series of downtown events that begin in May and end in October. There are movie nights, the Delta Arts Festival, concerts, children's plays, art workshops and more. All of the events are free and serve to bring people downtown. Businesses and individuals have contributed $170,000 this year to put on the events.

"It's all coming together now," Hodges says of the various efforts to end population loss and start Newport heading in the other direction. "We woke up and did something." 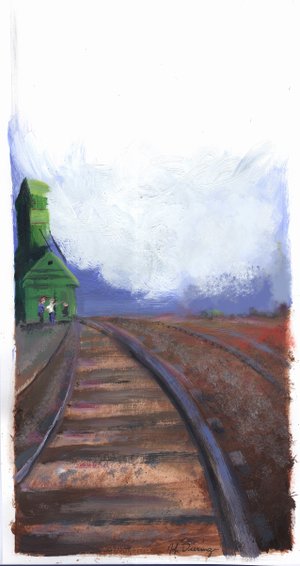 Print Headline: Coming together in Newport