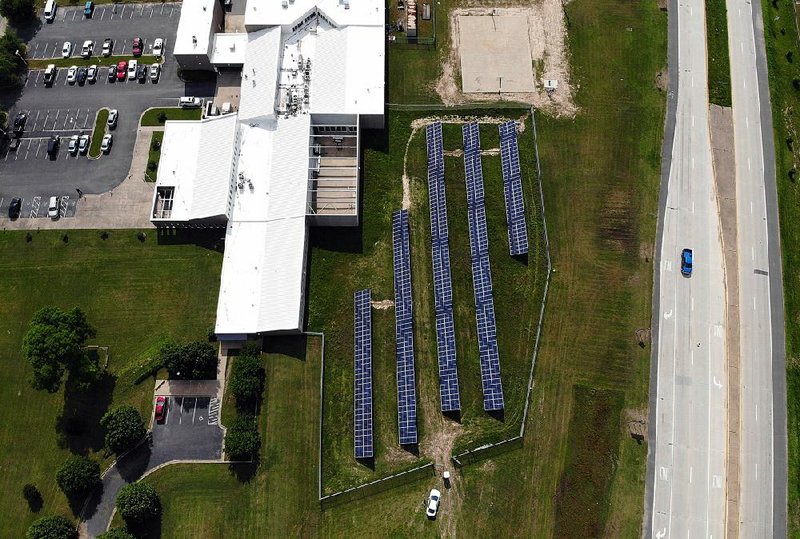 With changes in Arkansas law that makes solar power more competitive in the marketplace, Seal Solar is going all in, shifting its focus solely on solar energy.

Co-founders Josh Davenport and Heather Nelson say their construction company only is working on solar projects both large and small, including residential, agricultural, commercial and governmental systems. They recently sold the company's heating and air unit to Little Rock's Smart Comfort and their energy-efficiency division to Custom Insulation and Supply Inc. of Hot Springs. They unveiled their rebranded office in North Little Rock's Argenta neighborhood last week.

Seal Solar's project in Jefferson County providing solar power to county facilities is completed and should be interconnected to the grid this week. The company's Washington County project, which will use solar power to offset energy costs to county buildings, is expected to begin work in late June or early July.

"We're proud to be part of the first wave," Davenport said.

The business partners say recently passed legislation in Arkansas made a purely solar focus viable. Seal Solar's bosses said they've also entered into an agreement with Lightwave Solar of Tennessee on the Jefferson County project and are working on projects as a subcontractor for global diversified technology company Johnson Controls, Inc.

Arkansas' new law allows for leasing and third-party purchasing of solar systems for nontaxed entities like city and county governments and nonprofits, making the projects more financially feasible, the partners said. It also greatly increases the size limits for solar arrays, making them more scalable and adds language that grandfathers in rates for early solar adopters.

According to data released in March from the Solar Energy Industries Association, a solar-power advocacy group, 0.34% of Arkansas' electricity comes from solar power. The state's solar installations for 2018 jumped to just shy of 120, up by just a handful from the year earlier. The association pegs the value of 2018 investment in solar in Arkansas at $140.2 million.

According to The Solar Foundation's 2018 National Solar Jobs Census, Arkansas added 85 solar jobs in 2018. Total solar jobs for the year were 369 in 2018, a 30% increase over the previous year. The state ranks 47th for total solar jobs and 37th for installed solar capacity at 140 megawatts.

An analysis from the Business Innovations Legal Clinic of the William H. Bowen School of Law, University of Arkansas at Little Rock indicates third-party solar leasing could generate up to three times the existing solar jobs in Arkansas and generate additional investment in related sectors. It also concluded third-party leasing would lower upfront costs by 25% to 40%, making solar power more affordable to average Arkansans.

The U.S. Energy Department says that since 2008, solar installations have grown from producing 1.2 gigawatts of power to about 30 gigawatts -- enough to power 5.7 million average American homes. According to the department's website, the average cost of solar panels has dropped more than 60% and the cost of a solar electric system has dropped by about 50% since 2010.

In Jefferson County, the solar segment of a $2.3 million project to reduce electrical, gas and water and sewer expenses, will generate 176 kilowatts of power. Seal Solar worked with Lightwave on the Johnson County project. When it goes online, it'll be the first and the largest county-owned solar array in the state.

"They will be the first through the door," said Alex Ray, the director of performance infrastructure business development for Arkansas for Johnson Controls, which is in charge of the total project.

Gerald Robinson, the county judge of Jefferson County, said the county has been interested in solar power for quite a while but in recent years, the overall cost of solar projects have become more viable, making them attractive as his administration strives to keep costs down.

"I felt like it was cutting edge and I wanted to be a part of it.," Robinson said of solar power.

Late last month, Washington County officials approved an $8 million plan aimed at saving energy including a large bank of solar panels that will be able to produce 2 megawatts of electric power. When completed, the project will be the largest non-utility owned solar array and the largest county-owned solar array in the state.

Ray, from Johnson Controls, said Seal Solar was pivotal in the work on the Jefferson County project and will be a vital part of the work yet to come in Benton County.

"They're thought leaders in solar power for Arkansas," Ray said.