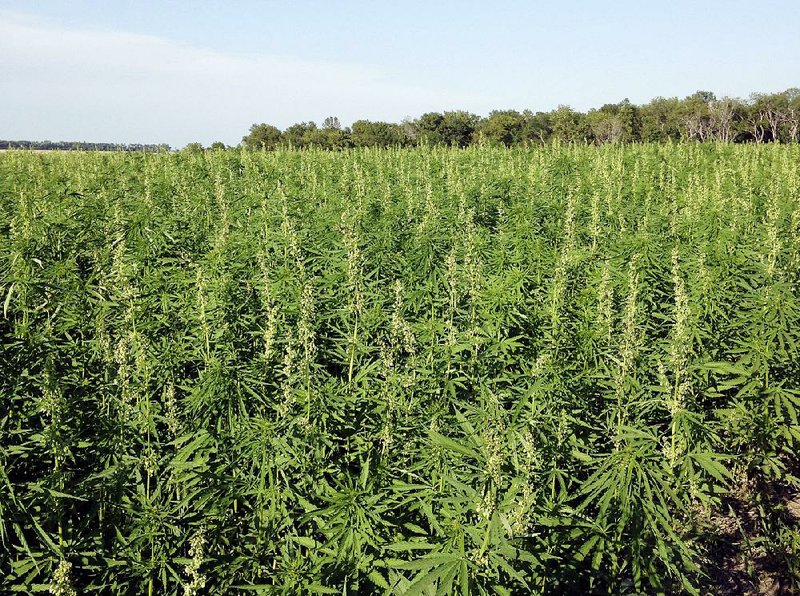 Industrial hemp, like this growing in 2016 in North Dakota’s Benson County, is an emerging market for farmers.

PHOENIX -- Arizona farmers soon will begin planting hemp as its byproduct -- CBD oil -- is exploding in popularity, with some supporters saying it could overtake a traditional crop in the state because there's more money in the cannabis plant than in cotton.

The emerging market for hemp, which contains ultra-low levels of the THC that creates a high in marijuana, will be focused in Arizona on producing flowers and seeds that can be used to make oils, said Randy Pullen, a former state Republican Party chairman and hemp-processing company investor who helped set up a state chapter of the Hemp Industries Association.

Hemp oils are increasingly being used in foods and as pain relievers, as well as for other medical conditions. In April, however, the Food and Drug Administration issued warning letters to companies for making unapproved health claims about the products.

That estimate can vary widely though, based on federal studies of the crop done before the recent hemp oil craze.

And farmers, a notoriously careful lot, will be cautious about switching to a crop without an established market and buyers stepping up to contract for crops, said Kevin Rogers, executive vice president with the Arizona Cotton Growers Association.

"These guys have investments in land, in machinery, in everything that it takes to keep their farms going year after year,' Rogers said of cotton farmers. "A guy may try 5 acres of it, but it's way premature. It's great that there's a new crop that we can look at, but it's in the infancy stage for us."

The 2018 state law allowing industrial hemp farming and processing was to take effect in August after state agriculture officials set up a licensing and certification program. But state lawmakers moved up the effective date of the state law to May 31 after the federal farm bill passed in December and legalized industrial hemp nationwide.

Brian McGrew runs the program for the department and said it is now reviewing applications and expects to begin issuing licenses soon. Seeds could be in the ground by mid-month.

About 200 applications, mainly for growers and processors, had been filed after the official window opened. He said recently that 35 of those are complete, including the fingerprint clearance card, and the number is rising daily.

The cannabis targeted for Arizona isn't the same variety as used to make hemp rope, but instead is a strain optimized to produce the most flowers and seeds to process into oils and powders. After the flowers and their seeds are removed and processed, the remaining fiber can be used for animal feed, as a concrete strengthener or as insulation, among other uses, Pullen said.

Farmers and others involved with hemp, including those who harvest, transport and process it, must hold state licenses issued by Arizona Department of Agriculture and get fingerprint clearance cards. Licenses start at $150 for harvesters and transporters and go to $1,500 for a grower and $3,000 for a processor. Fees per acre or per ton of processed material plus testing fees are added on and licenses can be renewed annually.

The department does not know how many acres may be planted in hemp this year because a farmer may show his entire holdings as a potential growing area. Once planted, the plots will be marked with signs showing it is industrial hemp.

Pullen said he won't be surprised to see hemp displace some of the cotton grown in Arizona if the market takes off as some studies have suggested. The state saw about 175,000 acres planted in 2017, federal figures show.

"Probably half of that will be hemp in a few years," he said.

Rogers, the cotton association official, said that's not likely unless and until the market matures.

"Obviously ... [cannabis] oil is outrageously priced, so everyone's looking at that and thinking they're going to make tens of thousands of dollars," Rogers said. "And you know, I hope somebody does. But our guys are going to want to have good contracts and make sure it's going to work."

One concern for growers is push-back from medicinal-marijuana producers who worry that hemp will cross-pollinate with their marijuana strains. Arizona medicinal marijuana is grown in greenhouses, but any hemp plant within 10 miles could threaten the industry.

"They are very worried about that," Pullen said. "We've seen that across the country."

There are no state rules on how close hemp can be grown to greenhouses where medical marijuana is farmed, McGrew said. 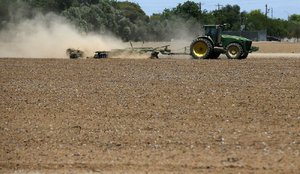 Photo by AP/ROSS D. FRANKLIN
A farmer plows a dry and dusty cotton field in May of 2018 near Phoenix.