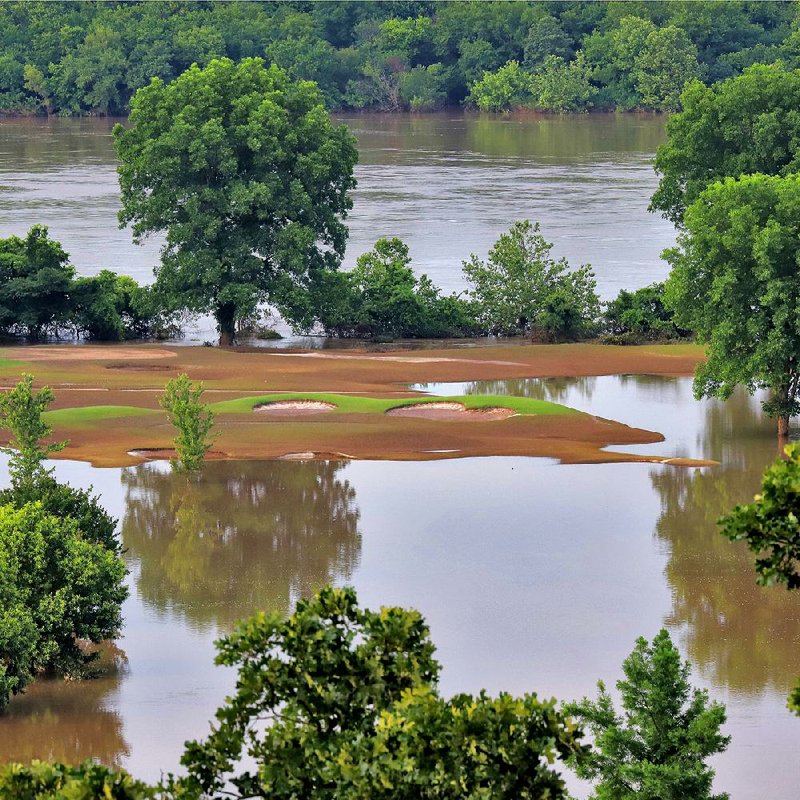 The Arkansas River flows in the background Saturday as its floodwaters still cover sections of Little Rock’s Rebsamen Golf Course. Access to the golf course and Murray Park remains blocked. Across the river in North Little Rock, much of Burns Park and the Arkansas River Trail are still under water.

CONWAY — Although major flooding is still occurring along most of the Arkansas River, the water has begun receding and conditions are improving, authorities say.

In Faulkner County, officials had feared an imminent breach of the levee at Lollie Bottoms late Thursday, but by Saturday they were cautiously optimistic that the levee will hold, despite being eroded to the point that barely 4 feet of it remained to hold back the river.

“It’s not very pretty right now, but it’s holding on like a hair on a biscuit,” said Bobby Kelly, spokesman for the city of Conway.

Gov. Asa Hutchinson said in a tweet Saturday that President Donald Trump had approved his request to declare the Arkansas River flooding a major disaster, unlocking additional federal aid for the state’s recovery.

In a letter that Hutchinson sent Friday to Trump, he estimated that the state will need more than $8 million in cleanup funds and $100 million for infrastructure repairs. That estimate could change as water levels continue to drop and reveal damage, Hutchinson said.

In central Arkansas, many streets that had been flooded reopened as the river level at Little Rock dropped to 26.1 feet, which is officially no longer major flood stage.

Also, three locations have opened for Little Rock residents to drop off no-longer-needed sandbags. They are at Fourche Dam Pike and East Roosevelt Road; Chenal Valley Drive at Chenal Parkway; and in the War Memorial Park parking lot.

Officials advised residents not to reuse sand that has been in contact with floodwaters, since floodwaters contain bacterial and other contaminants. Also, residents were urged not to dump the sand in ditches or creeks.

In Faulkner County, County Judge Jim Baker called it “divine intervention” that the Lollie Bottoms levee held and the river had dropped enough by Saturday to relieve some pressure on the levee.

He said that although conditions have improved along the river, the danger of a breach remains and officials will continue to monitor the levee until that danger has passed.

“The high risk has passed,” he said.

Baker said the key is to keep the levee together until the Arkansas River recedes enough to get the water off the levee.

Baker said the river is about 18 inches up on the levee, but it will have to fall several feet before attempts can be made to repair it. 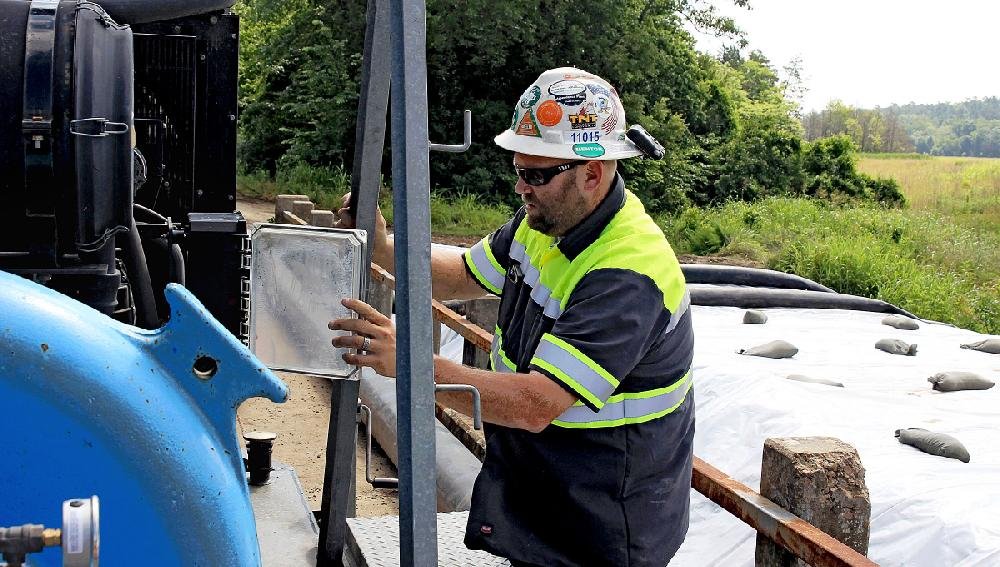 Rain for Rent employee Ryan Frye of Conway checks the readings Saturday on two pumps on a bridge over Tucker Creek as workers pump water from one side of a temporary dam to the other to divert water out of the Conway side of the creek.

“We can’t even get in there for the foreseeable future as wet as it is,” he said. “That’s our next biggest challenge, to repair the big hole in the levee.”

Baker said the river washed out about 150 yards of it to the point that only about 4 feet of it was holding back the river.

At that point, the county issued warnings that a breach was imminent.

“But thank goodness, it held,” Baker said. “That was just divine intervention, that’s all I can say.”

As a precaution, in case the levee does breach, the county built a dam Friday over Tucker Creek at Donnell Ridge Road to divert water from the Conway side of Tucker Creek to the Lollie Bottoms side.

“This was a joint effort by Conway Corp., the Faulkner County Road Department, and Rain for Rent pump rental,” Kelly said. “The fact that they built this temporary dam in less than 24 hours is a real testament to how hard people are working together during this crisis.”

Two portable pumps, capable of handling 600,000 gallons of water per hour, were placed on the bridge over Tucker Creek to push water from one side of the temporary dam to the other.

Baker said the water on Lake Conway had dropped about 6 inches since Friday and was continuing to slowly fall Saturday.

“I think we’ll probably see a minimum of 10 days to two weeks before the water levels really get back to normal,” Baker said. “We missed the rain, which is probably the biggest unknown factor in this. They were predicting 2 to 4 inches of rain, which would have complicated this situation, but for some reason, the Conway area missed the rain.”

At the Lake Conway home where Betty Fernau lives with her husband, Aaron, although water did not get into their house, Fernau said they were stranded for about a week with water over the only road.

The water “came up into our yard,” Fernau said. “It was OK. I can work from home, so I just worked.”

Fernau said Saturday was the first time since Tuesday that she was able to leave her house.

In Jefferson County, the Arkansas River, which crested at 50.86 feet on Thursday, had fallen to 49.31 feet by 2 p.m. Saturday, according to the National Weather Service. It is forecast to drop below flood stage by next Saturday.

“It’s receding,” said County Judge Gerald Robinson. “I’ve had my [Office of Emergency Management] folks out inspecting and again, just where we were at yesterday, you can tell it’s going down. I don’t know the pace at which it’s going down, but it’s moving in the right direction.”

Robinson said the county is waiting for the water to recede sufficiently to begin assessing the full extent of the damage.

In his 31 years of working for Jefferson County, first in the sheriff’s office and now as county judge, Robinson said this is the worst disaster he has seen befall the county.

In the Desha County town of Pendleton, the Arkansas River crested at a record 37.63 feet Friday evening and by 1 p.m. Saturday had dropped just under a foot, to 36.84 feet. It is forecast to drop below flood stage by June 19, according to the weather service.

“We got a little bit of a fall that happened last night,” he said. “It’s not a great deal, but you know, it’s encouraging to at least see it going that way.”

Tindall said he expects it will be some time before officials can get into the town and begin assessing the damage.

“If we’re in there by the middle of next month we’ll be lucky,” he said.

Tindall said the river current, which is still swift, has moved more out into the center of the channel.

“Earlier,” he said, “it was running down the streets to where you couldn’t control a boat. But now it’s moved back out into the middle of the river.”

Hutchinson noted last week that the state has had 20 presidentially declared disasters since 2008, and that the estimated cost to repair infrastructure alone would severely deplete the state’s disaster relief fund. Hutchinson said the damage to public infrastructure includes roads, bridges and utility plants, and parks and recreational facilities.

Individual assistance for victims of flooding can run as high as $33,000 in federal aid, but U.S. Rep. Bruce Wester-man, R-Ark., at a stop Friday in Jefferson County, said the average payout is far lower.

Meteorologists at the National Weather Service said Arkansas should see mostly sunshine for the next week.

Information for this article was contributed by Clara Turnage of the Arkansas Democrat-Gazette. 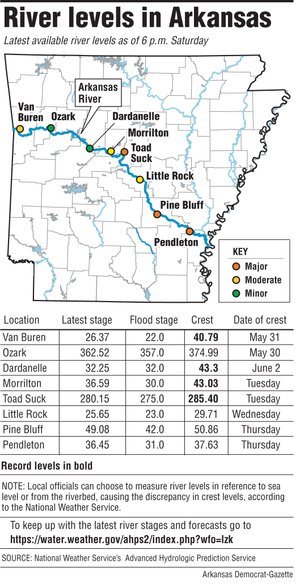