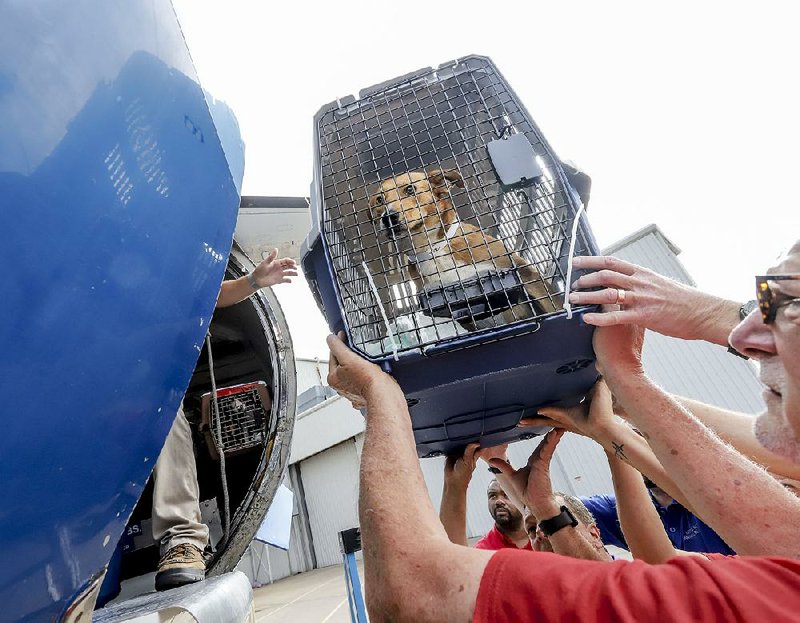 A dog looks out from its cage Saturday at Bill and Hillary Clinton National Airport/Adams Field in Little Rock while being loaded onto a plane that will carry it to the Pacific Northwest. More photos are available at arkansasonline.com/6919airdogsrescue/.

A plane full of whiskers and wagging tails lifted off from Little Rock on Saturday morning heading to new homes in the nation's Northwest.

Some 169 dogs and cats in Arkansas' flood-affected areas were aboard that plane.

Ric Browde, president and chief executive officer of Wings of Rescue, said the animals were going to shelters in Washington and Idaho, where they will likely be adopted in less than four days.

"The shelters they're going to, they're looking for animals and they have approved adopters lined up," he said. "We were fortunate enough to work with some really good people. We all banded in together ... and there are now 169 fewer pets in Little Rock."

Browde said disaster rescue animals are the "Kardashians of pets," meaning they are always adopted quickly because they have an interesting back story.

Wings of Rescue is an animal welfare group that flies shelter animals away from disaster-affected areas to make room in those areas' shelters for the influx of animals that normally follows a natural disaster, he said.

Browde said pets are commonly forgotten or left behind during major disasters.

"When your life falls apart, you start not paying attention to anything but your own survival," Browde said. "Maybe they didn't fit in the car when you evacuated and you think they'll be all right, but they aren't. ... I don't think [evacuees] deliberately do it, I think they wait to the last minute and then they're so panicked they just forget."

Only animals that have been in shelters for extended periods of time before the disasters are transported. Saline County humane society director Ann Sanders said only long-term shelter pets are moved so that animals that are lost or have been surrendered during disasters can be housed locally and possibly returned to their original owners.

"If you have a natural disaster going, you don't pick an animal up and move it out of state immediately," Sanders said. "All the animals we sent were shelter animals before this flood."

Sanders said she and her crew arrived about 7 a.m. Saturday at the Lynx fixed-base operator airstrip of the Bill and Hillary Clinton National Airport/Adams Field in Little Rock, where more than 30 people were lugging crates of animals to a plane.

"It was absolutely wonderful -- animals and people were everywhere," Sanders said. "It was great to meet these pilots and everybody. You can tell they have a great love for the animals." 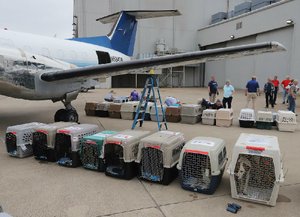 Photo by Arkansas Democrat-Gazette/JOHN SYKES JR.
Dogs wait on the tarmac at Bill and Hillary Clinton National Airport/Adams Field before being loaded Saturday onto a plane carrying them to the Pacific Northwest, where shelters already have potential adopters lined up. More photos are available at arkansasonline.com/6919airdogsrescue/