HIGH PROFILE: Terri Hollingsworth, Pulaski County clerk, has made her mark in Arkansas with several firsts 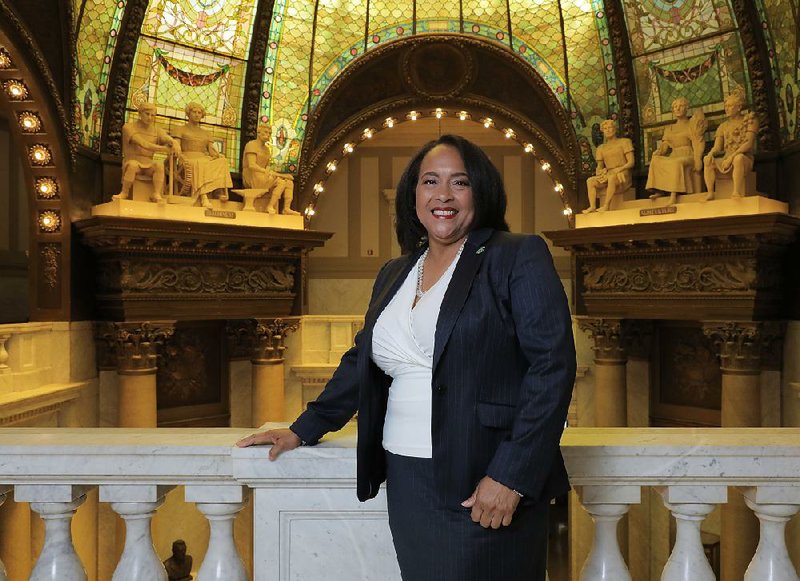 “I am not a quitter and I wasn’t just going to sit there and say, ‘Oh, woe is me. I can’t do anything.’” -Terri Hollingsworth

Terri Hollingsworth's resume is packed with high powered jobs -- from handling special projects for the secretary of state's office to heading up the Delta Regional Authority.

So when her contract with MISO -- Midcontinent Independent System Operator -- ended in 2016, she found herself on the job market. And she kept hearing the same thing -- she had so many contacts she would find a job just like that. But it didn't happen.

"I called people I knew and people I didn't know. I did that," she says. "People would say, 'You have so many contacts.' Well, I called them. I went to see people."

So she took the two jobs she could find to put food on the table: She mixed paint at Home Depot starting at 5 a.m. and she worked at Dave & Sons Cigars & Pipes, a west Little Rock cigar lounge, in the evenings.

"This is not what I planned for my life to be, but life ebbs and flows and you have your ups and your downs and I had to continue to do something to feed me and my family," she says. "I am not a quitter and I wasn't just going to sit there and say, 'Oh, woe is me. I can't do anything.'"

At Home Depot, she ran into people she knew, saying it was "humiliating." Many asked why she was there. A few people said, "'Oh, you want to work there?' Uh, no."

To save money, she and her son, Joshua, moved in with her mother, Ada Hollingsworth. She ended up working at Home Depot for eight months, resigning after she decided to run for Pulaski County circuit/county clerk. But it took some convincing from her mother.

In the Democratic primary, Hollingsworth faced Christopher Crane, the son of Larry Crane who held the seat for four terms before retiring. She won, taking about 65% of the vote. In the general election, she beat Republican Steve Waldren, receiving about 60% of the vote.

"It's awesome," she says of her history-making election.

"Her election demonstrated leadership, determination and the willingness to give of one's self," Scott says.

The mayor adds Hollingsworth possesses "wisdom, understanding and the ability to have a vision" for Pulaski County.

Higgins recently celebrated the 200th anniversary of the Pulaski County sheriff's office, noting it took 200 years for the county to have a black sheriff.

Running for public office is in her genes. Her father, Perlesta "Les" Hollings-worth, was elected in 1972 to the Little Rock Board of Directors -- becoming the second black member of the board. He held the seat until 1977. 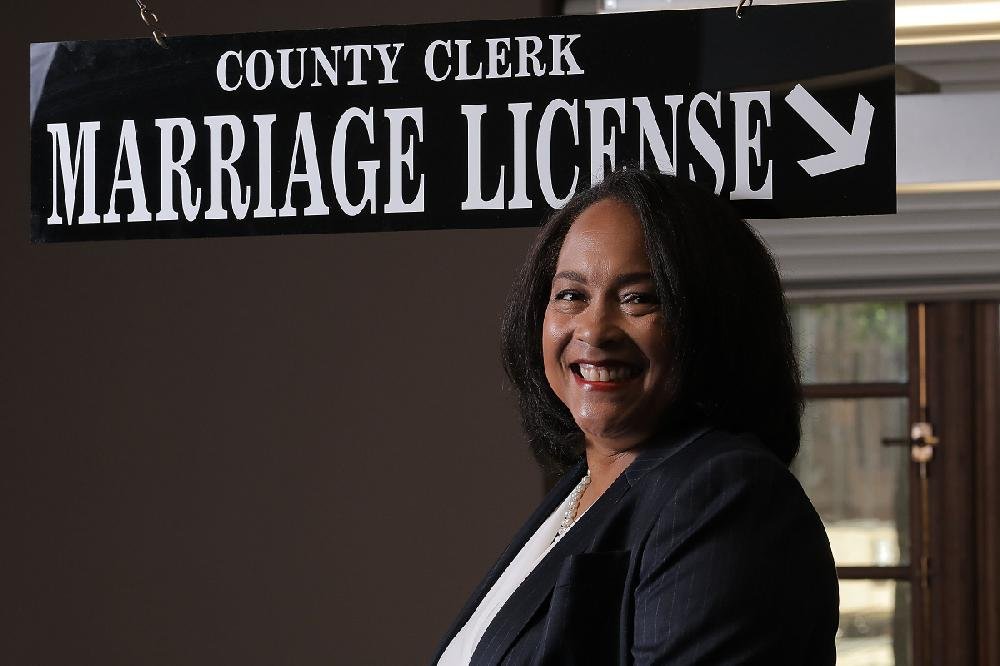 “To this day, I make up my bed first because my father was in the Army and taught us we had to make our beds. You did not want to disappoint him or my mother.” -Terri Hollingsworth

Les Hollingsworth, who died in 2007, was a prominent Little Rock lawyer. When Terri Hollingsworth was 6 years old, the family moved from her great-grandfather's house on South Park Street near Arkansas Children's Hospital to University Park -- the city's first affluent black neighborhood.

University Park -- near 12th Street and University Avenue -- was filled with doctors, lawyers, teachers and other professionals. Harlem Globetrotter Geese Ausbie lived in a house behind the Hollingsworths.

"We would ride our bicycles around and we kept the doors unlocked," Hollings-worth says. "I have fond memories of building clubhouses."

She has three siblings -- Perlesta Jr. is a lawyer in Washington; Tracy is a lawyer in Richmond, Va., and Maxie is a teacher in Houston. None of the girls was given a middle name. Ada Hollingsworth didn't like her middle name, Louise, and didn't want to give her daughters middle names.

For the Hollingsworth kids, it was always a question of where they wanted to go to college, not are they going to college.

"They had expectations," Terri Hollingsworth says of her parents. "To this day, I make up my bed first because my father was in the Army and taught us we had to make our beds. You did not want to disappoint him or my mother."

She got her first summer job working for her father at his law office. He made her and her sister Tracy put two-thirds of their pay in a savings account to use in college.

"He made my sister and me sign a contract. By that time, I was 18. I was very emotional about it," she says. "I was 18 and I am legal and he can sue me. He wrote down all of the terms -- he wouldn't pay for college if we didn't save it.

"I saved up all of my money. My sister didn't save a dime."

So what happened to her sister? "Nothing. That's what made me mad. I played by the rules and she didn't and he still paid for college," she says, laughing.

But did she always play by the rules? Sister Tracy thinks not.

Tracy says her sister would sneak out at night, crawling out a kitchen window, getting in her car, putting it in neutral and rolling down a long driveway to make her escape. She confessed to her crimes after she started college.

"Terri would roll down that very long driveway and wouldn't turn on the lights so she didn't wake up our parents. So our merry little Miss Follow the Rules did not follow the rules all of the time," Tracy says.

After their parents found out about Hollingsworth's unauthorized late-night escapades, they came up with a lengthy list of curfews so none of their other children would "pull something like this," Tracy says.

After graduating from Hall High School, Terri Hollings-worth was accepted at Howard University, a private, historically black university in Washington. Her freshman year was a disaster.

"My grade point average was terrible. I hid my grades from my father." But her grades were mailed to her home and "my father was livid when he found out."

"My father said 'Do you want to work or do you want to go to school?'" she says. "After that I made the dean's list every semester."

She graduated from Howard with a bachelor's degree in city planning. Eventually, she earned an MBA from the University of Arkansas at Little Rock.

"I knew I had to get a graduate degree because that was the expectation of my parents and for myself," she says. "You just couldn't stop with the undergraduate degree if you wanted to excel."

Hollingsworth's first job after graduating from Howard was as a city planner for the city of Little Rock. She also worked for then Secretary of State Sharon Priest and was tapped to be the director of the state Board of Election Commissioners.

"She's got a great personality. She is very outgoing and she likes people," Priest says.

In 1997, Hollingsworth married Little Rock police Sgt. Willie Davis. Their son, Joshua, was born in 2002. The couple divorced in 2004 but still remain friends.

"We are still married. She just doesn't know it," Davis jokes.

"Terri is really passionate," he adds. "Terri is a strong young lady who has a heart for people and a heart for the community."

Davis adds he and Hollingsworth work well as co-parents to Joshua, who will graduate next year from Little Rock Central High School.

"I am really proud of her with what she's done. Work-wise she has always been a go-getter and a person who is concerned about doing the right thing and making good choices in life."

CAMPAIGN TRAIL AND BEYOND

Part of Hollingsworth's campaign focused on the right to vote and making sure Arkansans are registered to vote, saying it is their civic duty and responsibility.

"I ran behind and scared," she says. "I knocked on doors. I called people. We did a texting program. I went to neighborhood meetings. I worked my butt off up until election night."

On the primary election day, she says she had a "feeling in my stomach that we were going to win." By the time she arrived at her watch party at Izzy's restaurant, the election results were in.

"It's a larger-than-life office. Each department is like a separate office," she says. "This is a corporation. It is not just an organization. It's a corporation."

She is looking for ways to make improvements. With that many divisions, some of the employees are isolated and there are some morale problems.

"Employees are stacked on top of each other," she says as she leads a mini-tour of her offices, adding she is looking for office space in other buildings to spread out employees.

Mariah Hatta, community outreach specialist for the circuit/county clerk's office, met Hollingsworth around 2004 when she was working for the state Democratic Party. Hollingsworth was the party's second vice-chairman.

"I think she is really authentic and fun. She can be very serious at work, but she has got a great sense of humor," Hatta says.

One thing about Hollings-worth that makes Hatta laugh is her shoes. Hatta reports that Hollingsworth arrives at work in scuffed-up Birkenstock clogs or rain boots and then changes into 4-inch heels.

"I find that hysterical," Hatta says.

With Home Depot in her rear-view mirror, Hollings-worth says her new job is "awesome but there are a lot of moving parts."

And what would her father think of her new job?

"He would love it. He would be here with me every day," she says, tears coming to her eyes. "He would be so proud and I would see it in his face."

• MY TASTE IN MUSIC IS: I like jazz and old-school R&B.

• A MOVIE I SAW RECENTLY AND LIKED: Aquaman.

• THE BEST ADVICE I'VE EVER RECEIVED: When we were kids, by the ironing board my mother had a note on the wall. It said 'It's OK to be alone.' ... She taught us to be very independent.

• MY SUMMER JOB WHEN I WAS A KID: I worked in my dad's office.

• MY FIRST CAR: My senior year in high school, my father took us to a car lot and said 'pick what you want.' My sister and I picked a Mustang with T-tops, AM/FM cassette radio, leather seats and power windows. My father came home with a red Caprice, no power windows, AM radio. By that time KOKY had switched to FM and we couldn't even listen to KOKY.

• MY LAST MEAL WOULD BE: Lobster, a great salad and a bottle of Veuve Clicquot.

• MY NICKNAME IN COLLEGE WAS: Big Red because I used to wear a red sweat suit that had Arkansas Razorbacks on it all of the time.

• ONE WORD TO SUM ME UP: Tenacious