PORTER BRIGGS: Save the bridge 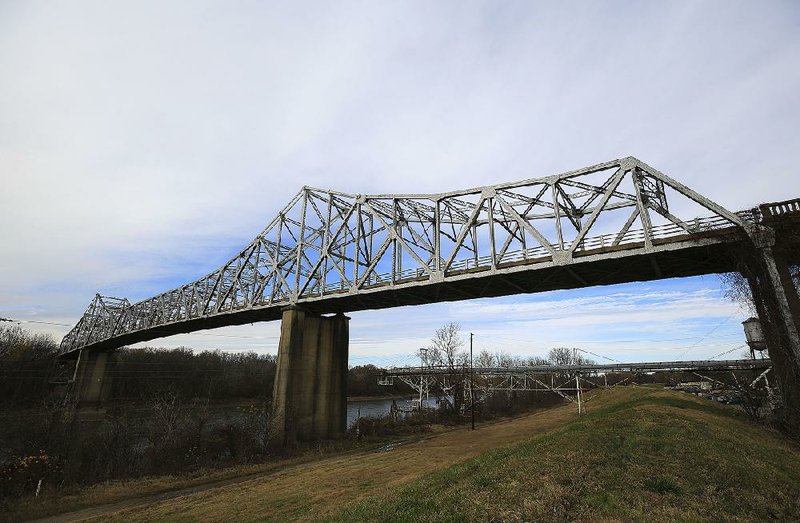 Arkansas Democrat-Gazette/STATON BREIDENTHAL --12/7/17-- A group in Clarendon is trying to convert the old U.S. Highway 79 bridge into a bicycling and walking trail.

The Arkansas Supreme Court decided Thursday that the old U.S. 79 Clarendon Bridge will be demolished.

Its destruction will be an aesthetic and economic tragedy for Arkansas. Never in the history of the Arkansas Delta has such a huge business development opportunity been thrown away and demolished by an agency of our government, the Arkansas Department of Transportation. And we will pay over $10 million to do it. It's an insult to the state.

Worst of all, the bridge will be torn down with the government violating its own rules:

(2) Since the water-flow analysis by the U.S. Geological Survey was completed to support the compatibility study, there have been significant water-flow changes. That is, since that study was completed, a 9,000-foot berm, an integral part of the bridge when the study was done, was removed. This removal of this berm formerly impeding the water flow reduced the bridge's impact on flooding down to only three-tenths of an inch. This changed significantly the "conditions under which a use was permitted." There should be "a new compatibility determination, then and there."

The government rules should be followed. The U.S Geological Survey should perform a new hydrology study. Then a new compatibility study is required. To not perform these requirements would be unlawful and like thumbing their nose at the state of Arkansas, its people and their elected leaders.

I am on the board of a citizens group called Friends of the Historic White River Bridge at Clarendon. For years, we have been working to save the bridge. All the other board members live in or have lived in Monroe County, the home of Brinkley, Clarendon and Holly Grove. Our board members are fine local people who care deeply about our beloved bridge. We are Connie dePriest, Brinkley, president; Susan Caplener, Clarendon, treasurer; Sandra Kemmer, Brinkley, secretary; Gary Padget, Brinkley; Burton and Jeremiah Moore, Clarendon; Sheriff Mike Neal, Brinkley; Johnny Moore IV, Clarendon; Hollis Foster, retired police chief, Holly Grove.

The most popular outdoor sport in America is bicycling. If we save this bridge, we will draw tens of thousands of guests to cycle across the bridge through the Delta. It can bring an unprecedented turnaround in our economy. The Harahan Bridge opened across the Mississippi from Memphis into West Memphis for cyclists and hikers. Already 400,000 visitors have come into Arkansas on the Harahan.

The Delta is the perfect place for cycling. It's flat. It has hundreds of miles of rarely traveled roads. And it has wildlife: 273 species of birds, 44 species of mammals, 76 species of reptiles and amphibians, and 96 species of fish. And we're still looking for the ivory-billed woodpeckers.

Yes, we've lost more population than any other counties in Arkansas, but still there are tens of thousands of God-fearing, friendly, nice people ready to welcome cyclists to our beloved Delta. We're ready for tourist guests to come. We have multimillion-dollar funding to repurpose the bridge for cycling, hiking and birding. The state has committed to maintain the bridge because it will attract tourism dollars. Foundations are ready to throw in their financial support to finance the effort. We're ready.

Tourism is the realistic way to develop the Delta and provide jobs, new business and vitality. Cycling is green and there are few law enforcement problems. We also will develop hiking, Civil War and civil rights tourism, wildlife observation, and water trailing in the 550,000-acre low-water Big Woods. We will always have our old standbys, hunting and fishing.

It now looks as though we are at the last chance to save this bridge. We must not let our government spend over $10 million to demolish this asset on which we can rebuild our Delta economy. We are working to stop this senseless destruction. We ask for your prayers. If you can help, please email me at porter@porterbriggs.com.

Porter Briggs of Little Rock is a veteran of the United States Army and vice president of the Board of the Friends of the Historic White River Bridge at Clarendon, a 501(c)3 nonprofit.