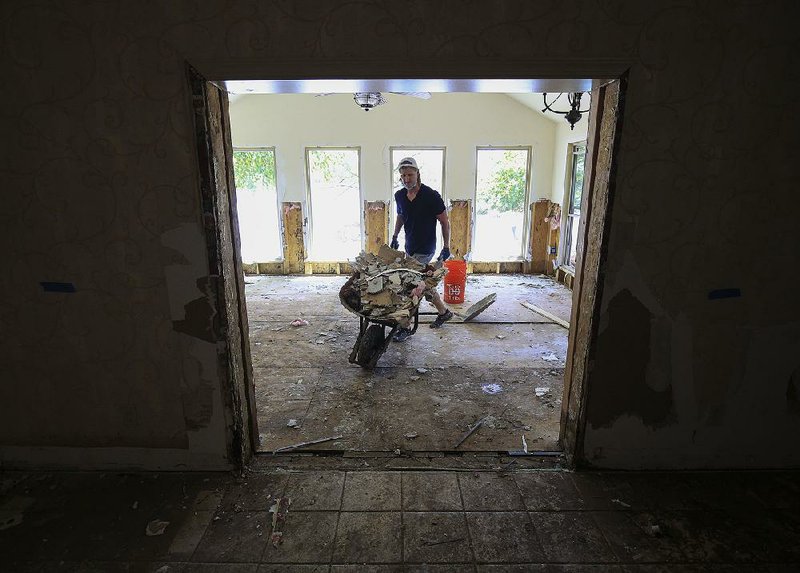 Ryan Bennett on Monday afternoon tears out Sheetrock from his grandmother’s house on Willow Beach Road in North Little Rock after floodwaters got inside last week. ( Arkansas Democrat-Gazette / Staton Breidenthal)

The Federal Emergency Management Agency and various state agencies will be on the ground in the coming days as plans take shape for local and federal aid for residents and communities affected by recent flooding along the Arkansas River, officials said Monday.

Heavy rainfall in Kansas and Oklahoma led the U.S. Army Corps of Engineers to release water from reservoirs in both states that eventually made its way down the Arkansas River, leading to severe flooding throughout the Arkansas River Valley. Hundreds of homes and businesses were flooded as the water worked its way from western Arkansas through central Arkansas and into the southeast part of the state.

Hutchinson estimated in a letter sent Friday to Trump that Arkansas would need more than $8 million in cleanup funds and more than $100 million for infrastructure repairs. That estimate could change as water levels continue to drop and reveal the extent of the damage, Hutchinson said. 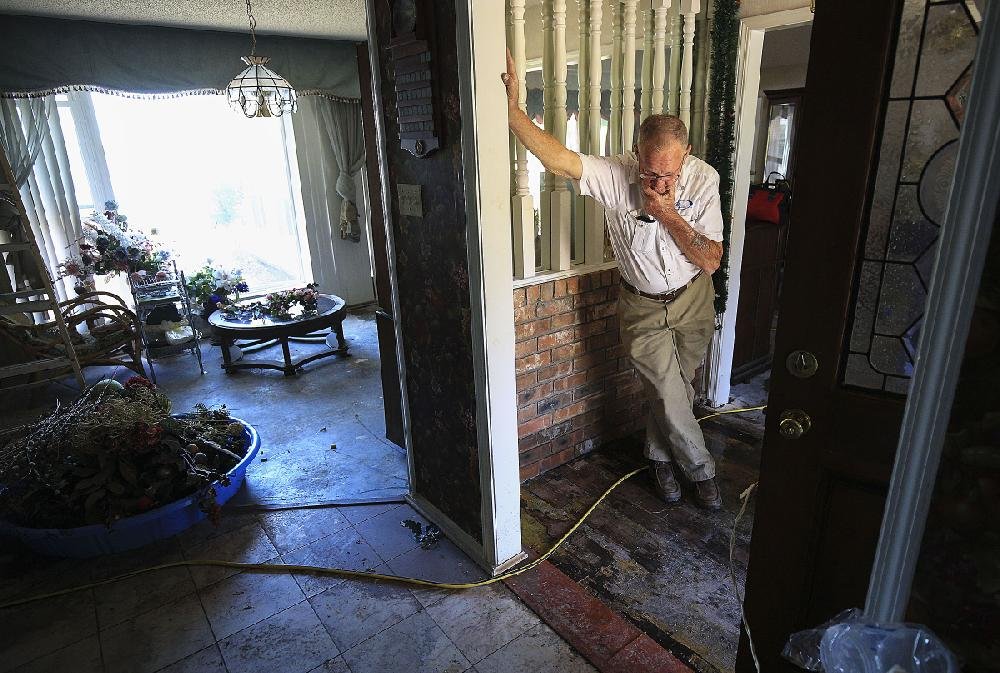 Floyd Haley talks Monday with an electrician about repairs from flood damage to his house on Willow Beach Road in North Little Rock.

A FEMA spokesman said the agency already had staff members in position in Arkansas before Saturday's emergency declaration.

"We have Disaster Survivor Assistance teams out in each of the counties designated for FEMA's Individual Assistance Program," said Robin Smith, spokesman for FEMA Region 6. "They will be going door to door in affected areas to assist survivors get connected with potential assistance, to answer questions about the types of help that is available, help survivors apply for state and federal assistance, as well as referrals to community partners."

The workers will be in teams of two or more. FEMA personnel will have photo badges and will wear FEMA vests or shirts, officials said.

"Additional staff for the variety of other FEMA programs are being deployed here currently and should be on the ground later this week," Smith said.

FEMA and state agencies are also making plans to establish disaster recovery centers in each of the eight counties affected by flooding, said Melody Daniel, spokesman for the Arkansas Department of Emergency Management.

"FEMA will handle federal aid and state agencies will be there as well, so it will be kind of a one-stop shop for everyone who needs assistance," Daniel said.

No centers had been opened as of Monday afternoon, but they will be in place soon, she said.

"They will not all be opened at the same time," Daniel said. "They will be in place for three to five days before moving to the next location." 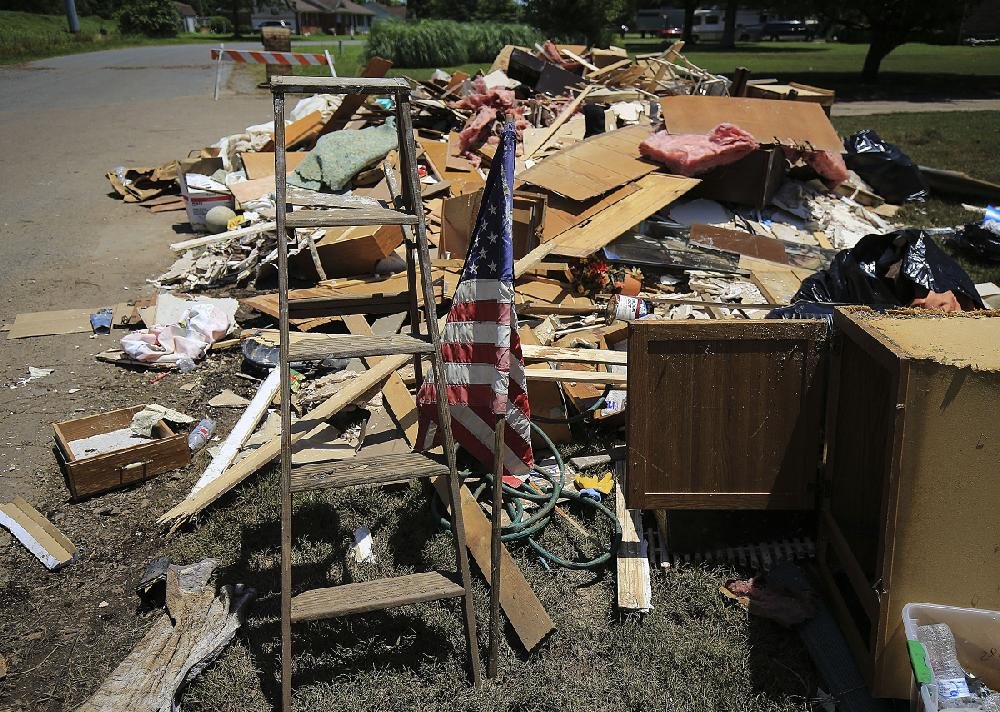 FEMA is considering establishing an office and support facility to assist Arkansans. Agency officials have twice toured a building formerly used as a Southwest Airlines reservation center at 1901 Kellett Road, which is adjacent to Bill and Hillary Clinton National Airport/Adams Field.

FEMA officials checked out the facility May 31 and June 3, according to Greg Garner, the business and properties manager for the airport, which owns the vacant property.

"They have an interest in possibly using this facility as an office and support location from which they may assist those affected by flood waters in this area," Garner said in a memorandum.

He said the agency typically sends between 200 and 300 people to similar facilities, usually under a three-month or six-month lease. FEMA will then potentially lease the facility on a month-to-month basis not to exceed a year, Garner said.

Garner's memorandum was part of the agenda package for a Little Rock Municipal Airport Commission committee. Airport staff members want commission approval to allow them to "expedite and execute a temporary lease, and take other steps as needed, for FEMA to utilize the facility" if the agency wants to use the building, according to the memorandum.

"Staff has been advised that we will have a very limited amount of time to complete a lease and accomplish the requested modifications," Garner said.

FEMA would reimburse the airport for any modifications requested, he said.

The federal agency will cooperate with the Arkansas Department of Emergency Management and other state agencies in the coming weeks.

"On average, FEMA outnumbers state agencies 17-to-1, but the state is still the decision-maker," Daniel said. "This is still a state effort."

Karen Santos, a spokesman for Fort Smith, said about 500 homes had been flooded in the city and another 45 elsewhere in Sebastian County. She said FEMA personnel had been on the ground in the county for a couple of weeks.

"They have been working closely with Sebastian County Office of Emergency Management," Santos said. "They joined our briefings, and more are supposed to come in."

Cleanup is ongoing within the city, Santos said, but rural areas in the county might have different needs.

"We haven't been in contact with FEMA yet, but we expect them in the next few days or next week," Thone said. "From what I understand, they will send a preliminary team here and then set up a mobile office and assess everything."

Thone said the county is trying to clear some of its flooded roads.

"We have been hauling rocks and moving a lot of mud," he said. "We are trying to get people back to their homes as quickly as possible. Of course, we still got some water on some of the roads as well."

With the Arkansas River now below flood stage in central Arkansas, the Little Rock Department of Parks and Recreation and the Public Works Department have turned efforts toward cleanup and repair of streets and nearly 1,300 acres of parkland.

"It is going to take some time to get all of our parks cleaned up so that we can return to normal operations, so we are asking for patience during this recovery process," Mayor Frank Scott Jr. said in a news release. "Even when the water is gone, it will take some time for the ground to dry out so that we can get equipment into the areas that need the work."

Even though the river crested in Pendleton and Pine Bluff over the weekend and the water in Little Rock fell below flood stage, Daniel said the Arkansas Department of Emergency Management continues to operate under disaster response mode.

"We are going to still be in response until the river recedes in Pendleton and Pine Bluff," she said.